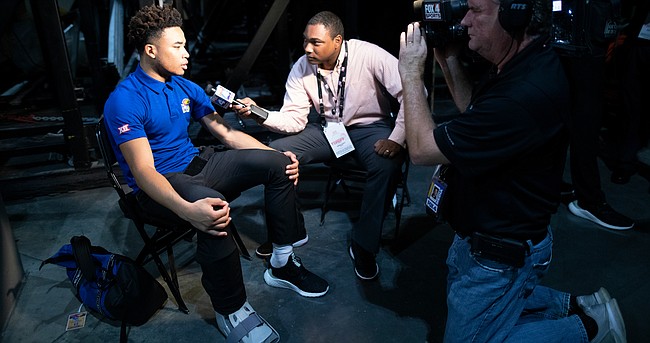 Kansas point guard Devon Dotson sits for an interview during Big 12 Media Day on Wednesday, Oct. 23, 2019 at Sprint Center in Kansas City. Dotson is wearing a boot on his right foot after sustaining an injury during practice on Tuesday.

Kansas City, Mo. — Kansas sophomore Devon Dotson rolled his ankle during Tuesday’s practice and has spent the past couple of days with a walking boot on his right foot.

His status for Thursday’s game exhibition opener against Fort Hays State — 7 p.m. on ESPN+ at Allen Fieldhouse — is uncertain.

“He probably will not play,” KU coach Bill Self said Wednesday at Big 12 media day at Sprint Center. “It’s a day-to-day thing. I can’t anticipate him missing more than three or four days.”

KU junior Silvio De Sousa fell on Dotson’s ankle and, according to teammates, Dotson immediately hopped out of the collision and ran off the floor.

“I was a little worried,” said senior center Udoka Azubuike, no stranger to injuries himself. “He ran all the way off the court and I was like, ‘I hope he’s all right.’”

According to Dotson, that’s exactly the case.

“I’m good,” the KU sophomore said Wednesday. “I tweaked it a little funny but I’m fine. I’m taking it day by day and not trying to rush anything.”

“If Devon can’t play, Marcus needs to be in the game because we really don’t have a secondary ball handler behind him that could run a team. I don’t know that (Garrett’s) a point guard, but he certainly has point guard skills. He’s good with the ball.”

With Dotson likely out, the KU lineup in the exhibition opener will not look anything like the Jayhawks expect it to when the regular season opener rolls around on Nov. 5.

Garrett, Agbaji and Azubuike are locks to start. But the identity of the two other players who will be out there with them remains a mystery.

Self said Wednesday that the battle between Silvio De Sousa and David McCormack at the 4 spot “varies day to day.”

Self also said that senior graduate transfer Isaiah Moss recently reinjured his tweaked hamstring and also might not be available for KU’s exhibition opener, leaving the starting 3 spot to a freshman.

“It’ll be Christian (Braun), Tristan (Enaruna) or Jalen (Wilson),” Self said. “One of those three. So in your probable starters, put seven guys.”

As for why he would not start both De Sousa and McCormack, Self said simply, "We're not going to play three bigs (at the same time) ever, I don't think."

A little less than a month after proclaiming his excitement over the start of another season following the Jayhawks’ first official practice of the season, sophomore guard Ochai Agbaji said Wednesday that the arrival of an actual game at Allen Fieldhouse had him even more excited than before.

“I mean, it’s exciting, obviously,” said Agbaji, the Kansas City, Mo., native whose father was inside Sprint Center for Media Day on Wednesday. “It felt like I was just playing. Last season’s still fresh on my mind. It came so quick and I’m just ready to get it going again. It’s good to be back.”

Asked if he thought his team was ready to tip it off for real, Agbaji said the past few weeks of practice had them fully prepared.

“We’ve been working hard, pushing each other every day, not making it easy, the guards and the bigs,” he said. “And that’s just going to make us better in the long run so I think we’re ready.”

Asked what he thought Self’s response would be to the same question, Agbaji laughed.

Wednesday’s conference showcase came two days after the announcement that one of the best rivalries in Big 12 history was back on the schedule.

With KU and Missouri slated to face off in men’s hoops in each of the next six seasons starting in 2020, the topic was pretty popular at Big 12 media day in a city where Kansas and Missouri competed for the title of top dog.

“I think it’s really special for Kansas as a program and Mizzou as a program,” Agbaji said on Wednesday. “That rivalry has a lot of history and tradition behind it and means a lot to a lot of people. Knowing it’s actually coming back, it’s going to be fun playing in that game.”

Added Self, who was asked about the response he had heard over the renewal of the series: “I think it’s been more positive than not positive. I’m actually excited about it. I miss the game. I miss the energy. I miss the fans’ hatred for one another, which doesn’t pass down to the coaches or players but certainly that interest level I believe is something that kids go to college to play in games like that. I’m excited to get that back.”

On Tuesday, the University of Houston announced that former Jayhawk Quentin Grimes had received a waiver from the NCAA for immediate eligibility at his new school, making the 6-foot-5 sophomore a factor for the Cougars this season.

“I think he deserves to be eligible,” Self said Wednesday. “I’m very happy about that and I hope he knocks it out of the park. We all do. And certainly he’s playing for a guy that’ll get the most out of him so, yeah, I think that’s very positive.”

Added Dotson, who teamed with Grimes in a record-setting freshman debut at last season’s Champions Classic in a win over Michigan State in Indianapolis: “I’m happy for him, excited for what’s in store for him and wish him nothing but the best.”