The 2017 season fell far short of the type of success Kansas football players envisioned, but their efforts within a challenging 1-11 campaign didn’t go overlooked by the Big 12’s coaches.

Just an honorable mention choice as a sophomore a year ago, according to the coaches (the Associated Press put Wise on the second team in 2016), Wise’s dominant redshirt junior year catapulted him all the way to the first team. 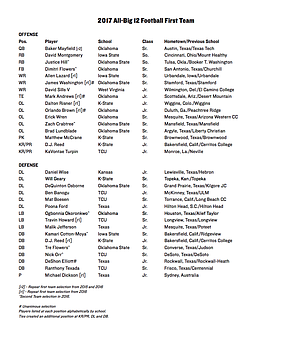 Johnson, a 6-foot-5, 245-pound passing target and blocker from Basehor, caught a career-best 30 passes in his final season, contributing 363 receiving yards and a touchdown.

Armstrong, after a breakout 2016 season that brought him All-Big 12 first team honors and led to his selection as the 2017 Preseason Defensive Player of the Year, registered 63 total tackles, 9.5 tackles for loss and 2.0 sacks. The junior from Houston also was credited with seven QB hurries, four pass breakups, three forced fumbles and a fumble recovery.

Dineen delivered his best collegiate season to date for KU, leading the Big 12 not only in total tackles (135), but also solo tackles (91) and tackles for loss (23). A hometown contributor from Free State High, Dineen also made 2.5 sacks, two pass breakups and two QB hurries.

Wise also garnered an honorable mention in Defensive Lineman of the Year voting.

All of the Kansas standouts, of course, would’ve preferred victories to accolades. Said Wise of the disappointing season, after KU’s year ended with its 11th straight loss: “We just couldn’t get everything to click at the same time and consistently. But obviously going into the season we were not expecting to be 1-11. We come in every day with a winning mentality and obviously heads up, heads high. We’re going to keep swinging and build on this into next season in the offseason.”

OU defensive end and linebacker Ogbonnia Okoronkwo was the fifth player from Oklahoma to earn Defensive Player of the Year, which he shared with Texas linebacker Malik Jefferson.

Defensive end Ben Banogu was the first TCU player named as Defensive Newcomer of the Year.

Baylor QB Charlie Brewer was the first Baylor player selected Offensive Freshman of the Year since Robert Griffin in 2008. TCU wideout Jalen Reagor, who shared the honor with Brewer, was the first TCU player to earn the honor.

Defensive tackle Ross Blacklock was the second TCU player to be named Defensive Freshman of the Year, along with Devonte Fields in 2012. Linebacker Kenneth Murray, who shared that distinction with Blacklock, was the fifth Oklahoma player to earn the distinction.

Yay. This season is now a success.

Congratulations to all of the Jayhawk's who received honors from the voting members. As bad as the season turned out, it's good to see that the voter's seen deserving Jayhawk players. Had more OL'man been up to Big XII caliber, then maybe the QB's could've produced the passing yards to S. Sims to have been nominated as well. Obviously, there's still a ton of room for improvement.

I admit, I am shocked to see that QB Recruit Tune re-committed to Kansas. I'm happy to see this. Now, can Kansas recruit some damn good OL recruits to build a long term successful foundation.

Perhaps, it might be best to recruit HS Tightends and convert them to OL candidates (as what was done a few years ago with Tanner Hawkinson).

I am corrected...Wise had a better season this year versus last year. Sims likely would have without the injury. Dineen kind of was forced to with the way they scheme.

Any one else I missed?

Congrats on the achievement fellas! Keep grinding and good things will come for KU Football!

I wonder if the person who said the D would be horrible if Tornedon played will admit to his ignorance. If so my guess is they will also try to twist it into blaming Beatty for the results because they are bent on being negative.

The positive flip side is that these awards show that Beatty and staff have done a great job at building the roster and developing players because we have not had highly ranked classes. This also shows how depth is so important in football.

Are you saying the defense was not horrible?

Jeff - No, just that it wasn't because of Tornedon or because we had to play him. He apparently was one of the better players on the team and conference.

For those with a short memory. Beaty was hired to rebuild the team. In September of 2015. "Sports Vice wrote "Kansas enters this season ranked No. 124 out of 128 teams. The closest powerhouse conference team is fellow also-ran Iowa State, ranked No. 100. Division I college football teams are allowed 85 scholarship players, and the Jayhawks will only have 60."

In 2015 we ended up with about 75 players on the roster due to a bunch of walk-ons. From what I recall we only 13 Seniors and 12 Juniors and only 18 scholarships to give going into 2016 because the other 67 had been burnt by Weiss. That is how bad it was and maybe is. But will it be that way next year. IMO, I don't think so.

Next year, we subtract off this year's very weak Senior class. and add the 13 recruits (8 Freshmen, and 5 Junior Transfers), and then hold up and add back in the rest of the Red Shirts including the lone Senior red shirt player, it appears in 2018, We go from a team of 60 back in 2015 to having 65 Seniors and Juniors and well over 100 players in the system.

In three years, what would you have done different? To me it looks like 2017 was a sacrificial year. I am guessing that in 2018 we will be redshirting a bunch of Freshmen again. It will be interesting to see how this team does in 2018.

The roster and number of scholarship players is always a hard number to find. And certainly the total size of the roster is important.

But the real meaningful number is how many of the 85 scholarship players were originally D-1 caliber recruits or have been coached up to become legit. That takes inside info and a player by player evaluation.

And just a thought about your large projected junior class. Assuming they're all on scholarship (I don't have any idea - it's just for the sake of discussion) when they leave after their senior year it could create a large hole in recruiting...losing 37 scholarship players and only being able to replace them with the scholarship max of 25...a net loss of 12.