With the opening Saturday of the Kansas football season now less than a week away, either Peyton Bender or Carter Stanley will soon find out he will start at quarterback for the Jayhawks against Southeast Missouri State.

With eight months of competition in their rear-view mirrors, both Bender, a junior transfer who began his career at Washington State, and Stanley, a redshirt sophomore who started KU’s final three games in 2016, have their merits. Bender is touted for his quick release, Stanley can extend plays with his mobility, and both reportedly have protected the ball amazingly well throughout preseason practices.

While head coach David Beaty and offensive coordinator Doug Meacham have kept their opinions on each QB’s abilities mostly concealed, the last time Kansas players were made available to the media, each quarterback was asked what he had done in recent weeks to make his case for the starting gig.

“I think that’s maybe a better question for the coaching staff,” Bender began. “But like I’ve said before, I just go out there and I don’t try to do too much. I don’t try and make things happen. I just play my game and do what I’m taught: go through my reads and try to get the ball to the right guy. I just do that every day and if I can do that then I’ll be able to play at a high level.” 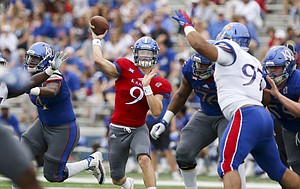 Team KU quarterback Carter Stanley (9) throws to a receiver during the first quarter of the 2017 Spring Game on Saturday, April 15 at Memorial Stadium.

Like Bender, Stanley also declined to get into many specifics of the final stage of their race toward the No. 1 spot on the depth chart.

“I think just both of us are progressing, learning what we made, mistake-wise, maybe the day before,” Stanley said. “And just being in the film room and trying not to make that same mistake again. Just moving forward and taking the next step. I think we’ve both done a good job of that. Coaches have done a great job of pointing it out and making it easy for us.”

Assuming Beaty announces a starter at some point prior to kickoff, Bender and Stanley shortly will be through answering questions on the matter. But both stated they haven’t grown tired of addressing their battle during the past several months.

“That’s part of the competition,” Stanley said, “and definitely just handling yourself.”

Both, of course, realize how close they are to clarity on their roles for the opener and beyond.

“There’s only so many days left until Game 1,” Bender said. “So we’ll see. I don’t know when it will happen. I haven’t heard anything from the coaches, but I’m just trying to go out there and do what I can do, play to the best of my ability.”

Stanley spent most of 2016 as a backup for Kansas — a third-stringer for the bulk of it, in fact — before usurping Montell Cozart and Ryan Willis to start the final three games. As a redshirt freshman the 6-foot-2 Vero Beach, Fla., native completed 93 of 156 passes (60 percent), with six touchdowns and six interceptions.

In 2015, as a redshirt freshman at Washington State, Bender was a backup, and played in five games. The 6-1 Fort Lauderdale, Fla., product went 53-for-91 (58 percent) in Mike Leach’s Air Raid offense, with three touchdowns and four interceptions.

As a sophomore at Itawamba Community College the following year, Bender’s production took off. As a juco QB in Mississippi, he connected on 211 of 324 passes (65 percent), averaged 303.7 passing yards a game, and racked up 21 TDs, with four interceptions over the course of nine games.

I've said it before, I'll say it again: keeping up this silly QB competition charade, yet again, all the way up until gameday, is a distraction and a mistake. The starting QB doesn't know who he is, can't fully visualize and focus leading the offense onto the field and take the time required to digest that pressure and get used to the weight of it. And the worst part is that the o-line and receivers don't know who will they'll be protecting or catching throws from and can't do the same. Giving two QBs equal snaps all through the Spring and Fall is wasteful. Practice time is limited. It's physically and mentally preparing for two different situations simultaneously, when only one will actually happen. That's wasting 50% of your prep time. Pick a guy already. Worst case scenario, you hurt Mr. 2nd-string's feelings a little bit and he either steps up, works harder, and earns the spot back, or he doesn't. Beaty thinks that NOT naming a starter creates better competition at a position. Where did he come up with that BS??? I never worked harder in my life at a sport than when I lost my spot to someone else. And then when I earned it back, I worked ten times harder to keep it. Letting Bender and Stanley hold hands and skip through the Spring and Fall being patted on the back and constantly told they were on totally equal ground didn't help either of them.

Doesn't really matter who starts this Saturday, but for my guess it will be Bender.

Why Bender? Since there has reportedly been no "separation" thus far, I believe it is an important optic for KU to be viewed by potential quality transfers as providing an opportunity in game (not practice) conditions. Since Carter showed promise in the last 1/4 of last season, he has allowed the staff to play the wait-and-see game with all of us. Who knows, by year's end it may be Starks out there.

In the end, it is about how one finishes that counts not the start/beginning.

I too think it is a mistake to not let the starting unit know who will be their leader but as for us and our opponents, keep us guessing. Ok by me, prefer it that way. Its only the sync with the moving parts of an offense that concerns me, not the "drama". I hope the next week reps with the starting unit go to one guy...whoever that is.

Absolutely. To heck with earn it. Let's just pick favorites, or draw straws if one player hasn't played better than the others.

But at least we're not silly enough to be believe that we're going to make it through the season without the starting QB getting injured, so at some point having 2 QB's prepared for the season will pay off for us.

I'd agree it's a distraction if we were playing someone good this week. I don't think the distraction lasts past Saturday and won't carryover during the real season unless someone just stinks it up.

I think it may be a mistake too but I understand Beaty's reason for doing it. Not revealing a starter keeps the pressure off of the #1 who would have had to field tons of questions by the media all August long.