Team Jayhawk running back Khalil Herbert (10) charges up the field on a run during the third quarter of the 2017 Spring Game on Saturday, April 15 at Memorial Stadium.

Less than four weeks away from his team’s season-opener, Kansas football coach David Beaty might not be able to characterize any of his team’s running backs as a definitive No. 1 option on the depth chart.

But as far as Beaty is concerned, the offense would be better off with more than one featured back.

Whether sophomore Khalil Herbert, junior Taylor Martin, freshman Dom Williams or junior Deron Thompson gets the starting nod Sept. 2 versus Southeast Missouri State, Beaty is convinced the running backs who play reserve roles will be just as crucial that week and throughout the fall.

“I think you'd like a primary player at every position if you could,” Beaty replied, when asked if Doug Meacham’s Air Raid offense needed a main ball carrier. “You'd like to, but we're going to have to use more than that.” 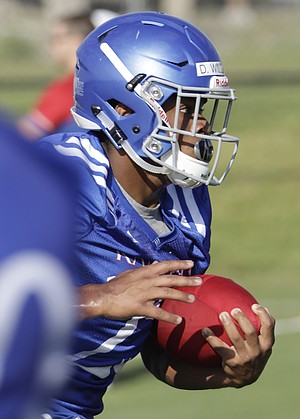 Kansas freshman running back Dom Williams stares straight ahead during a drill in the team's second fall camp practice on Tuesday, Aug. 1, 2017.

When Beaty thinks about the Big 12’s best offenses, he associates them with the ability to send in more than one talented tailback. While certainly not about to compare any combination of his current Jayhawks to the likes of Oklahoma’s Joe Mixon and Samaje Perine, who combined to rush for more than 2,300 yards in 2016, he would like to see KU follow such a backfield-duo blueprint.

Predictably, Meacham shares that philosophy when it comes to his ideal offense.

“I like a one-two punch. I like a little scat, twitchy guy and I like a bigger guy — a hit it up in there guy — where you have two different flavors,” Meacham said.

While the backfield hasn’t felt quite as crowded as expected during preseason camp, as junior Octavius Matthews (undisclosed injury) has yet to be cleared to practice, Meacham and Beaty still have numerous choices. Herbert (4.3 yards a carry in 2016, with four touchdowns) and Martin (3.6 YPC, 4 TD’s) offer the most experience.

Martin, now a junior, has long been considered the fastest player in the program. While Beaty often has brought up true freshman Williams of late, he said Martin shouldn’t be overlooked. 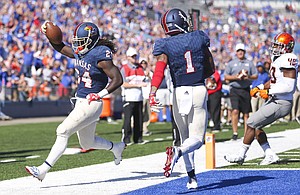 “I think he's gotten better because of all these guys around him,” Beaty said of the 5-foot-10, 200-pound Martin. “It's really just made him become more of a complete back, which is good.”

“The competition just helps bring out the best in all of us,” Herbert said. “Each day we go out there, somebody makes a play, that next guy wants to make a play.”

That collective mentality likely has played a part in Thompson, a Wichita native who played sparingly at Colorado State from 2014-15 before transferring to Kansas, continually catching his head coach’s attention at preseason practices.

“Deron Thompson, I mean, that dude, every time we put the ball on the ground, he's going to make a big run somehow, some way,” Beaty reported. “He's so quick. He's fast. He can cover a lot of ground. He just runs away from people.”

Meanwhile, Meacham describes himself as cautiously optimistic about the coming impact of Williams, a four-star prep recruit from Independence, Texas, if only because the coordinator knows first-year running backs tend to have ball security issues.

Still, Meacham said the 5-10, 190-pound Williams possesses “some natural shake that can make you miss,” as well as the ability and patience to run inside or outside on a zone rushing call.

Herbert likes seeing so many in his position group showing at least flashes of first-string abilities.

“I think it’s a really good thing for us, knowing that the guy right behind me or the guy in front of me is ready to go, so we can sub in and out, get breaths if we’re tired,” Herbert said.

While KU appears to have four in the mix for touches at this point, Beaty said he would like to have five capable backs, because of the physical toll taken on backs, both through carries and pass protections.

“And really you'd like to be able to use most of those guys, to be able to keep the wear and tear down,” the third-year head coach added.

It is nice to see Deron getting some attention and would be great to see him also produce an instate walk on route.

TK - any chance there would be an article (series?) on the players contributing to the program that came in a non-traditional route such as walkons?

Kezelee Flomo has got to be the featured back. Go Flomo!

Interesting article from CBS Sports about the most overrated and underrated coaches in college football. An anonymous coach ranked David Beaty among the most underrated.

I tend to trust Beaty more than the previous two coaches. There is some talent on this team and it has translated on the field, particularly last season with some of the WRs, at DE, and at least one of the defensive backs. Mike Lee, for example, impressed me last year. We just need a guy at QB who can make decisions quickly and consistently so that the opposing defenses become frustrated.

I agree. There's no doubt he can recruit and I think Beaty delegating more of his duties to his assistants is good for the program moving forward. I'm willing to settle in and trust the process.