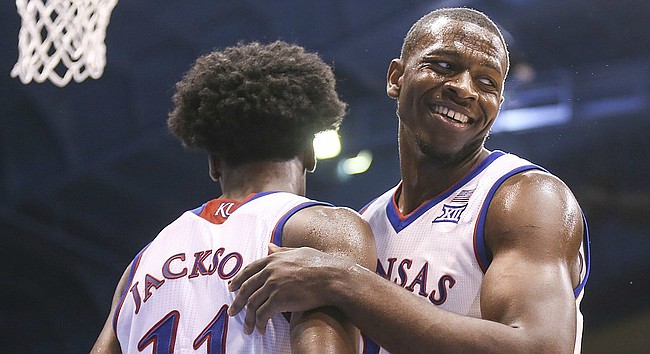 Kansas forward Dwight Coleby (22) gives some love to teammate Kansas guard Josh Jackson (11) after a near explosive dunk by Jackson during the second half, Tuesday, Nov. 1, 2016 at Allen Fieldhouse.

In the time that passed between first checking into KU’s victory over Georgia on Tuesday night and another gameday morning, Kansas junior Dwight Coleby made his first real contribution to the KU lineup, spent an entire night smiling about it with his father, who was in from the Bahamas to see it, and counting down the minutes until he could get out there and do it again.

Now that the moment has arrived — the Jayhawks (4-1) are slated to play host to UNC-Asheville (3-2) at 7 p.m. Tonight at Allen Fieldhouse — Coleby is hoping his next trip to the scorer’s table will lead to something close to the two-point, four-rebound, four-block effort he turned in against Georgia, which earned him the unofficial honor of Big Man of the Game from KU coach Bill Self.

“Yeah, of course,” said Coleby following the Georgia victory when asked if he wished he could play again immediately. “I want to get back out there and try to prove myself some more and do better.”

In the same breath, the big man who spent the first few games of the season watching from the bench while still fighting to recover — mentally and physically — from an ACL tear he suffered in 2015 admitted that it’s not a given that he’ll perform quite as well the next time out.

“Yep. I’ll probably be too excited and probably mess up and people will be like, ‘What you doing,’” he joked.

Regardless of what Coleby’s role becomes from here, the Bahamas native with the soft smile and easy-going personality impressed his teammates and coaches by being ready when he was needed.

Even if that is the extent of his role this season, the rest of the Jayhawks clearly value it and appreciate Coleby’s willingness to fill it.

“All of them was happy about it, telling me it’s good that I stayed ready and all that,” Coleby said of his teammates. “I’ve been doing this, I feel like, forever in college. And I always stay ready, just staying relaxed and staying focused and doing what coach wants me to do.”

Added KU coach Bill Self: “He’s never gonna score a lot of points. But at least he was able to plug the middle some for us and be a little bit of a presence down there.”

Whether Coleby will get another chance against Asheville tonight remains to be seen, but the Bulldogs (3-2) enter tonight’s game with a hint of familiarity to them.

Kansas and UNC-Asheville already have two common opponents on their schedule, with the Jayhawks defeating both Siena and Georgia and the Bulldogs splitting with those two foes.

Kansas junior Devonte’ Graham, who hails from Raleigh, North Carolina, said he did not know anyone on the UNCA roster and added that it would not have mattered even if he did.

“Every game means just as much as the next game,” Graham said.

Dwight definitely looked better to me in the UGA game than he did in the previous game. He didn't seem to be dragging his repaired leg nearly as much as he had previously. During his first action, my thought was of Coach's comment about him not quite being ready. My guess is it is as much or more about his confidence in his leg to respond appropriately as it is about him being back to full strength. Glad he is becoming more comfortable and effective. It is nice to have the extra depth, regardless of whether he is the depth or someone else.