Is point in Svi’s future? ‘I don’t think so’

Sviatoslav Mykhailiuk, who played some point guard in practice this season and also worked as emergency/experimental lead guard in a game or two, was asked last weekend in Louisville, Ky., if he might become a true combo guard if he decides to stay for a third season at Kansas University.

He knows his future in the pros likely consists of being a deep three-point threat at the shooting-guard/small-forward positions.

“I would try to,” he added of playing some point if asked. 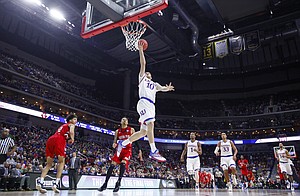 Mykhailiuk missed the only three he took and committed one foul in a scoreless seven-minute stint in KU’s season-ending 64-59 loss to Villanova on Saturday. For the season, he averaged 5.4 points a game off 45.2 percent shooting. He made 37 of 92 threes for 40.2 percent.

Mykhailiuk, who turns 19 in June, may yet take advantage of a new NBA rule that allows players to attend the NBA combine in May and one workout for a pro team in an attempt to learn one’s status for the upcoming draft. A player can still return to school if he does not sign with an agent. The final decision for players could come as late as the end of May.

Kentucky coach John Calipari recently said all of his players, including walk-ons, would declare for the draft to see if they net an invite to the combine.

“I am not trying to think about that now,” Mykhailiuk said of his future after the Jayhawks’ Sweet 16 win over Maryland.

None of the Jayhawks who are considered possible early entries, in fact, were willing to discuss their futures during the NCAA Tournament. Wayne Selden Jr., Cheick Diallo, Carlton Bragg Jr. and Brannen Greene all within the past couple of days or weeks told the Journal-World they were not thinking about next year right now.

On a lighter note, Mykhailiuk was asked if he has become a national hero in Ukraine considering KU’s highly successful season.

Asked if the President of Ukraine knew who he was, Mykhailiuk said with a smile: “I don’t know. I’ve not ever talked to the president.”

KU coach Bill Self conceded after the Jayhawks’ loss to Villanova that some underclassmen could leave the program in addition to scholarship seniors Perry Ellis, Hunter Mickelson and Jamari Traylor and walk-on Evan Manning. He said he had no idea when decisions would be made.

“Whatever Wayne decides to do, we will support him as one of our brothers,” junior point guard Frank Mason III said. Mason is expected to return for sure, with sophomore Devonté Graham as well as Lagerald Vick, a freshman shooting guard with great explosiveness. “Wayne is somebody we can always count on, who played hard every night and had a great season.”

The Jayhawks are still in the running for combo-guard deluxe Josh Jackson, the No. 1 prospect in the country according to Rivals.com, who would be projected as an immediate starter. He told Eric Bossi of Rivals he hoped to have a decision within two weeks.

KU is bringing in a pair of forwards in No. 27 ranked McDonald’s All-American Udoka Azubuike and Mitch Lightfoot, who is rated No. 117. KU also is in the running for 7-footer Thon Maker, who is projected as an immediate impact player. Also figuring to return for sure is Landen Lucas, the 6-10 honorable mention All-Big 12 player who improved leaps and bounds his junior season. He’ll be joined on the inside by Dwight Coleby, a 6-9 junior transfer from Ole Miss, who is also expected to contribute immediately.

There are other prospects, obviously, who could be landed in recruiting.

As far as putting this season to rest, Self said of the Big 12 champs, who reached the Elite Eight: “I don’t want to reflect now. I’ll look back ... coaches probably know better than anybody what team ceilings are. These kids played pretty close to it the last couple months. I don’t know with this particular group it could be a special year without getting to Houston (Final Four). Nobody could say these kids didn’t have a great year. They battled hard, almost always rose to the occasion when they needed to. Tonight we played a team that is scrappy also. They made a couple more plays.”

Seldon is projected to go very late in the 1st. If he stays and improves, he could be a lottery pick. I'm thinking he stays, do you?

If he stays, where in the world would Jackson start with Graham, Seldon, and Svi returning? The only answer I can see is benching Mason. Or not getting Jackson.

ive been thinking Jackson only comes if Selden leaves. Plus if Selden leaves, there doesnt seem to be enough time for both Svi and Greene to be happy, so decent chance one of them gone one way or another. i would still lean towards Selden leaving though think he'd benefit from another year.

I'd much rather have a senior Selden than a freshman Jackson. I'd like to keep everyone if we can. Not sure anyone but Selden has a chance of gaining anything by leaving this year.

Hopefully that preference would be shared by all KU fans, if it were an either/or choice.

However, it would be Jackson that would benefit the most should Selden returned to KU. If Selden returned AND signed Jackson, Self could play 4 around 1, which would be truly deadly. Selden is a great leader and Jackson would learn a tremendous amount from him. From what I know of Jackson, he does not need to be a starter. So long as he gets 20 mpg and keeps showing his game, he's OAD.

Selden's draft stock is as high as it's going to be. This is a pretty weak draft class and Selden's not going to make the leap Hield and Valentine did because Selden in an undersized 2/3 hybrid whereas Hield is a natural 2 and can be a secondary ball handler and Valentine can play 1-3. Selden is in a similar position to Keith Langford, but Selden will have a better shot at the NBA because of the way the game has evolved over the past 15 years to smaller players.

Selden is the one underclassman for KU that should go this year because he's the only one whose value has peaked. Diallo hasn't shown enough of a foundation to build off of to assume his potential will be developed in the NBA so his best bet is to stay another year. Fortunately, he's at least gotten enough good advice to not hire an agent and end that possibility.

I agree, Dan and Jim. However, my gut says that Wayne will leave. It is hard for a guard to rise to "lottery" status in a senior year. Not saying that it can't happen, but the lottery picks seem to mostly be the so called potential franchise makers, along with a number of foreign players we often haven't heard a lot about.

Big men take on a different evaluation. While Perry isn't the classic big man, he has improved his NBA stock considerably this year by coming back and developing those skills that he will have to rely on to be an effective pro, i.e. his outside shooting ability and the baby hook shot that is very difficult to defend.

Most of the other underclassmen would be making a huge mistake to leave, in my opinion. The exceptions might be Svi and Brannen. Svi could play pro ball in Europe while waiting his turn at the NBA, and I foresee little opportunity for Brannen to get the kind of playing time that he needs to develop. Frankly, I don't think that Brannen has the mental and physical skills to be a pro. However, if he is going to have even a chance, he will have to transfer, sit out a year but practice, and then have a great senior year somewhere else.

Brannen Greene would get eaten alive in the NBA, he is so immature and doesn't seem like he has the focus or ambition to get better. He throws lazy passes and turns the ball over way too much for the amount of time he plays, he is a terrible defender, he hasn't shown the ability to handle the ball or get to the basket. He came in as a great 3 point shooter and after 3 years that's still all he is, he hasn't improved at anything in my opinion, and that tells me he doesn't have the work ethic.

I think Selden is gone. I'm sure his family is ready to get back to the east coast. His mom said she doesn't like Kansas BBQ...I think they're done with Lawrence...

Sad but true. We have become a nation of free agents.

She doesn't like Kansas BBQ? Someone take her down to Haywards before she leaves.