Senior Ashley Williams gave the Jayhawks the early edge as she pushed the ball past Smith in the second minute.

Williams found the back of the net for the fourth time of the season after junior Tayler Estrada threaded a pass through three UT defenders for the assist. 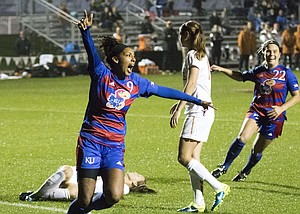 “She put it on a platter,” Williams said. “All I had to do was redirect into the back of the net.”

While the second-minute goal gave the Jayhawks confidence against Smith, it was KU sophomore goalie Maddie Dobyns who stole the show. Dobyns collected six saves as she fended off the Longhorns’ late push to tie it.

“Dobby was huge tonight,” KU coach Mark Francis said. “Earlier in the season, she was a little hesitant coming off her line for some stuff. She’s really improved in that area.”

Kansas (9-8-2 overall and the No. 6 seed in the conference tournament) seized control early, outshooting Texas, 4-1, in the first 30 minutes. After UT’s second shot of the match, Kansas quickly countered and had a golden opportunity to go up 2-0 on the No. 3-seeded Longhorns. Junior forward Ashley Pankey earned a penalty kick for the Jayhawks in the 31st minute when she was fouled in the box. Senior Liana Salazar stepped up to take the PK, but fired it off the right post to keep Kansas’ advantage at 1-0.

KU junior Jackie Georgoulis gave KU some breathing room after she blasted her second career goal past Smith in the 73rd minute. Georgoulis scored after a shot from Hanna Kallmaier deflected off the post and bounced back to her foot.

“I think it’s great for Jackie,” Francis said. “I honestly think she played really well today. She battled and won balls in the air, and that’s what Jackie does.”

Georgoulis’ goal proved to be the game-winner since Texas’ Kayra Dollas answered two minutes later to bring Texas back within one.

The Longhorns had two golden chances to pull even in the final 10 minutes, but Dobyns made a diving save on a header from Lindsey Meyer in the 83rd and a leaping stab at a one-timer from Isabelle Kerr in the 88th.

“Maddie had amazing saves at huge times,” Williams said. “She played fantastic, and you couldn’t have asked for anything more from her.”

Wednesday’s match snapped a five-match winless streak for Kansas. The Jayhawks were 0-4-1 since their last victory on Oct. 11 against Oklahoma at Rock Chalk Park.

Kansas advanced to face No. 2 seed Baylor at 8 p.m. Friday in the semifinals after the Bears defeated TCU 7-6 in penalty kicks after they were tied at 1-1 after double overtime.

No. 1 seed West Virginia and No. 4 seed Texas Tech will square off in the other semifinal match at 5:30 p.m. Friday.

“Baylor is a tough team to play against,” Francis said. “They fight, and they battle, and it’s always a battle against them.”