Former Kansas cornerback JaCorey Shepherd sprints to the finish of a timed 40 yard dash during Pro Day on Wednesday, March 25, 2015. 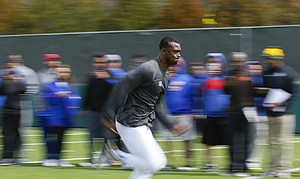 “I’m pretty happy with my results,” said Simmons, who recorded the highest vertical jump (41 inches) and added to it 18 reps of 225 pounds in the bench press, 11 feet in the broad jump and a 40-yard dash time of 4.56 seconds. “I came out here expecting to perform well because I’ve been training hard the past several weeks.”

Wednesday’s pro day, which marked the last official KU event for these athletes, began in the weight room at 10:30 a.m. and wrapped on the practice fields just before 2 p.m. In between, the Jayhawks — along with a dozen or so others from schools nearby, including former Jayhawks Keeston Terry and Jake Heaps — ran through combine-style drills that tested everything from speed and strength to intelligence and agility.

As is the case at most pro days, the majority of the Jayhawks labeled the 40-yard dash as the day’s most important event.

Added wide receiver Tony Pierson, who ran a 4.41 40 and was known as the fastest guy on the team throughout his career: “That’s been my main focus since I started working out, just keep on grinding on that 40 time. I think everybody just feels good about the day, and we’re relieved that we got this opportunity to show what we can do.”

Almost everybody. Shepherd, who along with linebacker Ben Heeney was invited to the NFL combine in Indianapolis in February but sat out of drills because of a hamstring injury, ran the 40 on Wednesday but did not record an official time because the injury affected both of his attempts. Shepherd, whose game film scouts have fallen in love with, has been plagued by the aggravated hamstring since January and was noticeably bothered he was not able to show better on Wednesday.

“It’s disappointing, but I’m not gonna let it get me down,” Shepherd said. “I just have to get myself healthy and go from there. Everything else is up to the man above. He brought me this far, so I just have to keep believing and not get down about something I can’t control.”

Stowers, a defensive lineman who was well on his way to 25 or more reps in the bench press, stopped at 18 after injuring his pectoral muscle mid-lift. Despite the setback, scouts said they remained impressed by Stowers’ film and strength.

Heeney was on hand Wednesday but only ran through positional drills, choosing to let his combine numbers, which were among the best at his position, speak for the themselves.

Of all the Jayhawks, Heeney and Shepherd are the most likely to get drafted, but several of the guys who competed figure to get an opportunity via free agency, and a few could wind up following in the footsteps of former Jayhawks and current Denver Broncos Chris Harris and Steven Johnson, undrafted free agents who made a 53-man roster.

Simmons said performing well in front of so many pro scouts was a great feeling regardless of what the future holds.

“We came out here and were talking about it, just thinking, “Dang, our dreams are within our grasp. We’ve just gotta perform,’” Simmons said. “Me and JaCorey have actually been looking forward to this day since we got here.”

An updated KU roster was made available this week, and it featured a few noteworthy changes. Former quarterback Jordan Darling has been moved to tight end; offensive linemen Damon Martin and Brian Beckmann are no longer listed; Derrick Neal (cornerback) and Darious Crawley (running back) have officially moved back to wide receiver. In addition, KU’s defense no longer features a Buck position, only defensive ends and linebackers. As previously reported, kicker John Duvic and linebacker Colton Goeas also did not appear on the updated roster.

I'm kind of surprised by some of the 40 times. McCay, Harwell, and Sendish never looked as fast as what their times post. If someone told me that Harwell was faster than Pierson I would not have believed them without seeing it. It frustrates me that we didn't have a little better offensive line and quarterback because there was all kinds of speed flying around out there at receiver and RB has always been solid. Some of these numbers are definitely NFL level. Good luck to all these Jayhawks and hopefully they can all get their shot.

There's a big difference between track speed and game speed. Tony Pierson has great game speed and would likely be the fastest if timed in full uniform.

The numbers do look good. I am just curious why Tony is not expected to be drafted? He seemed to have a great football IQ, plus was fast in game situations.

His size and concussion history will be red flags. These days a team may not draft him because of the concussions, but he maybe a 7th round flyer that someone will take a chance on. Otherwise, he will get snapped up quickly when they can sign undrafted players.

If I remember correctly the pro day 40 times are always a bit favorable to the combine times. Call it a home field advantage.

Still don't know why they do these same drills for all positions. A 40 time for a lineman is ridiculous. And why no sled pushing measurement or squats etc.?

This team was a lot talent than we thought...

Competent O-line, and EVERY aspect of the offense improves, as does the time of possession, etc...which of course helps the defense.

D-line ability can color the entire game as well. To be able to someday put consistent pressure on the QB with just the 4 D linemen, makes the rest of your pass coverage have luxurious options, wipe the drool from the D-coord face type of options....

Curious to see how our team starts the season, and develops throughout the season.

Dexter McDonald and Jacorey Shephard amongst my favorite KU players from last season.