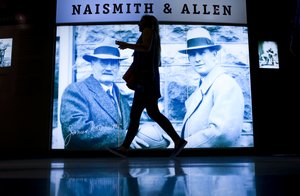 Images from the long-awaited Late Night in the Phog 2014 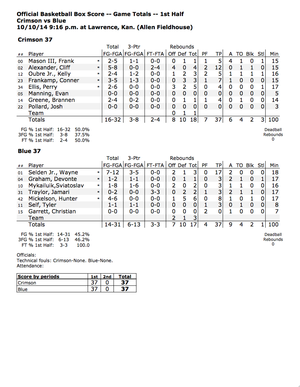 Kansas University men's basketball coach Bill Self provides insight on where he got his Andrew Wiggins outfit, praises KU's freshmen for their play in the team's 37-all scrimmage and shares that sophomore big man Landen Lucas has a minor leg injury that kept him out. Plus, plenty more regarding the ...

Bill Self wore oversized black rimmed glasses, white shirt, black bow tie, black slacks, black shoes and no socks as he addressed his team in a video prior to the men’s basketball portion of Late Night in the Phog in Allen Fieldhouse.

“You have three assignments tonight,” Self told his Jayhawks while writing on a blackboard in his snazzy outfit. “Try hard. Have fun. ... And Andrew set the tone. It’s time for us to look the role of being the best.

“Let’s look good!” Self exclaimed to his troops.

Prophetic he turned out to be as the 2014-15 Jayhawks looked rather flashy during a Late Night “evolution of hip hop dance number” and a 20-minute scrimmage to conclude the festivities before a crowd of 14,000 fans in a building that seats 16,300.

“We went to the thrift shop, and they only had one jacket. We had to make it one-size-fits-two. Basically, we got it together. I’m going to send it back to him,” Self said jokingly of Wiggins.

“That was probably one of the dumbest things I’ve ever done. They (script writers) thought it was funny. It was a pretty identical outfit. He looked better in his, though.”

“It (Self’s suit) was funny. It didn’t cost as much as Andrew’s, though,” sophomore guard Wayne Selden said after scoring 17 points off 7-of-12 shooting (3-of-5 threes) in the Blue Team’s 37-37 tie with the Crimson squad.

Self also had a pair of memorable lines in a video in which he addressed fans from his office.

“We don’t always wear jewelry, but when we do we prefer a ring on each finger. Rock Chalk, my friends,” Self said, wearing his 10 consecutive Big 12 title rings on his fingers and thumbs.

“We don’t always win championships, but when we do we prefer 10 straight,” he added with a foreign accent.

He was impressed with the play of several Jayhawks in the 20-minute scrimmage.

I thought Cliff (Alexander, 12 points, four rebounds) did well. That’s not real ball,” Self said of the sloppy scrimmage. “I thought Devonté (Graham, three points, two assists) looked pretty good. I thought Svi (Mykhailiuk, three points, 1-for-8 shooting) looked great. All he did was just miss shots, but he was aggressive. He hasn’t been that aggressive in practice the whole time. Kelly (Oubre Jr., five points, three rebounds) was good, too. Kelly made three plays in the first two possessions. It wasn’t well played by any stretch. I thought they did fine.”

The Crimson team actually had a chance to break the tie at the end of the scrimmage.

Sophomore Frank Mason drove to the goal for the final shot, then passed far out to the perimeter, the ball deflecting to Self on the sidelines as the clock expired.

“They called ‘4-up’ play. I was telling Perry (Ellis) to wait to do it (set screen up top for Mason). You should wait until 8 (seconds) or so to make sure you get the last shot. Instead, I got the last shot on the pass out of bounds,” Self said with a smile.

Will there be videos up or replays on Watch ESPN of Late Night?

Watched live on Watch ESPN...the coverage blew. Rather than show what was on the big screen during what I assume was a long highlight reel, we watched the fans hold up blue screened phones in the dark. So exciting. Then after waiting through everything, they cut off the coverage after the first play of the scrimmage.

Nice look for Coach. Wait, everything but the pants...

I do wish he would have taken the shot there at the end.

We play those eight. Traylor, Graham , and Lucas struggle to get minutes. Frankamp and Mickelson are first off the bench and 6th and 7th men. But I wouldn't be surprised if Frankamp starts instead of Mason. We wont really know about Graham for 10 games or so. It takes a while to really learn the system.

stress fracture, out of 2 weeks.

Lucas will be the last big off the bench. I hope Mickelson can give quality minutes against the teams with more size.

I love these definitive posts as if HCBS gives out info to certain people before he has even made a decision.

I don't see how Traylor will struggle to get on the floor after playing as many minutes as Perry in some of the games last year and actually playing in place of Perry in crunch time a few games.

Brian you obviously didn't listen to what Self said after the game. As more than a few us have said for over a year, Conner is really a 2 not a point guard which is what Self said after Late Night. At this point I think we need to bank on what the coach says, not what would't surprise you. Listen up.

Dear Coach Self, Please don't ever wear that hideous outfit ever again. Sincerely, My eyeballs.