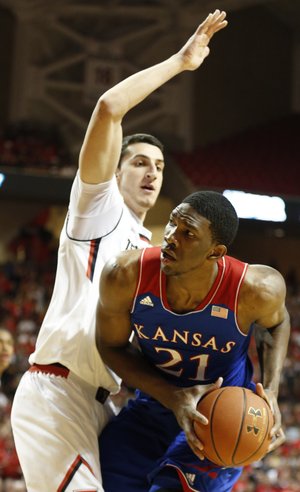 Great Win!! Tech is definitely vastly improved under Smith, and we were indeed lucky to have that 'pass' to Wigs right under the basket with 3 seconds left.
I did see Joel seemed to have some back pain, so let's hope he can keep getting as much rest and treatment as possible for the rest of the season. We really need him feeling strong from here on out.

Now it's time to hook some Horns!!

How is this Tom's fault? He doesn't run the LJW, he just works there.

"We had to figure out a way to limit his touches, make him play both ends of the court."

Wiggs is already the focal point defender, and really has been all year. There are lots of elite players that you can reduce the effectiveness of by making them play D. For Andrew it is just routine.

Hats off to coach Tub & the Riders. They competed hard and almost caused us trouble. Well, the zone is literally a trouble for us night in night out.

After two heartbreakers to ISU and KU. Tubby goes to Stillwater for not-so-Smarts return. So they should get a win!

For all our concern about having six losses so far, this team is still, all things considered, playing really dang well for ranking 349th in total experience and being ranked 8th.

It was Wiggins' switch- offs to the ball handler at the top of the key on Tech's last possession that forced Turner to run the baseline and ultimately be fouled by Embiid. Andrew wasn't going to let anyone drive the lane or make an uncontested jumper from the key. I'm guessing in the next to last timeout Wiggins was either told or asked to defend the shooter, no matter who it might be. Thus, KU's guards switched off their man on the screens and Wiggins stayed with the ball handler. I'm sure it wasn't Coach Self's plan to foul with 12.6 on the clock, even though the kid was a 65% free throw shooter (hardly a guaranteed 2 pts). Turner, to his credit hit both shots and put the pressure back on Kansas. Thankfully, Joel & Andrew combined for the winning play. (Does Joel get an assist or does Kravic?)

I'm not sure if the foul with 12 sec left on the clock was intentional or not, but the way Tec' had been making shots at the end of the clock I felt it was our best chance to get the win. Even if they make both free throws we still have more than enough time to to take the game, which fortunately we did. Just as impressive was JoJo's time and performance on the court, he looked more like his old self, hopefully he will be good for the rest of the season. RCJH

Anyone else watch the replay and notice that Wiggz famed "second jump" had him in the best possible position to tip it in if his layup bounced out!? This kid is a freak athlete who could be elite if he could just figure out how to finish at the rim more consistently!

I'm greedy enough to think he should opt for an off season with Andrea Hudy. Pipe dream, I'm sure, so we have to settle for what we have – which ain't too shabby.