Bill Self: Wesley ‘terrific’ as Wilt 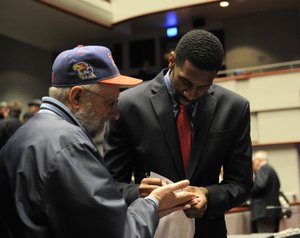 Justin Wesley — the Kansas University basketball player who played Wilt Chamberlain in the movie “Jayhawkers” — signs an autograph for a fan at the movie’s premiere Friday at Lied Center. Story on page 3B.

“I thought my guy did a terrific job. I did. I figured he’d be a natural in that particular role. He was better than even what I thought he’d be,” Self said after attending the movie on Valentine’s Day with his wife, Cindy.

“I loved it. I thought it was great,” Self added of local director Kevin Willmott’s story of KU coach Phog Allen bringing Chamberlain to KU during the still early stages of the civil-rights movement. “It was well done, classy, certainly a great way to spend your evening.

“It reminded me a little of ‘Glory Road’ on a much lesser scale of what young men went through at that time, all the pressures and challenges. I think they did a good job of displaying that,” Self added.

Wesley, who wore a black suit and slacks, blue shirt and red tie to the showing, could not comment on his performance in accordance with NCAA rules.

His mom, Charlene Taylor-Mask, who attended, said: “I am so very proud of Justin, all his achievements on court and off court. I think he should be very good (in acting),” she added. “He acts out a lot with myself and Keith (Langford, brother) and his other brother (Kevin). He generally gets what he wants so he must be pretty good.”

Wesley’s college roommate of three years, Jeff Withey, also attended, as did the members of KU’s current team. Some, like Landen Lucas, wore suitcoat and tie; others went with a more casual look.

“I’m really excited for him,” said Withey, a rookie with the New Orleans Pelicans on All-Star break. “To be able to do a movie and be a college basketball player and student is not easy. It takes a lot of time and effort. I love the guy. He’s like my brother. I’m happy for him, and I’m excited.”

Hey LJW, Please let us know when/where else it will show, or be available via DVD, etc. I'd love to see that show, it sounds like a great concept and probably a great insight to the man and his times.

Yes I'd like to order a dvd too...they're not showing it in Alaska. Justin seems like such a team player and doesn't garner much attention. Good to see him getting his share!!

" Wesley, who wore a black suit and slacks, blue shirt and red tie to the showing, could not comment on his performance in accordance with NCAA rules. "

Why wouldnt he be able to comment on his own performance ??? Another NCAA rule that makes absolutely no sense ....... SMH

Forget DVD. Work with one of the numerous distributors to make this available on digital download. Fimmakers: Message me if you need some contacts to get this film out there.

I did not know Wesley is Keith Langford's brother? Tight.

Won't be able to get to see the movie, unfortunately. Please let us know if/when this will be made available on DVD.