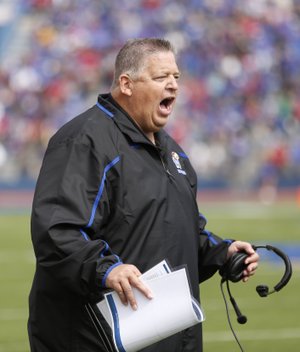 If you can't execute a simple snap, you've got some really big problems.

Yep. Fundamental problems all over the place today after the first quarter.

We will lose the rest of our games by more than 14 points.

I'll take that bet! What a ridiculous comment. One game against a ranked team and the sky is falling.

No the sky isn't falling. This team just doesn't have the talent to compete with teams in the Big 12. Admit it. I totally agree that KU won't be within 14 of anyone here on out. Can Weis and go get someone like Bobby Pertrino. He's a train wreck but he also wins.

No ALBERG, the sky started falling with a poor performance in our first game against a terrible team, SDU. Yeah, I know we beat them 34-14 but the game was much closer than that and that was the first sign. We have not played well in any game and were lucky to beat another terrible team (La Tech). Heaps has almost zero time to throw and we are not blocking well on the run. TT will not be ranked by the end of the year.

I'll take that bet as well!!

KU has a good chance to win five games this year so do not give up with this lose.

I don't understand why, after racing out to a 10-0 lead, we didn't think to hand the rock to James Sims ALL DAY... How does a RB as talented as him get only NINE carries?! That diamond formation is about as dumb as the "Jayhawk" formation. You make it easy for the defense to stack the line of scrimmage and come with basically all-out blitzes when you have 4 guys standing in the backfield right by each other. Just a baffling game in sooooo many ways... In other news Ben Heeney is a FREAK! Love watching him play...

So if you start handing the ball to Sims "ALL DAY" with a 10-0 lead, the box is stacked with 9 or 10 like it was with the ridiculous diamond formation and Sims gets 1.9 yards/carry. Yeah, that's a winning game plan.

This O line has demonstrated that it does not run block well or pass block well. Our best offense will come from the spread and quick passes.

Exactly. The spread is the only way to equalize our poor talent on the O-line with Big 12 defenses. What did we run when Reesing was here? Spread. We didn't have great personnel. We had a gamer at QB and gamers at wideout and a nice change of pace duo at running back.

Combine that with a bend-but-not-break defense and we were respectable.

With the once-in-a-generation GIFT of a schedule break in 2007 coupled with some pretty decent talent, we were able to win the Orange Bowl.

That formation you speak of is how KU was able to gain so many yards on the ground last year. It doesn't work this year because the OLine sucks.

No, I don't uderstand why we went to Cummings with a 10-10 tie when Heaps and the spread had them off balance.....

Should have hired Mike Leach.

You make it sound like KU could have hired anyone it wanted. We are talking about the FBall not the BBall program. Leach was not interested.

Or Fedora right? He looks good at UNC....ha

Why would he after the treatment Mangino got.... Say what you want about his style of coaching but he did lead KU to within a game or two of playing for a national championship and coached them to a BCS bowl game win!! This school is NOT serious about competing at the level of an Alabama or Texas so whats the point?

Weis is worthless. There is nothing about this squad that gives me hope for a brighter tomorrow.

All of the players and coaches talk like if we fix a few minor things we'll be just fine. THIS WAS A 54-16 DRUBBING! There's a total lack of mental toughness and discipline on this team. That's not the players fault but the coaches don't seem to be doing anything about it. More transfer players won't correct the fundamental problem we have.

We got a gift in the La Tech game. Big 12 teams won't hand wins to us. If we go winless the rest of this season we have to look at this year as being every bit as bad as last year. That means we're not seeing improvement and its time to make a change. Especially considering we'll be losing a bunch of key players by the end of next year.

According to the depth chart we are losing 4 players to graduation.

After 17 games (3 and 14), I think it is very clear the the "pile of crap" Weis refers to resides in the head coach's office. More importantly is was a relief to see Pierson walk off. He is an excellent talent and seeing him motionless was a reminder of the work and effort expended and risk these players take for a coach who fails to take blame for the outcome.

I think Sims was recruited by Mangino but you still make a good point. Gill's only recruiting class was very high rated, higher than any of Weis's classes. Gill has become a convenient scapegoat for Weis apologists. Those who claim we need to give Weis more time were probably calling for Gill's ouster after two years. While I think that both Gill and Weis were bad hires, I also believe that football coaches need at least four years to give them a chance to succeed.

Oh and by the way Charlie, some will not be upset if you leave early either if you fail to call for a better game plan. Get off your high horse and put someone up stairs to call the offensive plays to run at the defense. You are doing a HORRIBLE JOB CHARLIE !!! Stop being mister I KNOW IT ALL !!!