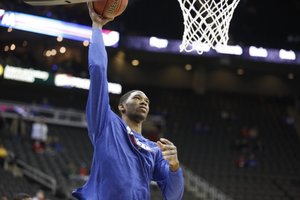 Kansas City, Mo. — Joel Embiid, who averaged 20.2 minutes in Kansas University’s first nine games of the 2013-14 season, figures to see a dramatic increase the rest of the way.

“We need to play him all the time,” KU coach Bill Self said after the 7-foot freshman from Cameroon exploded for a career-high 18 points with six rebounds, four blocks and three steals while working 25 minutes in the Jayhawks’ 80-63 victory over New Mexico on Saturday night in Sprint Center.

“But the more he plays, the less time he’s going to spend in Lawrence. I’m not sure it’s a real wise decision for me to do this, but he’s got to play because he’s got so much talent he’s going to continue to get better and better. He just needs opportunities,” Self added.

Self — he’s started Embiid the past two games — figures to have the big man just one year in Lawrence, with NBA scouts already salivating over the skills he displayed in the second half on Saturday.

Embiid, who picked up his second foul with 10:50 left in the first half, had just two points, three rebounds and one block in seven minutes the initial half as KU led, 39-38, at the break. He erupted for 16 points off 4-of-5 shooting (6-8 from the line) the second half and also had three blocks and three steals.

At one point, Embiid pulled off his version of Hakeem Olajuwon’s “Dream Shake” move, in which he shook one way, then went the other way for a hoop.

“All the time,” said Self, asked how often Embiid resembles Olajuwon in practice. “People haven’t seen in a game what he can do. We’ve seen glimpses but we haven’t seen an offensive repertoire where he can score over both shoulders, (with) both hands or step out and shoot it. That was nice to see.

“He’s becoming a better rim protector too,” Self added. “He gets three steals and four blocks and no turnovers. That’s pretty good for a big. He and Perry (Ellis, 21 points, nine rebounds in 31 minutes) both were great.”

The two again took over after a four-point play by Kendall Williams (24 points) cut KU’s lead to 63-58 at 8:03. Andrew Wiggins (11 points, 3-11 shooting) committed his fourth foul on that three make by Williams and did not return the rest of the game.

“I was frustrated,” Embiid said of his feelings after playing sparingly the first half because of foul woes. “I wanted it bad. I wanted to play. They (teammates) threw me the ball.

“We knew we had to get ready in the second half and play better,” Embiid added. “We had a little run and blew the game away.”

Of Embiid, Ellis, who hit nine of 14 shots, said: “Joel has great moves. The key is to get the ball into him. It opens everything up. We have to continue getting him the ball.”

KU, which improved to 7-3, compared to New Mexico’s 7-2 mark, played awfully hard in an attempt to shake a slump that included three losses in four games.

“I felt like I knew we had to hit them first and had to go at them first and defend and be first on the floor,” freshman guard Wayne Selden said after scoring 10 points with four rebounds, three assists and two steals in 34 minutes. “That was our main goal, to try and be the first one on the floor and be aggressive.”

The Jayhawks prevailed before 18,493 fans in their home away from home.

“It definitely felt like a home court and we were saying it looked and felt a lot like the United Center,” Selden said. “The home support was great.”

Next up, KU will meet Georgetown at 11 a.m., Saturday, in Allen Fieldhouse.

That looked a little more like the Kansas I know and love! And I thought it was a nice touch to add a Jayhawk logo to center court. Kansas City belongs to us, not Missouri!

Glad to see the Sprint Center finally add that. It's a Jayhawks crowd for a Jayhawks game. Nice touch.

What a game! It's wasn't perfect, but it was a solid win. Now it's time to dust the cobwebs off the rims at Allen Fieldhouse, these guys are finally coming home!

Was one of Tharpe's TO's the pass that bounced off Greene's body when he wasn't paying attention? Brannen has definitely improved his understanding of the O & D, but there are still a few WTF moments. Another one was when Perry floated near the corner on a break instead of attacking the hoop, in which case he would have received a perfect pass that instead went to the cheerleaders.

On a more positive note, it was nice to see Jamarii use his athleticism to attack the hoop against the zone on at least a couple occasions. That seemed to be lacking to much from the other bigs, though that may still be a bit of hangover still from the FU game.

BREAKING NEWS: Perry Ellis was seen at the game cracking a smile!

guys, I have to say, I think maybe landon lucas can be a very nice fill in when he comes in he is always giving something positive, great hustle, attacks the rim for rebounds, looks like a sweet physical player, built pretty nice, does a lot of little things would be a good back up for perry and joel, him and mr traylor black is just a foul lookin for a place to happen, but we already knew that from what was told before he got here. good physical specimen but don't do us any good if he can't stay on the floor.. overall better ball game, could be a combination of things, we were at our home away from home, a solid week of practice, our players better focus, I thought tharpe played better, brennan played well, joel OMG enjoy him while we have him lol. now on to Georgetown, keep up the good work guys . GO HAWKS

I have been on the Lucas bandwagon all year. He doesn't seem to make stupid mistakes and always plays hard and smart. I have been impressed with him. In a game like that where all the bigs are in foul trouble it is nice to see that he can come in and not be a train wreck (Wesley). I would play him over Black all day.

Tharp was a LOT better this game. He made some great passes and some nice outside shots, as well. I thought Landon Lucas was pretty darned good when he was in there. Great hustle! Embiid was awesome! That move he made under the basket - the "Dream Shake" - was amazing. It was great to see Brannen Greene make some key shots. Perry Ellis was terrific. Loved the hustle and rebounding by everyone. Once Wiggins figures out how to insert himself into the flow on offense, we'll be even better. I think I saw a lot more "team" in this game - guys supporting each other on the court and from the bench. This game gives me hope that there will be more ups than downs going forward. This was fun!

Brannen Greene had an EXCELLENT game last night. I have ridden him hard but last night he did what I wanted to see from him. He took shots when the situation called for it. He was a functioning part of the machine, doing his job without hesitation. I loved it. He also did BETTER on defense although he still got driven past a few times. Everyone on the perimeter seemed to have a hard time keeping Williams in front of them so I can't fault him for that.

He had a nice steal, a nice rebound and he played in the flow of the game without looking too hyped up or too cautious. He is headed the right direction.

On to Embiid. Just sit back and imagine what his stat line would have looked like if he didn't pick up a boneheaded foul less than 30 seconds into the game. He has GOT to figure out a way how to avoid dumb fouls like this. He lost virtually his entire first half because of that one dumb foul.

And it was nice to see Self make the adjustment to double Bairstow on the post in the 2nd half. That led to a number of easy transition buckets. Those two worthless guards, Greenwood and Neal, did not need to be guarded at all so it was wise to ignore them and drop down to double the bigs. Nice adjustment by Self and staff.

Greene did much better but still has a ways to go. The official scorers gave Tharpe the TO for the play where Greene was not looking for the pass. Tharpe made a "look away" pass at the right time with Selden and Traylor setting great screens and Lucas coming open for an easy 2. He had several other gaffs but overall he played more comfortable and in the flow of the game with the team.

That was on Tharpe. He had at least two "no look" passes where he looked away long enough that his teammates stopped looking for the pass. The other was to Ellis. Tharpe fakes as if he was cycling the other way and Greene correctly began to turn to run the baseline to the other side. A no look pass is only a good idea if you are sure that your teammate isn't going to be leaving his spot. 100% on Tharpe. He didn't consider the implications of his actions when he fakes to go the other way.

If you look over the game scoring you will see it shows 0 TOs for Greene. Tharpe is always doing no look passes and is his MO. Of the 9 dimes Tharpe had, six of them were "no looks," The lob dunk to Embiid he was looking to the wing, the bounch pass in the lane to Ellis when he did a complete spin look away. Ellis needs to be alert on that play because the lane to the basket was open, although Self's apparent initial reaction was that it was on Tharpe.

Waiting to hear from all the nervous -nellies that were proclaiming that the sky was falling last week to chime in and say that maybe they were a tad pre-mature in their bashing of this team. You know who you are.

I wouldn't say we're out of the woods yet. We never actually controlled that game until the last 4 or 5 minutes.

Very much agree, Lance. My point was just to point out the absurdity of some of commentors that wanted us to believe this is the worst team we have ever seen at KU. I only ask that we give a team which is primarily composed of Freshman a little bit of time to congeal and get their act together. If you believe the stats on kenpom.com, this year's team has faced the 12th hardest schedule of any team in Division 1. Maybe they have had a very tough schedule and need a little time and they will do fine.

And they have BY FAR had the toughest schedule of any top 25 team. The only teams playing tougher schedules are the junk teams taking the pay days to get whipped on the road.