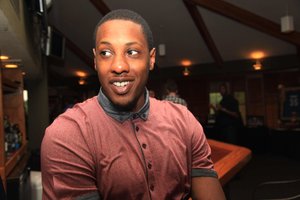 “Miami’s been crazy. This is my first time out of Miami since we won,” said Chalmers, who joined guests at a benefit mixer/auction at Alvamar Golf Club in Lawrence on Thursday. “The atmosphere is a little bit different. In Miami, everybody’s all about Miami. You go anywhere, they’re there cheering.”

Chalmers — his Miami Heat clinched the NBA title with a 121-106 victory over the Oklahoma City Thunder on June 21 — took time away from the celebration to make it back to his college town this week, as today he’s hosting the National Championship Golf Classic at Alvamar.

“This event means a lot to me,” Chalmers said. “It’s the first kickoff to my foundation — the first event we did to help raise money for it. It’s always going to be a special event.”

Chalmers, who averaged 9.8 points and 3.5 assists last year, is enjoying the spotlight that comes with winning a title.

“It’s been fun. Everywhere I go, I’m recognized as, ‘Hey, there goes a champ,’” Chalmers said. “That’s never a bad thing to be called a champ. I look forward to that and interacting with people.”

So which title — NBA or college — was more satisfying?

“It might be the college one, just because that’s the one ... I hit the shot. I had a big moment in that game,” Chalmers said. “But the NBA one is at the top, too, because that’s winning at the highest level, competing against the best of the best.”

Chalmers said he wasn’t sure yet when he’ll get his NBA championship ring, but he already has plans for it.

One of the ways Chalmers stayed focused late in the season was by refusing to watch ESPN’s SportsCenter.

“It wasn’t tough. It was just something that I felt like would ease my mind and keep me at ease for the whole playoffs,” Chalmers said. “It worked.”

Taylor was 9-for-18 from the floor, 1-for-2 from three and 4-for-7 from the free-throw line in 31 minutes. He also added five assists to go with three turnovers, two rebounds and a steal.

Former KU center Cole Aldrich did not play for Oklahoma City because of a coach’s decision (rest).

Mario is an amazing person and player.

Cole gets a DNP in summer league?

Management is trying to humiliate him into a pay cut. Hang in Cole. Believe. Get their money. Its a business now.

Mario is certainly living the dream right now. Good for him. Great to see he is giving back and hansn't forgot his alma mater just yet.

TT - will see you in Brooklyn this fall at the new arena. Can't wait.

Tyshawn is going to make a lot of GM's feel sick for passing him over. I watched the draft in disbelief as team after team selected other, much less talented guards. It makes one wonder what these scouts do with their time. One thing is certain, they are not watching a lot of college basketball games.

I don't necessarily disagree with you. As a KU fan, it sucked watching him sit there knowing that he's as good or better than any of the combo-guards taken before him. But looking at it through the eyes of a GM, I probably would've considered passing on him too if I needed a PG to build my franchise around.

Look at the Nets. They aren't building the franchise around TT. They're hoping he can hone his skills enough to be a decent backup at the PG and/or SG spot. When asked what they liked about TT, they mentioned his desicion-making ability. Are you kidding me? Even as a biased KU fan I know that his desicion-making is probably the weakest part of his game. They just said that because it sounded good. In reality, TT is going to have to work his butt off to see the court at all, and he'll probably go back-and-forth between the D-League and NBA for a season or two before he finds the right role for him.

I would say the scouts did their job. The jury is out - TT makes bad decisions with the ball (and off the court) sometimes. He's still got to prove that he can have more assists than turnovers in any given game. That's why he dropped so far.

I thought his decision making was outstanding the second half of the season. It was as if things finally clicked for him.

I think we see the mistakes and turnovers and they are amplified because of our Jayhawk fanaticism which hangs on every pass and every possession. However, we don't pay as much attention for the good decisions he does make and they tend to go unnoticed or we take them for granted. Scouts don't always see things as a fan sees them. Again, Tyshawn played a lot of minutes and a pattern emerged when some of his most glaring mistakes were late in games when fatigue may have been a factor. The one thing Tyshawn can't do is become tentative and afraid to make mistakes. He has to have his "go" on every time he gets his chance. That's Tyshawn. Bill Self understood that and try to make it clear on many occasions.

I know we love TT and all, but it's understandable why he was not selected until late. I mean, consider the 1st round level guards we've had at KU: Kirk Hinrich, Jacque Vaughn, Mario Chalmers. It's clear you wouldn't start TT over any of them. That said, if he learns to play off the bench, he'll have a long career in the league.

Mario was a second rounder. Considering Jacque never averaged more than 6 points in the league, I might start TT over him. But I agree, TT will be on the bench for a while. Unless D-Will gets injured.

Mario, don't forget your 3 Big 12 rings. Heck, before it is over you might wear sandles and deck all 20 or your digits with championship rings. I assume that you earn them for NBA division titles? You might gleam and glitter more than the colorful tatoos and hairdo of Dennis Rodman!

Oops! sandals; and "of your digits"

And Mario was also a two-time state champion in Alaska. I wonder how many other players can claim high school, NCAA and NBA championships?

Mario is a winner both on and off the basketball court and a great ambassador for the University of Kansas.

Now all he needs is an Olympic Gold!

If Perry Ellis should elect to spend 4 seasons in crimson and blue, just imagine how many championships he might tally before NBA opportunity! He has arrived with 4 large class Kansas state titles and MVP credentials. Now he needs 4 Jayhawk league titles...and whatever postseason gravy Bill Self and Co. can ladle before the pros offer lottery monies.

And, someday Mario's number will be in the AFH rafters. No doubt there are others who disagree, but I know for a fact that a lot of fans are aligned with my thinking.

Okay, so how many Jayhawks have NBA rings now?