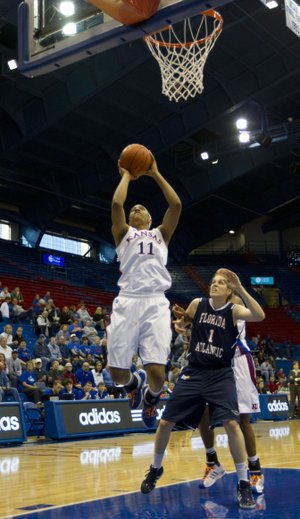 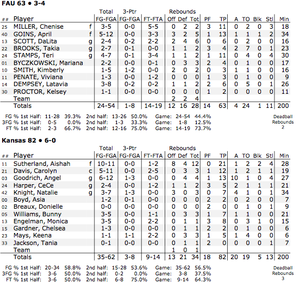 The Jayhawks’ floor general and captain didn’t know she would soon be introduced and brought back onto the Allen Fieldhouse floor, too, as the classic’s MVP following her 13-point, 10-assist showing against the Owls (3-4) that clinched the Classic championship for KU.

“It means a lot,” Goodrich said of the award. “Personally, I was shocked, because at first I thought they just gave an all-tournament team.”

In a game in which Sutherland dominated the glass and cleaned up eight offensive rebounds on her way to 21 points and 12 boards, Goodrich stood out as well by making plays on both ends of the floor. Not only did her pace and play-making help KU (6-0) shoot 56 percent (35-for-62), but she managed four steals and four defensive rebounds while helping keep the FAU starting backcourt in check.

Kansas coach Bonnie Henrickson said she was thrilled for Goodrich, a 5-foot-4 junior, because Goodrich is exuding confidence, aggressiveness and leadership.

The coach said the two of them had a discussion this past spring in which Goodrich told Henrickson she wanted to take control of the team as a junior. Goodrich said she feels like she has come a long way since her freshman and sophomore seasons, when she had to deal with injuries and didn’t feel as though she was in a position to speak up and lead Kansas.

“This year, being one of the oldest veterans and seeing we had five freshmen coming in,” Goodrich said, “I wanted to be the one to step up and be a more vocal leader.”

Henrickson was pleased one of her other captains, Davis, was able to play in all three KU victories at the Classic despite still not being totally recovered from a stress fracture in her right foot. The 6-foot-3 forward only played four second-half minutes against FAU, but finished with 12 points, three rebounds and a pair of blocks, despite the fact she hasn’t practiced the past few weeks due to her injury.

That led Henrickson to joke players will soon be advocating for no one practicing: “Why do we have practice, coach? Look at Carolyn.”

The coach said Davis has much less pain in her foot now and is actually frustrated by not being able to practice because it impacts her timing on the court.

At 7 p.m. Thursday, the Jayhawks will play host to SMU.

Some Thoughts: -Today was the first time in a long time that Monica has not started. Coach called her out after the last game for not playing hard enough. CeCe played ok for her first start. Definitely more competition this year.

-Aishah dominated today against a small FAU team. She definitely has the potential to be All-Big XII but always seems to fade in January. Hopefully she doesn't burn out this year. Most athletic player on the team... beautiful jump shot when she is hitting.

-Angel won MVP. Exciting the see for a player who has torn two ACL's in her career. People forget she was the best recruit ever signed by Bonnie. We are finally starting to see her fully live up to that billing. Her defensive intensity is great this year. She also keeps the pace up on offense.

-A more balanced attack has kept Carolyn's point totals down so far this year but its always nice to have a great center. Expect her to dominate a few games this year. She has the ability to win games single handedly.

-Freshmen Natalie Knight and Bunny Williams continue to impress with solid play and will provide much needed depth the rest of the way.

Thanks for the update. I'll have to take your word for it for now, but I'll get to a few games this year and see for myself.

I just hope these ladies make the tournament so I can fill out two brackets come March.

I'm still skeptical of this team being able to win in January and February because KU has had some pretty good teams in the last few years that have had great non-conference records as well only to fall flat on their face in Big 12 play.

6-0. Great start ladies. I like this team's chances if Angel stays healthy.