“We really needed a result tonight, but maybe the effort tonight will get us some results in the future,” KU coach Ray Bechard said. “I thought we were the better team for half of the night, and then game five is a toss-up, and that is when you really have to produce.” 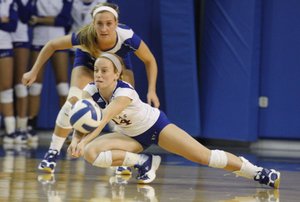 Senior outside hitter Allison Mayfield became the Jayhawks’ all-time attempts leader. She also led the team with 17 kills, a pair of service aces and two blocks. She trailed only Longhorn sophomore Bailey Webster for the floor’s scoring leader as she racked up 20 points for the Jayhawks.

Freshman Sara McClinton also provided a powerful effort from the outside, cranking out a career-high 15 kills while rejecting three Longhorn attempts.

Third-year sophomore middle blocker Caroline Jarmoc had six blocks. She also landed a critical ace and knocked down 11 kills on just 22 swings to lead her team with a .364 attack percentage.

On the other side of the net, last week’s Big 12 Rookie and Freshman of the Week, Khat Bell, left the match in the second set following an injury.

Please fire this coach. His conference record is terrible year after year. I feel sorry for Mayfield. She's a good player.