The Nebraska catcher shows the ball after blocking Kansas baserunner Sara Ramirez from the plate during the game Wednesday, April 14, 2010, at Arrocha Ballpark. Ramirez was called out on the play. The Jayhawks lost 2-0 to the 'Huskers and fell to 1-8 in Big 12 Conference play.

The KU softball team dropped another conference game Wednesday against Nebraska. The Jayhawks are now 1-8 in Big 12 play. 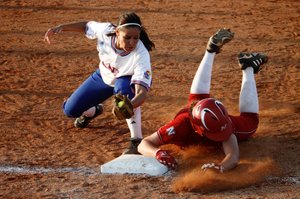 Pictures from the Jayhawks' game against the Cornhuskers April 14, 2010.

The Jayhawks placed 11 runners on base, stranded every last one of them, and Nebraska, despite being out-hit, posted a 2-0 Big 12 Conference softball victory at Arrocha Ballpark.

The Jayhawks left the bases loaded in the first, two on in both the second and fourth frames and at least one in every inning.

“It’s definitely up there in terms of frustrating games,” said freshman outfielder Maggie Hull, who collected a third of the Jayhawks’ nine safeties. “It seems like we fix one thing, and it’s the next thing.”

On an evening when KU played flawless defense and its Big 12 Conference-worst pitching staff held the Cornhuskers in check, the Jayhawks were zero-for-clutch situations.

“At least our defense played well,” Smith said, “and our pitchers did a good job. I have to look at the positives, and our freshmen are playing well, and that bodes well for the future.”

First-year players accounted for seven of the Jayhawks’ nine safeties. However, eight were singles. NU had seven hits.

The lone extra-base hit was a double by senior second baseman Sara Ramirez, who later was thrown out trying to score on a Rosie Hull single in the fourth.

Ramirez was the only runner the Jayhawks lost on the bases, though. The remainder were stranded by ineffectual KU hitters.

The Jayhawks were scheduled to depart at 8 a.m. today for Omaha, Neb., and a late afternoon twinbill with Creighton.

“Hopefully, we’ll come out tomorrow and get some hits and score some runs this time,” Smith said.

So much for living up to those early expectations. This team is in a major funk.