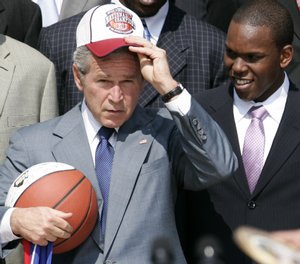 What is the most significant honor for the Kansas Jayhawks' national championship basketball team?

Washington — Question his policies or debate his legacy all you want. At least give President Bush props for this: He knows his Jayhawks.

Or at least his speech writers do.

During a brief ceremony Tuesday at the Rose Garden, Bush honored the 2008 men's basketball national champions.

"I just wish Big Jay and Baby Jay could have come with you. Barney was looking forward to meeting them," Bush joked about the presidential pooch, who, coincidentally, had just, uh, relieved himself within sight of the Rose Garden before the Jayhawks took the stage.

The KU fight song preceded the president's address, and the Rock Chalk chant followed it.

In the intervening eight minutes, Bush gave a brief recap of the season and congratulated the Jayhawks on their season.

"When KU fans come to the Rose Garden, they don't come to admire the flowers," Bush said. "They come to wave the wheat. :

"I just want to congratulate this team. You brought new glory to one of our nation's most storied basketball programs, and you gave your fans all across America one more reason to chant, 'Rock Chalk Jayhawk.'"

Though it's tradition for champions of all stripes - from World Series and Super Bowl champions on down - to make the journey to the White House, Bush insisted the Jayhawks' visit was exceptional.

Included in his recap, Bush mentioned the Jayhawks' victory over his alma mater, Yale.

"I don't know how you did it," he joked, "but nevertheless it was a great victory."

Bush mentioned the Jayhawks' 20-game win streak to open the season, their Big 12 championship and their run through the NCAA field, capped by a thrilling championship game victory against Memphis that gave KU its first national title since 1988.

"This championship team gave America an unforgettable show," he said. "It really did."

Bush made special mention of Danny Manning, who led the Jayhawks to the 1988 title and who served as an assistant coach on this year's team.

Jayhawks at the White House

The 2008 national championship Jayhawks went to Washington, D.C. to be honored by President Bush.

"Most of the players on this team have little or no memory of the last time KU won a national title, which would have been 1988," Bush said. "As a matter of fact, most of the players weren't even born yet. That 1988 team became known as Danny and the Miracles.

"Danny Manning," Bush added, turning to the Jayhawks gathered behind him, "welcome back to the White House."

KU fan in the crowd

After wishing the Jayhawks good luck for next season, Bush was presented with a National Championship cap, a KU jersey and an autographed basketball, which he promptly bounced.

Among the spectators on hand was Adam Sterling, a 1977 Lawrence High School graduate who strolled over from his job in the Foreign Services Office at the Department of State.

Sterling was traveling with the president during parts of the NCAA Tournament.

Bush, in Europe for a NATO summit, met with Russian President Vladimir Putin in Sochi, Russia.

Sterling, whose mother still lives in Lawrence, was frantic to find a televised feed of the Jayhawks' national semifinal game against North Carolina. Sterling explained that in most capital cities, the Marine Corps guard has easy access to American sporting events, but off the beaten path in Sochi, there was no access.

But Sterling found a live Web cast, which he gladly watched, despite the early hours.

When he heard the Jayhawks would visit the White House, he had a much easier time catching the action.

"But I had to keep checking the (ljworld.com) Web site to find out when they'd be here," he said. "They don't do a lot to keep the staff informed here."

Sterling's take on the president's address?

"He was certainly well-briefed," Sterling said.

I'm gonna give Bush the benefit of the doubt here. The guy is an avid sports fan and he's from Texas, who's major schools belong in the Big 12. I think Bush knows how people think about KU. It wouldn't surprise me in the least if he watched a few of their high caliber games......like Yale. hehe :-)Honestly, seeing the picture with Bush holding up a KU jersey with Self on the right of him and Russell on the left just makes me smile. Damn this team was good. Unbelievable talent and they deserved to win it all, regardless of how the final game was won. We have one more championship to win......go Paul Pierce! This year is already magical with the KU football and basketball teams.......mind as well put the icing on the cake and let another Jayhawk win it all. GO CELTICS!!!

God I am so sick of people constanly nagging on bush. You just wait and see if Obama gets elected then we are in even worse trouble he is a much bigger liar then bush.

All presidents have speechwriters. Why does Mr. Hartsock seem to feel that fact makes the president's words any less effacacious or sincere?

bigjay, I think the reason he copied and pasted it instead of retyping it was to make sure he preserved its valuable spelling and grammatical errors.

tis4tim:Because this president is a d-bag, man, and generally regarded as a liar by those of us that don't work for Fox News.

SHUT UP WITH THE POLITICS, JESUS!Go to cspan.org, msnbc.com, cnn.com,..."somewhere" other than here if you wanna spew that crap! If you hate the man, fine. But respect the fact that it was an honor for the Jayhawks to be recognized by the President of the United States. Either way, venting your political frustrations on a sports site is nothing short of preposterous.This is enough to make a preacher cuss...

Speakeasy- Samual Johnson. Good quote.flipborder02-That comment was so eloquent and well thought out that you just had to copy and paste it to the other article instead of actually thinking of something else to say, huh? I know, I know, thinking makes your head hurt. .....So, you have that beer with Bush yet? I understand that's a good reason to vote for someone....

Yes, calming down would be the thing to do. I for one am not sorry that I'm looking at a larger picture than sports.

Well, it IS generally true that every word that comes out of Bush's mouth is a lie.Except where it concerns the Jayhawks. ; D Although he WAS probably lying about Barney wanting to meet Big Jay and Baby Jay. By the way, if he's still looking for those WMD's, he could have spotted them in the Final Four wearing crimson and blue and destroying Carolina and Memphis.

Bush's epitaph will read, "Patriotism is the last refuge of a soundrel."

jross sounds like a fun guy. Can we still bash Mizzou and Roy?

Yahweh,Well, that's one explanation, I suppose. But, if he's generally regarded as a liar, as you state, then are we to dismiss all his praise for our beloved Jayhawks as still more lies?

What a poorly written article. Hartsock can take his place with the rest of the incompetent "journalists" at the LJW. The remark about the dog relieving itself is rather too much information. I hope the dog dropped its load on Hartsock's shoe.

To me, the part about the presidential pooch pooping was the best part of the story. The only thing that would have made it better is if he had pooped on Bush's shoe.

Man, chill. We're just having some fun. Kind of the way Bush was when he pretended to look under his desk for WMD's.

Bush knows more about the Hawks than he does about Iraq.

Speakeasy - What's a soundrel? Here's an apropos quote/proverb:"He who lives in a glass house shouldn't throw stones at others."

Touche. But the correct wording is, "People who live in glass houses shouldn't throw stones."

Bush rules you Hippies. I can't wait till gas is $7 bucks a gallon and all you hippies are crying about it but, you still have your lovely views off the gulf coast. Wait isn't this a sports web site isn't it????please stop you all are acting like abunch of hippies I don't think any jayhawks are hippes they are champs. So please drop it. Lets write about the Jayhawks here not Bash Bush or any body else save that for CNN & Fox. LAMO

The correct POSITION is take your politics and go. I've seen you come on here and breathe fire about punctuation and article content as if you are applying for the editorship of the LJW (and I don't know or care if that isn't a word). The fact is you rarely, if ever, seen to offer anything of substance on Kansas basketball (this is a hoops thread if you haven't noticed). There are other venues/forums to vent your political frustrations and, seeing as how you are confused about where to look for those, post again if you need directions. ILL GLADLY POINT YOU IN THE RIGHT DIRECTION.(Did you notice the missing apostrophe?)