Kansas University freshman Travis Young, Garden City, winces as his friend Kim Nguyen, also a Garden City freshman, pulls a KU hat down on his head Wednesday at Jayhawk Bookstore. Through the end of June, KU had received $626,000 in royalties from sales of licensed merchandise connected with KU's national basketball championship, a record haul for such a title. 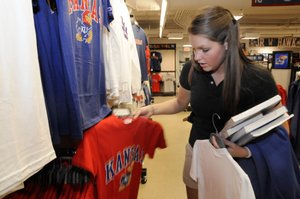 Kansas University sophomore Amanda Garley, of Whitefish Bay, Wis., shops for Jayhawk merchandise on Wednesday at the KU Bookstore in the Kansas Union.

Now that KU already has reaped a college-record amount of money from royalties paid on licensed products touting a national basketball championship, KU students assess their chances of breaking the record at the end of this season. Hint: That would mean winning another NCAA title.

KU might be feeling strains from the state budget, but it has been making considerable money from the sale of official T-shirts and other merchandise.

Kansas has beaten North Carolina again, this time when it comes to proceeds from sales of officially licensed merchandise.

Sales of T-shirts, flags, mousepads and all other items connected to the 2008 national basketball championship generated $626,000 in licensing royalties for the Jayhawks through the end of June, topping the previous championship record set by North Carolina in 2005.

Some would say it's fitting. The 2007-2008 Jayhawks raced to a 40-12 lead in eliminating Roy Williams' Heels in the national basketball semifinals, 84-66, before topping Memphis in overtime for the NCAA Championship.

Collegiate Licensing Co. reported this week that the Jayhawks were unmatched in cashing in on a men's hoops title. The Atlanta-based company represents nearly 200 colleges, universities and related operations, and never before has any client soared to such financial heights from a men's basketball championship.

"It's good to beat Carolina, and everybody else - all the other national champions," said Jim Marchiony, an associate athletics director at KU. "That says something for the passion of our fans. We're happy about that."

Another reason for the crimson-and-blue crowd to be pleased: In all, Kansas Athletics Inc. received $2.55 million in royalties from sales of licensed items in 2007-2008, a full $1.55 million more than the department had budgeted, Marchiony said.

Of the royalty revenues, about $700,000 will go toward KU's overall scholarship programs, benefiting students across campus, he said. The remainder will be used to help finance athletics scholarships, an expense that already has consumed $7 million for this coming academic year.

KU also recorded the biggest year-over-year improvement in royalties revenues -110 percent - among Collegiate Licensing clients. The Jayhawks, with $2.55 million in revenue, ranked No. 14 on the company's list of top 75 universities, up from No. 22 a year ago.

Then Bill Self's hoopsters won a Big 12 championship and, in San Antonio, emerged victorious from a Final Four field fortified by all four No. 1 seeds.

"Our percentage went up more than anyone's," Marchiony said. "Obviously, those two factors made a huge difference in that number. :

I'm not quite sure, but I think this is something I can be proud of. Yeah, that's it, I'm proud of our licencing title! Damn proud.

Anytime we beat Carolina is a good thing...

I wonder how many of those KU Shirts are currently being worn by Duke fans just to taunt the TarHeel fans?

Man... This sure does make me feel even more sorry for the university. Losing out on profits to Joe-College and all...

I want some more stuff.

I know they got my money.

I'm wondering how much Jayhawk merchandise is in Roy Williams closet? :D

yesterday's news...ps: perkins really needs to worry about a "little" joe-college, huh? what a tool...this is going right to his pockets. i can't stand that guy...

5Decade,That's a mizzboo move. They're the only ones with so little success and lack of pride that they think that move actually has an effect (it just points out the lack of productivity from their own program). Duke fans know it would make them look stupid (especially considering KU is one of the winningest teams in history).Comparing Duke to mizzery is the only time I will say this: Duke fans have more class than that. Wow. I think I threw up a little..........

Lew has more than doubled our athletic budget since he's been here.AndIs building new awesome facilities for many different sports.AndHas done everything necessary to help our coaches win an Orange Bowl and a National Championship.What's not to like?I can't stand people who say they don't like him with absolutely no justification for their opinion. To me he seems like a nice enough guy with good business sense.

People still don't like Lew because he took their ice away.

There's no doubt that there are more tar heel fans nationally than KU fans (in basketball). What helped put us over the top is that the football team also had a great season in the same year.

mushhawk: according to previous articles, sales from franchised merchandise goes to athletic scholarships, not to the AD's pocket.

With all these sales and the next basketball season soon to be upon us, and more sales, maybe, KU will become "Americas" team. Already accused of being ESPN's favorite team, why not the USA.

The Joe College lawsuit wasn't nearly as much about the revenue as it was about KU protecting our image. It started years ago when they surveyed what were the defining images/colors/etc. for KU. It is completely appropriate, regardless of the $, but $ will follow a good image.

Here's to Lew. He seems to be pushing all the right buttons. Let's all try to remember that is is football season. Basketball will have its time. Its almost game week.

Kind of a wild statement about all this $$ "going into Lew's pocket..." Come on. Conspiracy theory? Show us some proof. You want to debate something or convince some of us, show us proof. You just want to make a statement, well you did that. Anyone can do that. I personally think Lew and Self and Mangino are worth the $$ they make, so I find it kind of ridiculous to bash any of them after such a fantastic year. Looks actually like Self will have to earn every penny with this new, young, unproven team...No more "CJ Giles"-type offcourt sagas. I do not envy Self at all, but am really curious to see him work his magic.