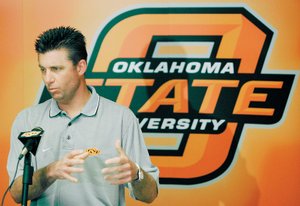 Stillwater, Okla. — Even during Oklahoma State's off week, quarterback Zac Robinson was focused on a championship. Only this one was the World Series.

With his Cowboys getting their only Saturday off during football season, Robinson flew home to Colorado to watch the Rockies play the Boston Red Sox in Game 3 of baseball's fall classic.

"It was fun to get out of Oklahoma and just go back home and just kind of hang out with my family and go to the game. It was definitely a fun weekend," Robinson said.

Tied with No. 5 Oklahoma (7-1, 3-1) for the South Division lead, Oklahoma State will need its first win against Texas in a decade to keep the Longhorns from catching up in the standings.

Coach Mike Gundy said the Cowboys spent one of their practice sessions last week focusing on fundamentals and another getting an early start on preparations for the Longhorns. Other than that session and a full practice Monday, when the Cowboys would normally hold a walkthrough after a game two days earlier, he didn't see any real advantages from having the off week.

In fact, it creates some concern.

"The only issue with having an open week is when they leave you for three or four days and if they go back or they get out of the routine that they're in," Gundy said. "As coaches, we have to make sure that we get them started today at practice and get back on track."

When last they played, the Cowboys capped a 41-39 win against Kansas State with a last-minute drive that resulted in the game-winning field goal. After a disappointing loss at Troy, the Cowboys won four of their last five games heading into the break.

The Cowboys hope to be a bit healthier than when they last left the field. Jeremy Nethon and Patrick Lavine left the Kansas State game due to injuries, joining Chris Collins in a linebacking corps that's been riddled with injuries. The timing couldn't be worse with Jamaal Charles, the conference's leading rusher with 1,012 yards and 11 touchdowns, coming to town.