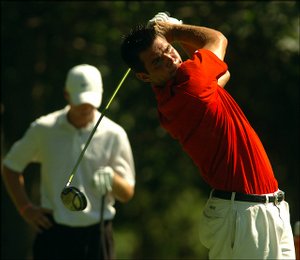 Kansas University golfer Gary Woodland tees off during a U.S. Amateur sectional qualifier. Woodland qualified for the U.S. Amateur on Monday afternoon at Alvamar Golf and Country Club when he edged KU teammate Pete Krsnich in a playoff.

Maybe the bet was a beer, or dinner at a fast-food restaurant, or perhaps the two Kansas University golfers' previous encounters were just for pride.

But Monday afternoon, the stakes were certainly higher when the KU duo locked up in a sudden-death playoff, with the winner claiming a trip to the U.S. Amateur Championship on August 22-28 at Merion Golf Club in Ardmore, Pa.

"It's definitely a no-win situation for me," said KU coach Ross Randall, who was in a small gallery watching the two players march to the playoff hole at the end of a 58-player sectional qualifier that had started nearly 11 hours earlier.

When Krsnich missed his 10-foot putt for par on hole No. 1, Woodland closed the door by sinking a seven-footer for victory.

"It's definitely a great feeling," said a smiling Woodland, who along with Krsnich fired a 3-over-par 145 for the day's first 36 holes - 18 on Alvamar's private side and 18 on the public course.

"But at the same time, you never want to have to win this way - beating a good friend."

Nonetheless, when Woodland's putt dropped, Krsnich was left for the third time in his seven years of amateur qualifying as an alternate hoping a spot would open up.

"In a way I felt like I kind of gave it away," said Krsnich, who after shooting 71 on the private side during the morning session hit only four greens during his afternoon round.

"But at the same time, when you're able to go up and down and still make par like he did on that last hole, you just have to hand it to him." 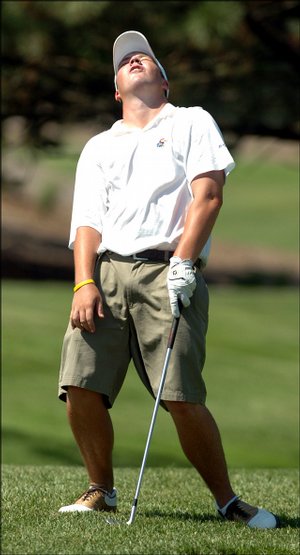 KU golfer Joey Mundy bemoans a missed putt on the No. 9 hole.

Monday, Missouri University's Chris Mabry finally found his own handle on the Jayhawks.

"Yeah, it's about time that I won one here," said Mabry, who just a week ago watched Woodland sink a five-foot putt to prevent Mabry and MU golfer John Kelly from winning the Kansas Golf Assn. Four-Ball title after four playoff holes at Alvamar.

On Monday, though, the Tiger senior started the day with a 67 on the public side before heat, high winds and hard greens made him settle for a 73 during his second round.

"I had a little trouble coming in, and the winds were extremely tricky out there, but for the most part I had a pretty solid afternoon too," said Mabry, who lucked out with a replacement caddy - his father, John - when his original caddy couldn't make the trip. "I'm definitely excited to head to Pennsylvania and be a part of that tournament."

Kansas University golfer Peter Krsnich, Wichita, tees off on the 13th hole of a U.S. Amateur qualifier. Krsnich lost a sudden-death playoff with KU teammate Gary Woodland on Monday at Alvamar. Woodland thus won a berth to the U.S. Amateur, while Krsnich will serve as alternate.