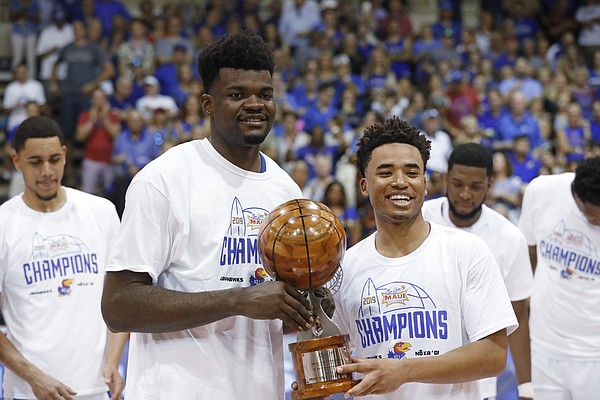 It's normal for players on Bill Self’s Kansas basketball teams to wind up on All-Big 12 teams in March, but not once in his previous 16 seasons did Self coach a team with two stars so productive that either could easily have won conference player of the year.

Of course, that changed in year No. 17, thanks to Udoka Azubuike and Devon Dotson.

A 7-foot senior center, Azubuike ended up sweeping the Big 12 player of the year awards, earning the distinction from both the conference’s coaches and the Associated Press.

But that didn’t mean Azubuike was the obvious choice. AP voters gave the big man 10 votes, but seven went to his teammate Dotson, a sophomore point guard.

Azubuike intimidated on the interior, while Dotson reigned on the perimeter. They formed an ideal complementary duo and made up the driving force behind KU’s incredible 17-1 run through the Big 12.

Was one more responsible for the Jayhawks’ success than the other? You could make strong cases for either and still not convince someone on the other side of the argument. Ultimately, both sides are right, because the dominating center and high-speed point guard formed a reciprocal pairing that resulted in KU emerging as the top-ranked team in the country.

Self said earlier this week he never had before coached a tandem with such a hefty one-two punch that it was difficult to discern which player was actually better.

“Yeah, when we had Marcus and Markieff, they were hard to distinguish,” Self joked of the Morris twins. “From a postseason award standpoint, I don't know that we've had anything like this before.”

Just in two of the previous three seasons, Self coached clear-cut All-Americans in Frank Mason III (2017) and Devonte’ Graham (2018) who were obvious choices for Big 12 player of the year. The same was true earlier in the decade, with Marcus Morris (2011) and Thomas Robinson (2012). And even though Mason and Graham were teammates in 2017 and Morris and Robinson played together in 2011, there was always clear separation between those KU duos in those particular seasons. Robinson and Graham each stepped up to become “the guy” after a teammate with a key role moved on.

In Azubuike and Dotson, Kansas (28-3) has two of “the guys” entering the postseason together.

Self thought the only time KU could have had a somewhat similar scenario was 2014, when the Jayhawks’ top two freshmen, Andrew Wiggins and Joel Embiid, went on to become two of the top three picks in the draft. Of course, that combo never got to realize its March Madness potential, as Embiid suffered a season-ending injury late in the regular season and KU lost as a No. 2 seed in its second game of the NCAA Tournament.

Azubuike and Dotson are more likely to become two of the top three picks in the second round of the draft, but they’ve turned into highly effective college stars. The Jayhawks haven’t benefited from the presence of such a valuable pair of players since the year before Self arrived. In 2003, big man Nick Collison and fleet-footed guard Kirk Hinrich took KU all the way to the national championship game.

Azubuike and Dotson are the most impactful Kansas duo since, and exceptional enough in this college basketball season that they could take the Jayhawks one step further — and maybe help deliver KU its first national championship since 2008.

Has Dok-Dot ever been on Tik-Tok? 😜

Mason would seem to be paired with Jackson

Devonte was with a young Dok and the Guards, of which Svi was the 2nd man up.

I'm pairing TRob with Taylor, especially since they played the point and post.

Same for Collins and Aldrich.

Hmmm, I wonder what the stats, rankings, etc. are for each pair during their final season.

Let's Name 5 Other Key Players in the Nick of Time.

DOW - Christian Braun. Calls himself Brown and has his Ups and Downs.

DOC - Isaiah Moss. Doctor "I" has a Silky, Smooth Stroke at Crunch Time.