Jayhawks see pros and cons of mastering art of comeback 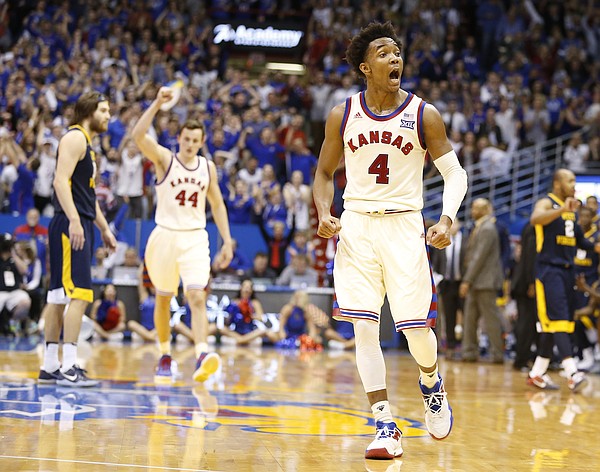 Kansas guard Devonte' Graham (4) gets fired up as the Jayhawks close in on the West Virginia lead during the second half, Monday, Feb. 13, 2017 at Allen Fieldhouse. by Nick Krug

On its climb to the No. 1 ranking in the nation, the Kansas basketball team hasn’t played perfectly over the past several weeks. Even so, at times it seems as though Frank Mason III, Devonte’ Graham, Josh Jackson, Landen Lucas and company are just genetically predetermined to win.

The Jayhawks’ penchant for overcoming even the grimmest scenarios reinforces the team’s bravado. They may lack the depth and the rim protector of Bill Self teams of the past, but the more often they scrap their way out of a jam, the less such situations worry them.

Through 30 games, KU (27-3 overall, 15-2 Big 12) has fallen behind by double digits in eight games. But the Jayhawks’ interminable resolve allowed them to escape seven of those with a victory.

“You know, I don’t know if I’ve been a part of a team that’s done it this many times and has been so consistent at it,” fifth-year senior center Lucas said. “And I would really just say each time it happens it gets more and more comfortable with us. I think the first couple of times it was just because we had good experience, good leadership, want-to and toughness. And then the more we do it the more it becomes kind of, ‘All right. This is nothing new,’ and we’re very capable of doing it.”

There’s a part of Self that loves seeing his players master the art of the comeback. But KU’s tough-minded coach isn’t about to throw a party for them.

“It's good. I mean, it's good that no matter what happens, you know, the guys haven't panicked,” Self said on the subject of KU winning after trailing by double figures. “It's bad that we’ve put ourselves in a position to be behind in some of those deficits, but when you're playing in a league that is as balanced as our league, I don't think that's totally unusual.”

The coach on Thursday then guessed aloud the Big 12’s other top teams — West Virginia, Baylor and Iowa State — had most likely experienced similar ups and downs during the courses of individual games.

“You know, Iowa State, a 10-point lead at Iowa State means nothing, nor does a 10-point deficit,” Self explained. “And I think offenses have changed so much and defenses and rules and everything's changed so much, it's easy for an offensive team to get on a little bit of a roll — especially early in the game, because you play a little defensive on defense and that kind of stuff.”

In fact, ISU, Baylor and WVU have combined to win eight games in which they trailed by double digits this season (see list below).

Ten times during Big 12 play alone Kansas has trailed by nine or more points, posting a 9-1 record. The Jayhawks’ only loss in those games came at West Virginia, when they fell behind by 19, on Jan. 24.

On the season as a whole, KU has trailed by eight or more points 12 times, with an 11-1 record.

“But we've gotta correct it,” Self said of falling behind and putting themselves in such tough spots, what with the postseason one game a way.

Lucas, as well, said he hopes the Jayhawks don’t have any more mega-recoveries in their immediate future.

“But we do understand if that is the situation in any of the games,” the senior added, “that we’re very capable.”

I hope we don't make a habit of this in the Post-Season. As they say, it could really bite us. Just saying. . .

How about mastering this: