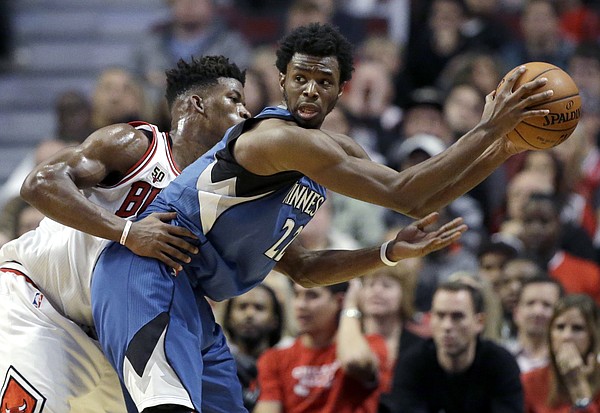 For all the points he has put up and all the wicked dunks he has thrown down since entering the NBA as the No. 1 overall pick in the 2014 draft, Andrew Wiggins still has ample room to grow in terms of the impact he can make for Minnesota.

In his three professional seasons since leaving Kansas, Wiggins’ scoring average has climbed each year, and he produced 23.6 points per game (16th in the league) in 2016-17. However, his 6-foot-8 frame, 7-foot wingspan and elite athletic ability haven’t helped the young wing become the defensive stopper many envisioned.

During Butler’s appearance on The Bill Simmons Podcast, Wiggins’ reputation came up as Simmons and Butler discussed Minnesota’s roster. The host referenced Wiggins’ below-average defense, as recently detailed at FiveThirtyEight.com.

In a feature titled “The NBA Haters’ Ball,” FiveThirtyEight identified Wiggins as the league’s “Least Defensive Player.” That unwanted label got thrust upon Wiggins after some player-tracking data examined shots defended by individuals during the 2016-17 season and the results of said attempts.

“Possession by possession, there are a few defenders who are as bad as Wiggins,” Kyle Wagner wrote. “When Wiggins contests a shot, opponents have a 56.1 effective field goal percentage; when they are unguarded, they have a 56.4 eFG percentage. Fundamentally, getting a shot up against Andrew Wiggins is the same as getting an open shot.”

According to the evaluation, Wiggins’ liabilities included a lack of full effort and ball-watching.

“He defended the 10th-most shots in the league, by far the most by a below-average defender,” Wagner added at FiveThirtyEight. “Most teams do their best to hide their weak defenders, but opponents seek Wiggins out like no other defender in the league.”

A three-time second-team All-Defensive team selection, Butler expects he can mold Wiggins into a far more competitive and potent player on the defensive end of the court.

“He has all the tools to be a terrific defender, by the way,” Butler said on The Bill Simmons Podcast. “But it’s different when somebody’s just telling you something all the time and somebody’s showing you: This is what playing both sides of the floor can get you.”

When Wiggins joined Minnesota three years ago, he had no savvy multi-time all-star to show him the NBA ropes. The Timberwolves have been somewhere between mediocre and awful throughout their current 13-year playoff drought, but finally appear to have a postseason-worthy roster thanks to the summer additions of Butler, Taj Gibson and Jeff Teague, to go with Wiggins and star big man Karl-Anthony Towns.

Minnesota acquired Wiggins with the idea that he would one day become an all-star wing such as Butler. Now the 22-year-old Canadian prodigy has a chance to learn every day from one of the league’s best all-around perimeter players long before entering the prime of his career.

“He is extremely talented on the offensive end,” Butler said of Wiggins. “And I think he’s going to be just that talented on the defensive end, as well, as long as you lock into it. I think he has that will and he wants to be great, so he’s going to want to do it. And I’m excited to get with him, just because I know how passionate he is about the game — his drive and his work ethic and how he wants to win. When you have that as a young guy, you have it. You can’t really teach that; you just have it.”