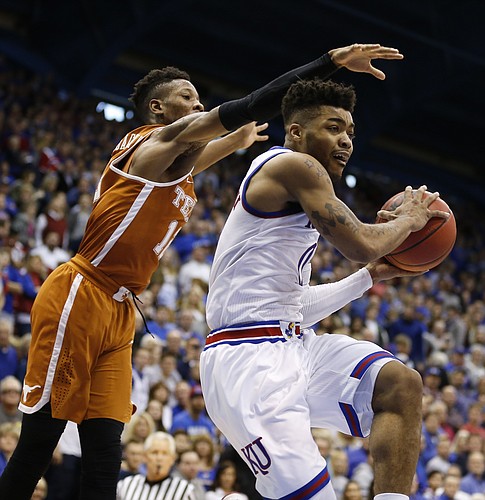 Kansas guard Frank Mason III (0) gets under Texas guard Kerwin Roach Jr. (12) to throw a pass during the second half, Saturday, Jan. 21, 2017 at Allen Fieldhouse. by Nick Krug

None of Frank Mason III’s 12 Kansas basketball teammates would consider the senior point guard and leader a selfish player. Sometimes, however, the 5-foot-11 Mason just has to take over.

The Jayhawks weren’t exactly in dire straits, up eight against Texas at halftime Saturday afternoon at Allen Fieldhouse, but they definitely needed a more assertive Mason down the stretch to win, 79-67.

The veteran has played too many games for KU — 128 and counting — to be unaware of when and how to pounce. It’s instinctual for Mason at this point.

Take one second-half possession as an example. Attacking off the bounce from the perimeter, toward the paint, Mason spotted sophomore big man Carlton Bragg breaking toward the rim behind the UT defense. The point guard jumped off his left foot near the free-throw line appearing poised to float a lob pass Bragg’s way for an easy alley-oop. At the last second, though, Mason opted to take a shot instead, flicking a teardrop high and through the net.

His form on the difficult runner characterized it as one of the floaters he has mastered in his fourth season with Kansas, but just to make sure, Mason was asked about the play after the Jayhawks won their 18th consecutive game, and he finished with double-digit points (17) for the 18th time this season.

The typically stoic play-maker had to laugh when reflecting on the shot that could’ve been a pass if he had altered his aim a couple feet to the right.

“It was actually a floater, but I thought about it,” Mason said, explaining how one of his 15 shot attempts and seven makes was a split-second decision. “That should’ve been a lob to Carlton. It was just a mistake on my end. I’m just happy it went in.”

That’s a charitable assessment. Mason could’ve joked he trusted his shot over Bragg’s, given that one of them is a likely All-American and the other is still trying to find out how to thrive as one of two inside options for the Jayhawks (18-1 overall, 7-0 Big 12). That’s not Frank Mason, though. 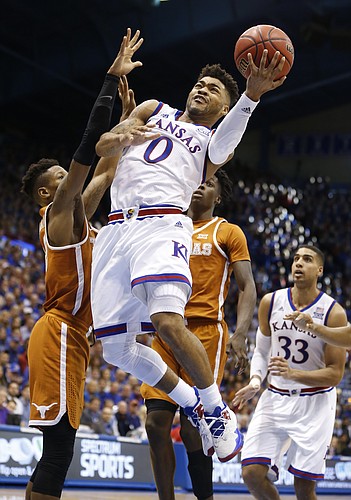 Kansas guard Frank Mason III (0) gets in for a bucket past Texas guard Kerwin Roach Jr., left, and Texas guard Andrew Jones during the second half, Saturday, Jan. 21, 2017 at Allen Fieldhouse. by Nick Krug

Mason — averaging 20.1 points and 5.4 assists on the season, following his 17-point, seven-assist outing versus Texas — is a team-first guy. And what Kansas required of him during the final 20 minutes was to control the game.

At intermission, Mason only had five points and three assists, and was 2-for-6 from the field. He only played 14 minutes, due to picking up his second foul midway through the first half.

So what did the cagey Petersburg, Virginia, native do to finish the game? Mason never left the floor in the second half, shot 5-for-9, scored 12 points, dished four assists and did not turn the ball over. He carried the team to its destination after backcourt teammate Devonte’ Graham bolstered the offense in the first half, with 15 points on 5-for-9 shooting.

Texas coach Shaka Smart noticed how well the two complemented each other.

“I thought Mason and Graham were awesome in just the way they controlled the game,” Smart said after his team fell to 7-12 overall and 1-6 in the Big 12. “Looking at the stat sheet, those guys — 12 assists and one turnover. That’s what veteran guards do. And then they made some really timely shots, too — six threes between the two of them.”

Mason knocked down two of his four 3-point tries in the victory, bringing his season percentage to .537 — one of the countless examples of the senior’s mammoth impact.

So what changed for the compact floor general to close out the win against Texas?

“Nothing,” Mason said. “Just think I was more aggressive the second half and my teammates found me. I made plays for them and myself. That’s it.”

He would know. No one on the floor has a better feel for what the Jayhawks need. 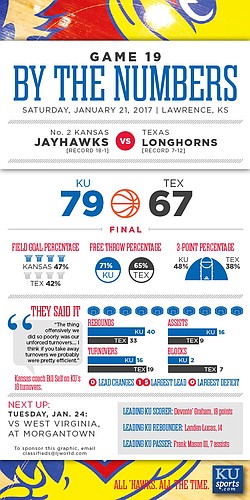