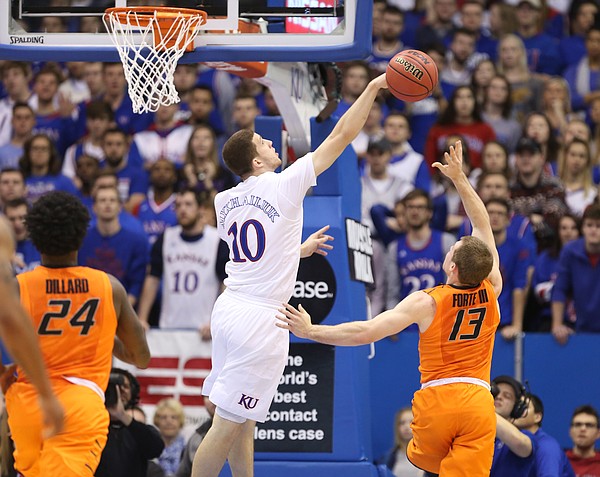 The undersized, predominantly four-guard Kansas basketball lineup, as it has become so adept at doing this season, gathered enough rebounds inside and even blocked shots here and there Saturday while defeating Oklahoma State, 87-80. A plus-nine margin on the glass and five swats: the types of things the Jayhawks will have to continue doing to win while only playing two bigs — senior Landen Lucas and sophomore Carlton Bragg.

However, KU had less success stopping the Cowboys from getting to the paint for easy buckets. OSU converted eight layups and a tip-in while maintaining a first-half lead, then converted four more layups, two put-backs and a dunk in the final 20 minutes. All of those added up to give the visitors a 44-38 advantage in points in the paint.

It marked the fourth time in five Big 12 victories the Jayhawks (16-1 overall, 5-0 conference) were out-scored inside.

KU’s lack of an interior defensive enforcer — 6-foot-8 wing Josh Jackson leads the team with 24 blocks in 17 games — has been well documented, and head coach Bill Self referenced that as a concern even before freshman center Udoka Azubuike’s season-ending wrist injury. So the Jayhawks know opponents want to get to the lane via drive or post-ups for high-percentage shots. Self’s players just haven’t yet totally mastered the strategies they’ll need to employ to best defend that coveted real estate near the basket.

Much like Nebraska, TCU, Kansas State and Oklahoma, the other teams to put up more points in the paint than KU head-to-head this season, Oklahoma State (10-7, 0-5) did so without the help of a go-to post player. Kansas keeps winning, but it has issues containing both penetration and pick-and-roll actions initiated by opposing guards.

Junior KU guard Devonte’ Graham acknowledged giving up so many interior baskets was an issue.

“The offense that they run was kind of tough to guard with the back cuts and having to guard the shooters out there,” Graham said, referencing the 3-point abilities of Phil Forte and Jeffrey Carroll when dynamic play-maker Jawun Evans had the ball in his hands. “So the bigs was kind of getting open on the back-screen ball screen, because it was hard to guard a back screen from the big and then come up and hedge the ball screen. So that’s where they was getting us a lot on.”

Of late, Graham added, the Jayhawks see more teams finding ways to effectively attack their guards from the perimeter.

“There’s a lot of teams since TCU really killed us and exploited us with it, they’ve been trying to run a lot of side ball screens and have their big guys just roll,” Graham noted of ways opposing guards make things easier for their post players, too.

Six-foot-nine OSU junior forward Mitchell Solomon entered Allen Fieldhouse averaging just 4.2 points a game this season. During one second-half stretch against KU, though, Solomon scored five straight baskets for the Cowboys, all in the paint. Before he fouled out late, Solomon went 6-for-6 from the floor and put up 16 points.

“I thought he killed us on the glass,” Self said, “but he only got four rebounds and three were offensive, and two of them were back-to-back putbacks.”

It didn’t take Self long to figure out how the OSU reserve easily topped his previous career-high for points (10, versus Rogers State): “Now granted he played very well, but Evans forced help, and then our rotations were slow. So even though he benefited from some plays, I think Evans deserves half the credit on those plays.”

Evans wasn’t the first guard hellbent on attacking KU and he won’t be the last. So when Solomon talks about his teammate’s expertise, picture other KU opponents to come mimicking the sentiment and replacing the name Evans with Monte’ Morris or Jevon Carter or whomever serves as that team’s ball-dominant guard.

“If Jawun’s aggressive, there’s really not anybody, I believe, who can stop him. So if he’s doing downhill he’s gonna attract a lot of attention,” Solomon said when asked if the Cowboys thought their ability to score inside versus Kansas would be a factor. “That leaves room for offensive rebounds if he doesn’t finish, which he does often.”

First-year Oklahoma State coach Brad Underwood game-planned for KU expecting the Cowboys’ 3-point shooting and the actions they run offensively to give them their best looks.

The opposition has taken note of one of KU’s weaknesses, so the Jayhawks should expect more of the same in the weeks ahead, around the Big 12 and at Kentucky (Jan. 28).

Self identified quicker defensive rotations and recognition from his guard-heavy lineup as one way to better defend the paint.

“Whenever there’s a ball screen, or pinch-post action or handoff that occurs, everybody’s gotta jump to it. And if you go back and watch the tape, Evans made some great plays to get the ball to Solomon. But our rotations were slow,” Self said.

“Whenever you go help somebody, the natural tendency is throw the ball in the direction that the help came from,” the coach continued. “So if you’re an alert defensive player, the tendency is that, ‘Well, if I know that they’re gonna throw it here, I should be able to put myself in a position not to allow that to happen.’ And we were slow doing that.” 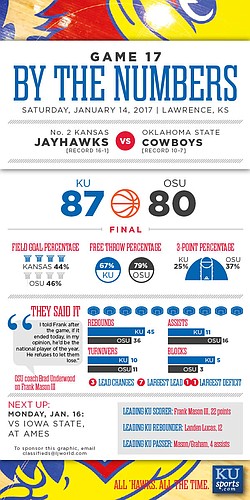 This is an excellent article. It explains very clearly our defensive weakness better than any previous story. And you can bet that every team we play will key on it. It may sound odd, since KU is currently undefeated and at the top of the conference, but I worry a lot about it. It is obvious in every game. But then again, I fully trust in both HCBS and the great kids in the program to figure something out.

Absolutely an excellent article.. The more article you have on analysis the better it is. B12 coaches eventually figures out ways how to beat the dynasty. Coach is either has to adopt multiple styles or ready his kids with stamina and quickness which is not going to happen with this team.

Agree, excellent explanations in this article. If Carlton can get it together, that will help. If Lightfoot can get the experience for that light to turn on and the game to slow down, that will help. And an absolute must is our big guys must stay out of foul trouble.

I wonder what kind of offensive plays used in practice by the coaching staff. If it's 'classical', typical coach Self's high-low, slow tempo offensive style; these kids will never never can catch up with most of teams down the road. They are coached and developed to play fast, motion attack, pick-n-pop, dribble drive, etc as Smith mentioned. Playing zone-D might alter the score significantly...just sayin'..

Basketball is a game of matchups. The Jayhawks play a slightly smaller but vastly quicker lineup than seasons past. There are matchup tradeoffs. Their record suggests that the tradeoffs are positive.