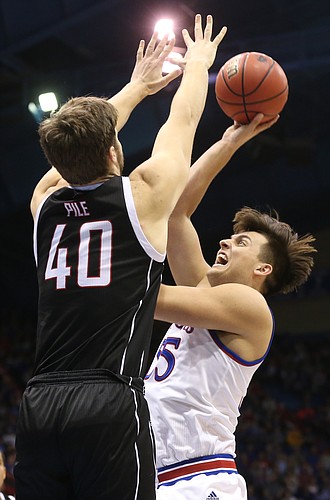 Kansas forward James Sosinski (55) puts up a shot against Omaha forward Matt Pile (40) during the second half on Monday, Dec. 18, 2017 at Allen Fieldhouse. by Nick Krug

A two-sport high school star in Arizona whose career path as a college athlete began with the UMass football program, James Sosinski’s past two years have included stints as a redshirt quarterback, a junior college basketball player and a first-time tight end. Monday night at Allen Fieldhouse, he added Kansas basketball big man to his résumé.

With only 3:40 left in the Jayhawks’ rout of vanquished Omaha, KU coach Bill Self had no problem emptying his still shorthanded bench and putting the Kansas football reserve on the floor for mop-up duty.

“I asked him, ‘Hey, can you do this?’” Self related of a back-and-forth with the 6-foot-7 forward from Chandler, Ariz., before Sosinski checked in. “And he said, ‘I don’t know any of it.’ I said, ‘Well, just ball-screen and run to the rim.’ And he did, and ended up getting a couple of baskets.”

Sosinski’s first action wearing his No. 55 Kansas basketball uniform — as opposed to his No. 89 KU football jersey — turned out to be a foul. But a defensive rebound of a missed free throw soon followed. And, as Self referenced, the final minutes of KU’s 109-64 drubbing of the Mavericks included Sosinski banking in a shot from the paint and tipping in a missed attempt by Marcus Garrett.

“Points per minute he led the team in scoring,” Self joked after Sosinski contributed 2-for-2 shooting, four points and two rebounds in four minutes. “But I thought he did good for a guy who doesn’t know what he’s doing at all.” 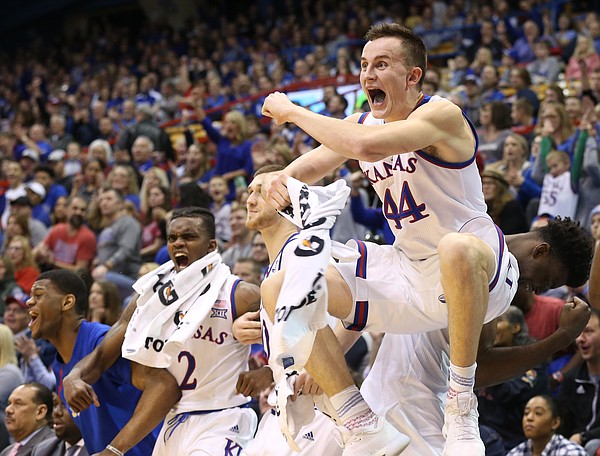 Kansas forward Mitch Lightfoot (44) leaps into the air with excitement after newcomer James Sosinski's first field goal as a Jayhawk late in the second half on Monday, Dec. 18, 2017 at Allen Fieldhouse. by Nick Krug

Following KU’s late November victory over Toledo, Self initially revealed he was looking into adding Sosinski to the basketball roster by having the backup tight end practice with his team. The 250-pound redshirt sophomore convinced Self through his efforts in those auditions he was worth a flier, and first suited up for Kansas against Washington, on Dec. 6. He just never found himself actually in position to play until Monday night.

“I knew that if I got the opportunity,” Sosinski said following his hardwood kickoff, “I would try to make the most of it and just work my hardest.”

The two-sport Jayhawk, of course, never figured when he arrived on campus this past August he would premiere as a basketball player instead of a football player.

“That’s crazy to think,” Sosinski said. “But it’s sure nice to get in.”

KU football coach David Beaty first introduced the idea of dabbling in basketball to him after the Jayhawks’ 1-11 season concluded, Sosinski said. Self had reached out to Beaty to inquire about the possibility, due to his team’s uncharacteristically shallow rotation.

Self didn’t guarantee Sosinski anything the first time they spoke, in late November.

“So I just went out there and hustled as hard as I could and tried to do my best,” the new Kansas basketball bench supporter said.

Such an improbable scenario never would have been possible had KU linebackers coach Todd Bradford not watched Sosinski at a football camp this past summer. The former UMass quarterback who broke his foot in 2015, and didn’t play that sport anywhere in 2016 eventually earned an offer to come to Kansas as a tight end, a position he had never played.

“Having a year off from football was hard,” Sosinski said, when asked about his role with KU football the past several months, when he didn’t appear in a game. “I didn’t take it for granted. I didn’t pout. I just tried to work hard every day and tried to get better, and I’m looking forward for the season next year and hopefully we can get back on track.”

Self isn’t in such dire straits, and made it clear from the time Sosinski joined the basketball program his role would be the same as one of the roster’s walk-ons. But the 15th-year KU coach thinks having Sosinski around has benefited the team — even if it’s as simple as being able to take him on the road and practice, as was the case this past weekend at Nebraska.

“But we really haven’t needed him as much as you would think,” Self added, because 6-10 freshman Billy Preston hasn’t been cleared to play yet, so he and 6-9 transfer Dedric Lawson have been practicing with KU’s red team. “So we’ve got some bigs there. But James is our best low-post defender on (starting center Udoka Azubuike). There’s no question. He can put a body on him and foul him and get him off his spot better than anybody, which I think is good for Dok to play against.”

The whole transition remains a work in progress for Sosinski, who admitted he probably still isn’t in basketball shape. But he feels grateful for his unlikely role, same as any minutes he might scrape together as an end-of-the-bench fill-in.

“They needed help in basketball,” Sosinski said, “and I just love going out there and helping the big guys get work in practice and helping everyone out.”

Exciting...always great to see the walk-ons get some playing time and some points.

He may get some brief, but meaningful minutes in 2018. Looks like he has basketball abilities we can use for in-the-paint defense. Could be good at preventing the second chance baskets. But, for now, he and Dok can do some heavy weight, practice session bangin".

Maybe #55 should get more playing time. More accurate near the rim and a coming on good defender!

He could be a solid asset to have. When playing opponents who have really good scorers he might be able to come in for 5-10 minutes just to play tough defense and prevent some of KU's offensive weapons from getting unnecessary fouls and give them some rest.

My son played a lot of ball against and with James growing up on different club teams here in Arizona. Even played against him in JUCO ball last year. One thing about James, he is unflappable. We played against some pretty big boys and the more contact there was, the more James thrived, his biggest grins were when the guy he was guarding was rough. When we get in games where we need to bang some down low, don't be surprised if he earns some minutes with that mentality! It was a surprise (had no idea he had gone to my alma mater) and thrill to see him on the court last night, getting some points were a huge bonus!

I’ll go out on a limb and predict that we are going to need this kid in a real game at some point. I really hope Self is open to that idea.

We need James Wiseman instead of Kentucky! Then we will be a great defensive team, but I'm not sure why Bill will recruit Lenghly players! Any one?

What are you talking about? KU is recruiting Wiseman: https://247sports.com/Player/James-Wiseman-88248

What a thrill it must be for Sosinski to be on the team playing in the Phog. And I just love this picture of Lightfoot!