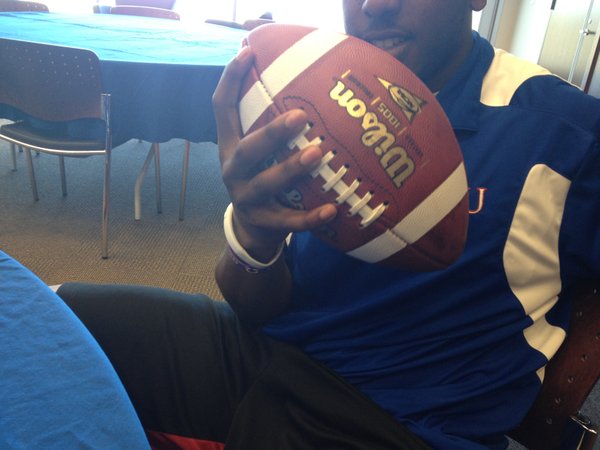 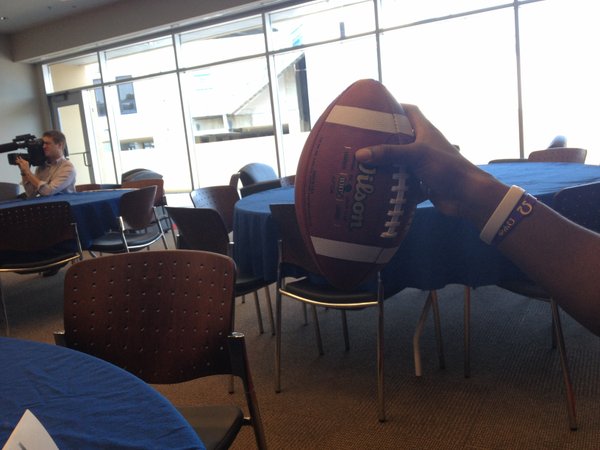 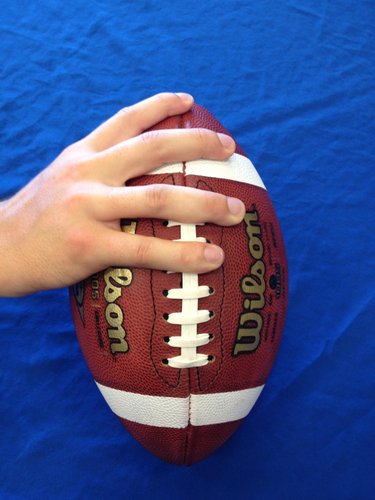 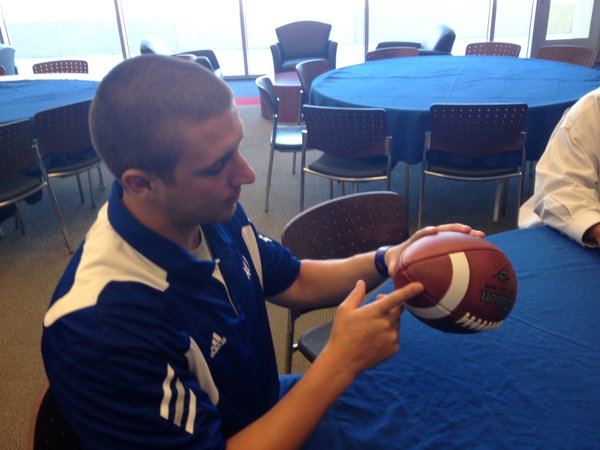 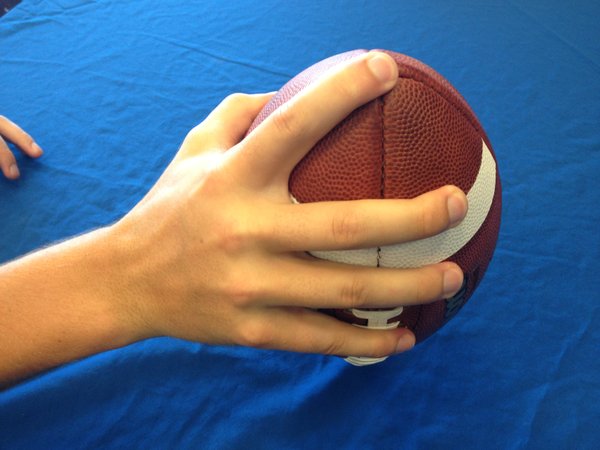 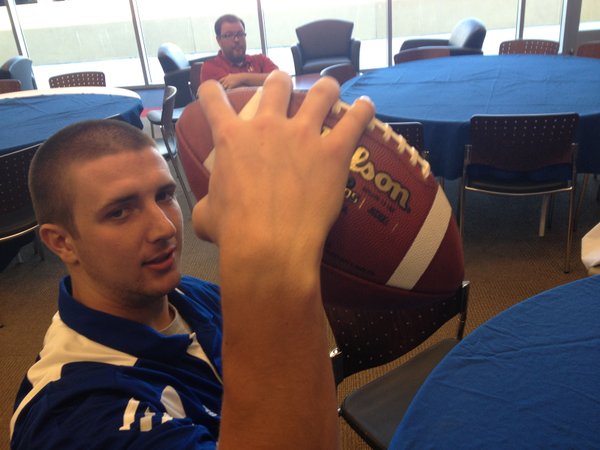 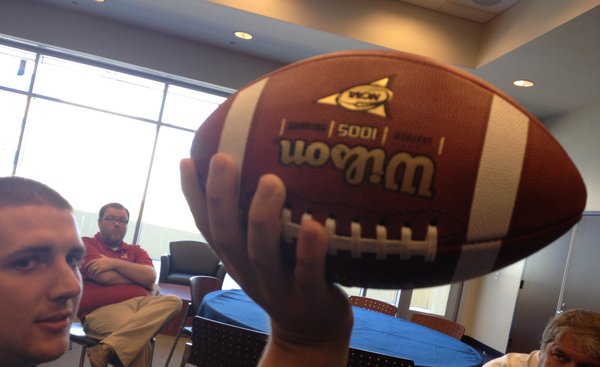 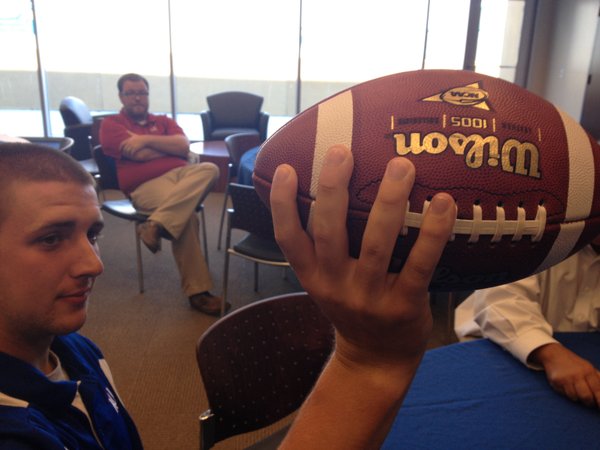 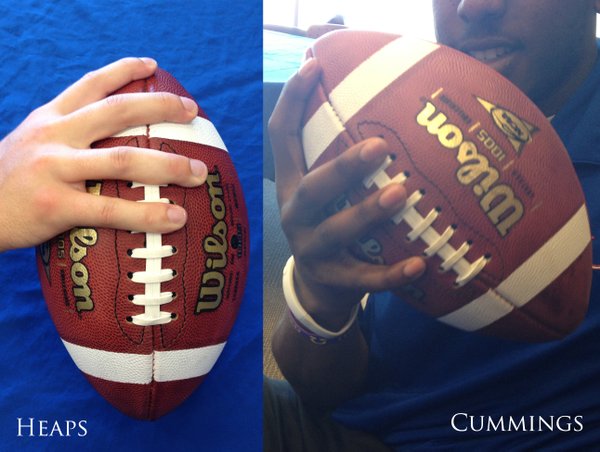 Good article, for non-football folks. I remember experimenting with different football grips and throwing motions with my NFL "Tagliabue-era" football in the early 90's, and watched closely how NFL greats were holding the ball and releasing it. Boomer Esiason also had the index finger almost to the tip of the ball, while Joe Montana held it just like Jake Heaps is showing. Randall Cunningham held it alot like Cummings is showing. Cool thing is you can see that Heaps is well-aware of the grips and the mechanics. Exactly what I wanted to see/hear. Shoot holes in the competition, Jake! Then drop BOMBS on 'em!

It's interesting that everyone has their individual grips and that the coaches don't mess with that part of throwing. It reminds me a little of the variety of putting styles.

Cummings hands look kinda small in that picture. If they actually are smaller than normal and that's not just the camera angle, that's a good reason why his throws tend wobble a bit and not be the tightest of spirals. I'm also happy to read that Powlus and Weis don't give a flip how the ball is held because it really doesn't matter much how you hold a football. I I remember the QB coach when I played would always get on our QB for not using the right grip, but our QB was awful when he tried using the suggested grip and threw a lot of wounded ducks, but almost always had a nice tight spiral when using his natural grip. Our QB coach was an idiot though and once he left, my HS has turned out two D1 QB's in the past few years including one that started as a true freshmen at his college.

I kinda thought like you. Cummings' hand looks larger than Heaps' to me 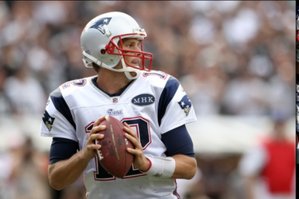 Looking at this photo, I disagree. I can clearly see three and a half spaces in the football stitching beneath his pinky finger on Brady's ball. Beneath Cumming's ball I see 2 and on Heaps' I see four and a half. So I'd say Brady's grip is right between the both of them based on hand spread.

"It's not a matter of how he grips it! It's a simple matter of weight ratios, a four ounce bird cannot carry a 1 pound coconut."

Suppose it's an African swallow?

Listen, in order to maintain airspeed velocity, a swallow needs to beat its wings 43 times every second, right?

"grip it and rip it"

One thing to note is that especially for a QB who plays a lot of shotgun formations and quick passes is that it shouldn't matter too much whether his fingers are on the laces. It comes down to getting your hands around the cone of the ball the same way whether the laces are in or out so that you can fire decent spiral no matter whether you have the ball turned just so.

But a three gram ant can carry a 30 gram twig 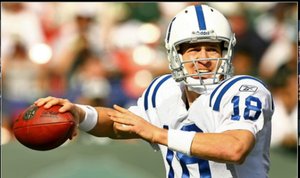 This was a cool article.

I have no idea how Cummings can throw the ball like that. It looks unnatural to me. WAY to spread out to get any control over the spin. That’s just my gut feeling from looking at it. Obviously he can somehow still sling it.

"the completion % will speak for itself"

To this day I think Cunningham had one of the prettiest releases ever. He looked effortless throwing the ball, but he didn’t grip it like Cummings. He had big hands and they were spread out a bit, but he kept them near the back of the ball, and his fingers were spread pretty even. His grip was much closer to Heaps.

Cummings’ fingers are spread unevenly. His pinky almost looks broken, and his index finger is all alone at the tip of the ball. I’m not saying he should change it. I agree, if it feels right do it. It’s’ just odd looking.

My take, too, KG. I grip it exactly like Heaps, third finger on the first grip.