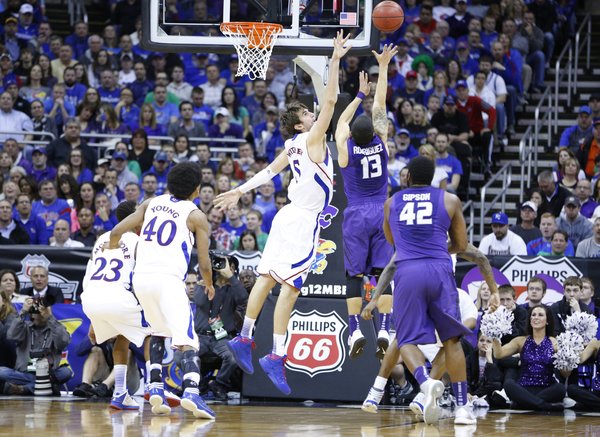 Kansas center Jeff Withey defends against a shot from Kansas State guard Angel Rodriguez during the second half of the Big 12 tournament championship on Saturday, March 16 2013 at the Sprint Center in Kansas City, Mo. by Nick Krug

1. Jeff Withey: After three games, Kansas State is still no closer to solving the defensive riddle that is Jeff Withey. Though KU's senior center had only one block, he altered numerous shots and was the big reason KSU made just 15 of 36 shots from two-point range (42 percent). Withey also came up big on the defensive glass against a strong offensive rebounding team, contributing 17 points (5-for-9 shooting), nine rebounds (seven defensive) and two assists with two turnovers in 34 minutes.

2. Perry Ellis: Though Withey took Most Outstanding Player honors, Ellis' play in the last two games certainly put him in the conversation. Ellis was key during a second-half run that put the game away, finishing with 12 points on 5-for-6 shooting with six rebounds in just 14 minutes. KU coach Bill Self said after the game that Ellis "looks like a different guy from a confidence perspective."

3. Kevin Young: Saved KU's sluggish offense in the first half, as he posted seven rebounds, six rebounds (three offensive) and two assists before halftime. The senior didn't appear hampered by a lower right leg injury, finishing with nine points (4-for-8 shooting) and nine rebounds with three assists to go with two turnovers in 27 minutes.

4. Travis Releford: After the game, Self said Releford "did an unbelievable job" defensively on KSU's Rodney McGruder, who finished with 18 points on 7-for-15 shooting. Self also said many times when McGruder scored, it was the result of a switch and, therefore, not Releford's fault. The senior added six points on 3-for-7 shooting and had three of KU's seven steals.

5. Naadir Tharpe: When Elijah Johnson struggled at point, Tharpe stepped in to provide needed stability for KU at that position. It also ended up being one of his best shooting nights of the year. Tharpe scored a career-high 12 points on 4-for-6 three-point shooting, making four threes for the first time in his career. He also added two assists to go with one turnover in 19 minutes.

6. Ben McLemore: McLemore was quiet offensively, scoring a season-low five points on 2-for-7 shooting. The rest of his line was OK, though: three rebounds, three assists, one block and one steal to go with a turnover.

7. Elijah Johnson: Was careless in the first half, then let those mistakes affect his play after that. The senior scored nine points on 3-for-9 shooting, but he had just three assists to go with six turnovers. His three-game hot streak seems like a distant memory, as in his last four games, he's made 12 of 40 shots (30 percent) with as many assists as turnovers (16).

8. Jamari Traylor: Missed his only shot but also had an impressive block in his two minutes.

9. Rio Adams: Played in the final seconds. Winner of the three-man KUsports.com lottery for ninth place.

11. Justin Wesley: Played in the final seconds. Loser in the three-man KUsports.com lottery for ninth place.

Tharpe's good game is a great sign for the NCAA Tournament. We must have at least 1 PG play well for us to reach the Final 4.

EJ seems like a great guy, but he is going to be the end of this team if he continues to play this way. 12-40 shooting with 16 turnovers in the tourney. Wow. Tharpe is quicker, has better assists, and is a better shooter.

EJ's between the legs dribble-pass to himself was the number 3 play in ESPN's top 10 tonight, however....

I did expect Naadir to be a bit higher. He was a major reason why we were able to essentially pull away in the 2nd half. He opened up the floor in a number of ways.

And Perry. Oh, sweet Perry. How does it feel? To basically be able to point to the couple of weeks when your college superstardom began? Welcome, Perry. You absolutely look like you belong and very few can stop you. And It couldn't possibly have come at a better time.

That's what I noticed in going over the box score. That really is about as efficient as a player can be.

Kind of reminds you of a T-Rob's 2nd year, huh? I've always thought Perry looks like a combo of Simien (KS kid, great offensive touch) and T-Rob (quick-twitch, rather explosive).

Good comparison but Perry also has softer hands than both of them, although Big Dub had a pretty soft touch.

ive always seen him as a timid lafrentz,skilled smooth and heady,but timid

you know Bain, every time I see your posts, I can stop from seeing BrainDead. Why you wanna mess with my head, Dread? LOLLLLLLL PS: Good post!

Perry was a pleasure to watch this weekend and his potential was obvious.

Hope Perry keeps it up. However, whenever a player is declared to have had a breakout game I always remember how many "breakout games" Sasha Kaun had in his KU career. And I enjoyed every one of them.

Now I have used the words flummoxes and non-sequitur today in sentences. Glory!!

Either I just had a mini-stroke or KY's line is wrong, above. Thanks for everything you do, awesome coverage as always.

Mr Newell: On behalf of the National Council to Promote the Use of Flommoxed in Headlines(NCPUFH), I'd like to think you for your continuing efforts. Sincerely, mejayhawk, esq

Opposing scouts figured out EJ's hot spots and deny them. They figured out his tells before he passes. Self and staff will dope it out this week.

But even if his slump were to continue, the opponents commitment to stopping EJ is largely what has opened things up inside.

If they ease off EJ, he will start to kill them again.

ive always seen ellis as a timid lafrentz, smooth and heady, but like i said timid.