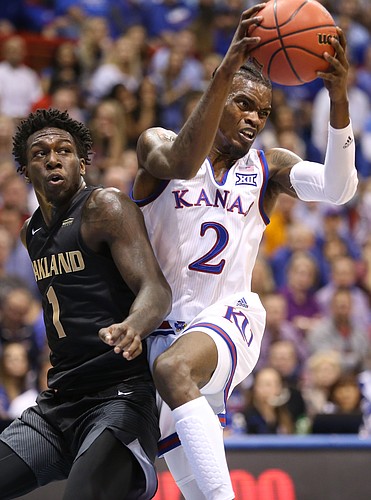 Kansas guard Lagerald Vick (2) looks to throw a pass while defended by Oakland guard Kendrick Nunn (1) during the first half on Friday, Nov. 24, 2017 at Allen Fieldhouse. by Nick Krug

1 - Lagerald Vick: Continues to do it all in efficient fashion. Didn’t commit a turnover, made 5 of 8 field goals, including 2 of 3 3-pointers, and had 15 points, seven defensive rebounds, three assists, three steals and three blocked shots on a night everyone played well.

4 - Devonte’ Graham: Had 14 points and seven assists, but also turned it over five times. Had two steals.

6 - Mitch Lightfoot: Had a perfect shooting night, making 3 of 3 field goals, his only 3-pointer, and 4 of 4 free throws. Totaled 11 points, eight rebounds and two blocked shots.

7 - Marcus Garrett: Had 10 points and five rebounds and made 5 of 6 field goals.

Very uncharacteristic of Graham at tonight's game (TOs). He has to learn from Newman how to finish the drive and getting fouled. Anyway, this ratings column would've been so much fun to read if you add what goes right and what area to improve on each player. Just sayin'.

If you didn't already know the result, and you just started reading from the bottom, and saw that the 7th-ranked contributor had 10 points and 5 rebounds on 5 of 6 from the floor, you'd probably deduce that the team did pretty well. Dang!

TKegan, your rankings are a box score. Journalistic effort, not exactly expansive. Was there leftover pumpkin pie that needed your attention??

I'm hopeful we'll see him again next year as a senior. I thought at the end of last season he might be a better player this year than graham. Graham is the leader no doubt but vick is good. All around good, he listens and works on it. Every game you see his concentration. I'd like to see him bulk up before nba so he goes in strong. Something seems fishy about how huge guys get suddenly in their first nba year. I'm sure hudy knows but isn't doing it.