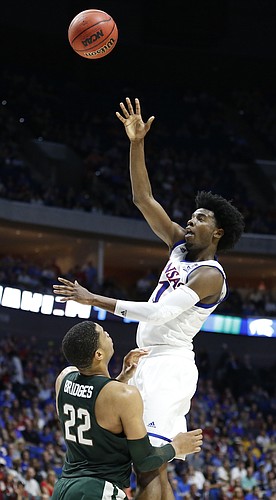 Kansas guard Josh Jackson (11) lofts a shot over Michigan State guard Miles Bridges (22) during the first half on Sunday, March 19, 2017 at BOK Center in Tulsa, Okla. by Nick Krug

1 - Josh Jackson: Scored 14 of his 23 points in a second-half highlight show that featured a big step-back 3-pointer and a one-handed jam that punctuated a quick drive down the lane. Is 4 of 4 from the free-throw line during the tournament. Spent a lot of time above the rim at both ends and was credited with two blocked shots and two steals, although a review of the game video might reveal more than that in both categories.

2 - Frank Mason: When nothing else works, it's nice for Kansas to know that Mason can always get to the lane and then the free-throw line, where he made 8 of 8 free throws. Heading into the postseason, Mason said he didn't see why Kansas couldn't shoot 80 percent from the line. So far KU is 31 of 35, 89 percent. Mason had 20 points, five assists and three steals and did not commit a turnover.

3 - Devonte' Graham: Just as easily could be ranked No. 1 on this list. Made four 3-point shots for the second game in a row, scored 18 points and had four assists and four steals. Made great passes in transition and in the half-court.

4 - Landen Lucas: Battled foul trouble, so he was limited to 25 minutes, enough time to produce a double-double with 10 points and 11 rebounds. Made a couple of nice hook shots.

5 - Sviatoslav Mykhailiuk: Solid with nine points, three rebounds and three assists without a turnover. Finished a nice lob from Graham for a flush in transition.

7 - Lagerald Vick: Had seven points and five rebounds, but needs to do a better job of recovering to his man behind the 3-point line.

8 - Carlton Bragg: Not his night. At all. Missed both shots, including a very easy one on an offensive rebound. Committed three fouls in five minutes.

Though his numbers weren't huge, his play was - I think Coleby deserves to be higher on the list for this game. He lays an egg, we could have easily lost this game.

He's behind Svi only because of the quantity of time in question. His play was pretty pivotal in basically shutting down the interior for the short time when Landen had to sit. No way he moves ahead of LL or the guards. It's a pretty tough standard to move up the list much at all. He did have a very pivotal part of the game

I would have ranked Azubuike ahead of Bragg. Azubuike doesn't cost us points and suck the life out of the team. If you could measure and report the negative value from a player, Bragg would lead the team every game. He is just plain horrible I would have put colby 5 last night

I would have ranked Azubuike ahead of Bragg. Azubuike doesn't cost us points and suck the life out of the team. If you could measure and report the negative value from a player, Bragg would lead the team every game. He is just plain horrible I would have put colby 5 last night

A huge note of thanks to Dwight Coleby. His style of tough play was needed and the dude delivered.

His style would include being tough for a big to back down towards the basket and we have seen in past games when possible he will jam a put back instead of making a soft backboard shot. He displays some nifly moves in the lane too. Hope this scholar-athlete comes back for next year.

I was about to say the same thing. No, his numbers didn't stack up, but the timing of the plays he made were huge, as was the boost he gave the team when he came in and gave them confidence when Lucas was on the bench.

Bragg has to step up...I think he will on Thursday. He's got to take some pressure off the rest of the team.