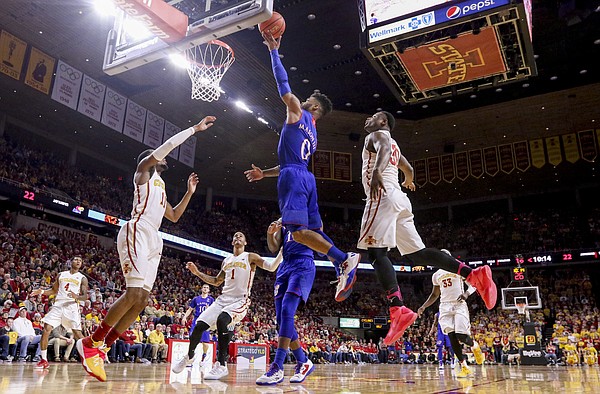 Kansas guard Frank Mason III (0) gets in for a bucket past Iowa State guard Deonte Burton (30) during the first half, Monday, Jan. 16, 2017 at Hilton Coliseum. by Nick Krug

2 - Landen Lucas: Did a nice job of establishing position against the much smaller Cyclones and turned it into 14 points and six rebounds.

3 - Devonte’ Graham: Had nine points, eight assists and had as many steals (two) as turnovers.

5 - Carlton Bragg: Crashed the boards hard enough to take five off the offensive glass and totaled 10 points and six rebounds. It was his first double-figure point production since he scored 15 points vs. Siena on Nov. 18.

6 - Lagerald Vick: Made most of his contributions in the first half and finished with eight points, five rebounds, three assists, two blocks, two dunks and a steal.

7 - Josh Jackson: Couldn’t get his shots to drop (3 of 11), but contributed in other ways, picking up eight rebounds, five assists and two blocked shots.

As we see Svi doing more things that shoot 3s, such as driving to the basket, and rebounding, it is very encouraging, also Bragg was really active tonight.

We have to get better on defense, but this team could make a run, if every one rebounds and plays defense.

I love this team -- Jackson had two great, winning plays in the last minute, made that block and recovered that loose ball for an assist ahead to take a one-possession game to out of reach; and yet, scoring him 7th in these rankings is right because of the tremendous play of everyone else, even in light of his top level non-scoring contributions.

This team is deep in talent, skill, and teamwork, as well as well-balenced, and consistent, with great leadership, tenacity, and, best of all, still room to grow. With Frank at the helm and this host of great athletes, shooters, and defenders as his fleet -- watch out!

I had to replay several times when Frank got that rebound, brought it up, calmly held it at center court, waved off his teammates, stared down his man, wiped his shoes (!), then triple crossed over, shot down the lane past his man and the help for a left-handed scooping layup, and made it look easy. Frank Mason III is the best player in the country. BIFM, StoneMason, Stoneface, Mighty Mase, The Phenom, Extreme Zero. (OK, I made up three of those nicknames, but he neeeds a lot of nicknames). What. A. Baller.