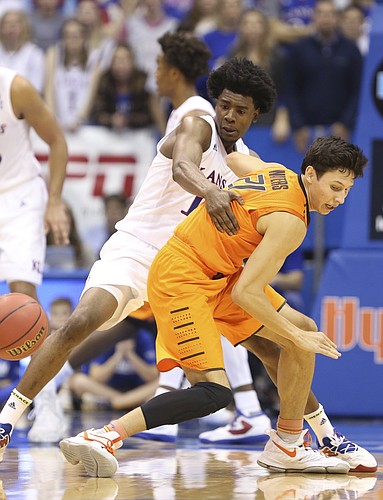 Kansas guard Josh Jackson (11) knocks a ball loose from Oklahoma State guard Lindy Waters III (21) for a steal during the second half, Saturday, Jan. 14, 2017 at Allen Fieldhouse. by Nick Krug

1 - Josh Jackson: Played great down the stretch, especially on the boards and on defense, and finished with 20 points, 11 rebounds, four steals and two blocked shots.

2 - Devonte' Graham: Showed great composure throughout, never losing his aggressiveness, and was the only player who was on from long distance. Made 8 of 14 shots, including 3 of 7 3-pointers, turned it over just once and had four assists and two steals.

3 - Frank Mason: Played 39 minutes and still had enough left in tank to play terrific second-half defense on Jawun Evans, limiting him to four points after an 11-point first half. Mason made just 1 of 4 3-pointers, but compensated well by attacking on drives that led to him shooting 12 free throws. Finished with 22 points, five rebounds and four assists.

4 - Landen Lucas: Dominated the boards in the second half, picking up nine of his game-high 12 rebounds to help KU gain a 27-15 second-half rebounding advantage. The easy buckets Oklahoma State's Mitchell Solomon picked up were a result of teammates' poor rotations when Lucas helped off of him.

5 - Svi Mykhailiuk: Made good things happen when he drove, which made his 1-for-6 shooting from 3 less noticeable than it otherwise might have been. Totaled 14 points and four rebounds.

6 - Lagerald Vick: Hit the boards harder than in recent games, taking three of his five rebounds off the offensive glass, but had a rough game offensively. Missed all three of his shots, didn't pick up an assist and turned it over three times.

7 - Carlton Bragg: His struggles in the paint might have led to less confident shooting overall. Missed a wide-open jumper at the free-throw line in the first half. Then again, he played just nine minutes, so he might have been able to shoot himself hot had he done enough other things to earn playing time.

Don't overlook the monster screens set in the paint by Lucas. They cleared lanes to the basket for his buddies to drive to the hoop.

That's one of the reasons why his teammates want him in the game.