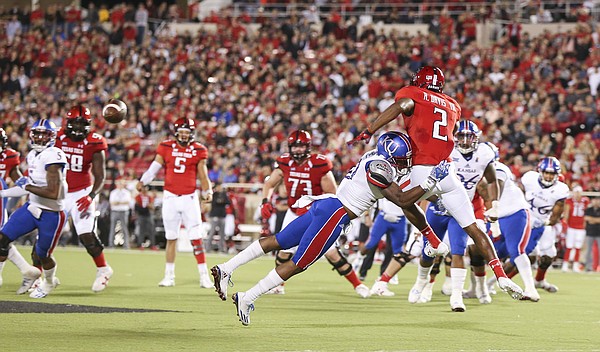 2. Ben Johnson – Knows how to get open. Had five receptions for 86 yards.

3. Fish Smithson – Timed his leap perfectly to come down with interception and mixed in five tackles.

4. Keith Loneker – Put Kansas on the board with a safety and dropped an interception he might have turned into six points. Plays with a lot of fire.

5. Marcquis Roberts – The box score shows he was in on five tackles, including 1.5 behind the line of scrimmage. What it doesn’t show is how much he must inspire teammates who watch him limp off the field after every game, his body screaming after another solid effort in which he gets the most out of his ability because he’s such a smart driven football player.

6. Damani Mosby – Quietly having a strong senior year, he made two tackles behind the line of scrimmage.

7. Steven Sims – Had six receptions for 59 yards and a touchdown.

8. Cameron Rosser – Put heat on the quarterbacks all night and had three tackles, one sack.

9. Courtney Arnick – Five tackles, one for a loss.

10. Joe Gibson – Returned to the lineup after an injury and the snaps were true.

Did you not see that snap by Gibson to no one when Stanley was not even ready yet?