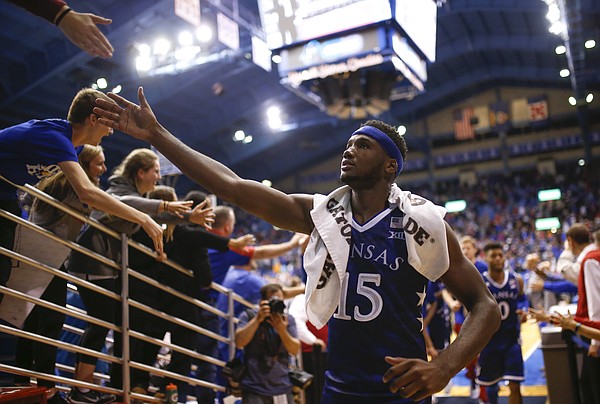 Kansas forward Carlton Bragg Jr. (15) slaps hands with the fans as he leaves the court following the Jayhawks' 86-65 win over Siena on Friday, Nov. 18, 2016 at Allen Fieldhouse. by Nick Krug

2 - Devonte Graham: Missed all three of his three-pointers and didn’t always play at his typically fast pace, but even at that, he had a big hand in Kansas getting enough good shots that it posted a .569 percentage from the floor. Had nine assists and didn’t turn it over.

3 - Frank Mason: Made some big shots when the game became tight and has led the team in scoring all three games, this time with 18 points.

5 - Josh Jackson: Made three beautiful passes early, mixed in a quick-jumping blocked shot at the hoop, stole a pass and took it all the way for a slam and generally looked like the best player on the floor when he was on the floor, which was only 21 minutes because of foul trouble.

6 - Landen Lucas: Blocked five shots in 21 minutes to go with six points and five rebounds. Didn’t win any points with the coach by expressing dissatisfaction with the refs’ whistles after play resumed.

7 - Svi Mykhailiuk: Heated up late to finish with eight points in 19 minutes.

8 - Udoka Azubuike: Large people tend to feel the fatigue of travel more than smaller individuals and he looked a little tired in his seven minutes. Even so, he managed three rebounds and a blocked shot.

9 - Dwight Coleby: Made his Kansas debut and picked up a defensive rebound.

10 - Mitch Lightfoot: Limited to one minute and joined the trillion club.

Carlton played very well. I still he could be looking for his shot more - there were a few times where he was open in the high post and didn't even look at the basket. He is too good of a player not to at least look at the basket when he has that kind of position.