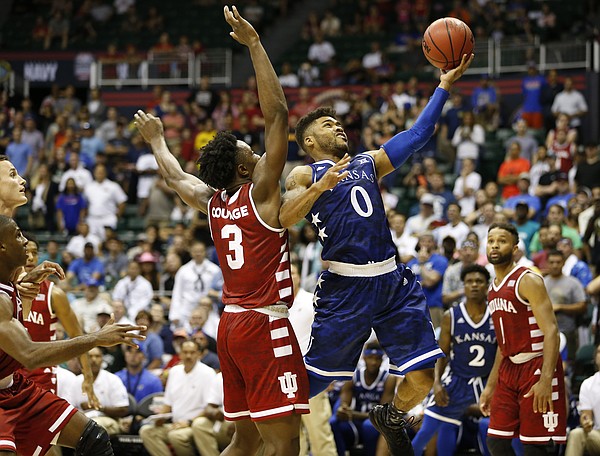 Kansas guard Frank Mason III (0) gets to the bucket past Indiana forward OG Anunoby (3) during overtime of the Armed Forces Classic at Stan Sheriff Center, on Friday, Nov. 11, 2016 in Honolulu, Hawaii. by Nick Krug

1- Frank Mason: His drive that he finished with his left hand over Thomas Bryant, and one, gave Kansas an 82-81 lead with 2:20 left. Indiana scored the next six points and Mason attacked again, finishing while getting fouled and making the free throw to pull KU within 87-85 with 1:04 left. Mason again took on the entire defense and would have delivered another three-point play but for his free throw clanking with 40 seconds left. Yet again, Mason delivered, getting fouled driving to the hoop and making a pair of free throws with 2.3 seconds left to tie it, 89-89, and force overtime. Mason led the team in scoring (30 points), rebounds (seven) and assists (nine). He turned it over just twice in 40 minutes.
Can you say All-American candidate?

3 - Devonte Graham: Fouled out with 13 seconds left and cramped up badly. Tough shooting night (3 for 11) from the field, better one from line (8 of 9). Totaled 16 points, four rebounds and three assists.

4 - Carlton Bragg: Had strong first half offensively, scoring eight points on 4 of 4 field goals, but struggled defensively and was whistled for third foul early in second half. Gave Kansas a boost when he returned to the floor. Made his first six shots from the field and finished 6 of 7 with 12 points and four rebounds before fouling out after playing 18 minutes.

5 - Josh Jackson: Struggled with his shot (3 for 11) and picked up his fourth foul before the midway point of the second half, but didn’t run away and hide. Stayed aggressive and finished with nine points and six rebounds. Follow slam with 34.8 seconds left in overtime after Mason's driving shot rimmed out was highlight of his night. It pulled Kansas within two points. He and Lagerald Vick did a nice job of executing a trap in the corner to force Indiana into using its final timeout with 26.5 seconds left in overtime.

6 - Landen Lucas: Scored 11 points but had tough night defensively at times and on the boards (seven) and especially in transition. Looked to be slowed by sore foot.

7 - Lagerald Vick: He’s going to get a high number of steals and is super quick with a nice three-point touch, but needs to refine shot selection. For a second, coach Bill Self looked as if he was trying to squeeze his temples together after Vick pulled up from 18 feet and flung a guarded shot. Vick totaled seven points and two steals.

8 - Udoka Azubuike: Scoreless in seven minutes with two rebounds, two personal fouls and an impressive blocked shot. Not yet skilled at using bulk to carve out rebounding position. Then again, he just turned 17.

9 - Mitch Lightfoot: Played a minute at the end of the first half and committed a foul. Returned with 41.5 seconds left in overtime when Josh Jackson fouled out and scored a put-back bucket.

Mason's stats look impressive. But, he drove too often. He could've made more assists by creating offense for others easily. Svi looked relax, but still made a couple of silly mistakes. Bragg needs to know how to box out, i hope he's not afraid to dunk. Lucas, he didn't look like bothered by sore foot. He still won't dunk without sore foot, i'm afraid.

Considering he carried KU on his back by driving and converting over and over, that's an odd statement.

Why doesn't Tyler Self get the honor of being ranked? Was I dreaming, or did he actually play when the game was on the line?

The rankings are only for scholarship players.