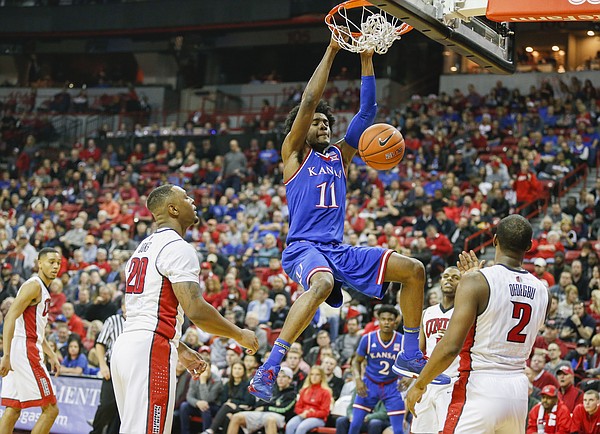 Kansas guard Josh Jackson (11) dunks against UNLV during the first half, Thursday, Dec. 22, 2016 at Thomas & Mack Center in Las Vegas. by Nick Krug

1 - Josh Jackson: Put on quite a show in the first half and couldn’t get his shots to drop in the second, when his trigger finger grew a little itchy. Finished with 21 points and nine rebounds.

3 - Landen Lucas: Didn’t get into foul trouble until the second half and was able to play 27 minutes and total four points and 12 rebounds.

4 - Frank Mason: Not one of his better efforts and still contributed 13 points, eight assists, five rebounds and two steals.

5 - Devonte’ Graham: Scored two buckets early and went cold for rest of the night. Made 2 of 9 shots and misfired on all five 3-pointers.

6 - Lagerald Vick: Needs to be more active than he was on this night. Totaled five points, two rebounds and two blocked shots but turned it over three times in 18 minutes.

7 - Carlton Bragg: Two fouls in seven first-half minutes. Not good. Has to figure out how to play defense without fouling so quickly now that team needs him to play many of the minutes vacated by out-for-season Udoka Azubuike.