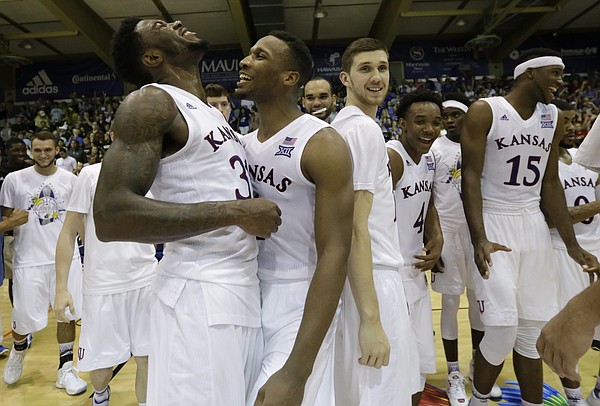 1 - Wayne Selden: MVP of the World University Games was MVP of the Maui Invitational. Junior guard matched career high with 25 points and only blemish of the evening came when he missed four consecutive free throws in the final minute of action. Had seven rebounds, a steal and a blocked shot, did not turn it over once and was not whistled for a single foul. Selden made 8 of 11 shots from the field and 4 of 6 from three. For the tourney, he made 12 of 17 threes and has made 17 of 29 for the season.

2 - Devonte Graham: Completed terrific tournament by producing 12 points and six rebounds and in the second half ensured that Kansas ended up with good shots.

3 - Frank Mason: As did Graham, he turned it over just once. Forced a couple of shots on drives, but put a lot of pressure on the defense and totaled 10 points, five rebounds and three assists.

4 - Sviatoslav Mykhailiuk: Seven-point effort included a couple of dirving shots kissed softly off the glass. Played most confident basketball of his Kansas career during the tournament.

5 - Perry Ellis: Had trouble getting shots off and rushed others against Vandy’s long post defenders and made just 1 of 8 field-goal attempts and turned it over three times. Contributed eight rebounds and had huge offensive board with Kansas protecting six-point lead with minute-and-a-half left.

9 - Hunter Mickelson: Had a point, rebound and assist in limited action.

With the exception of six or seven minutes when Tom Izzo's mind games distorted reality in the second game of the season, our Jayhawks have outclassed all comers, including Vanderbilt's ranked Commodores once some good shooting put the trees in their place.

Now, we'll see them start fresh with Cheik working his way into the deepest front line anyone can remember while their best outside shooter makes up his mind about how team basketball is played with HCBS running the show.

Can we expect to match one of (St.) John Wooden's remarkable feats without Sam Gilbert's considerable contributions during the decade when the NCAA first put college b-ball up for auction?

The strength of this team is the guards, not the big guys. We need to play through them more, and bring Ellis away from the basket where he is much better (which also gives our guards more room to drive the ball).

I love Mason, but he had a bad game. He missed a lot of shots and played bad defense, regularly letting his guy beat him off the dribble.

I understand why HCBS wants to keep Graham in the game--he is the only guard who rarely gives up dribble penetration. I was skeptical of Graham early in the year because of his questionable role on offense, but I am less so now. If Graham can average 11-12 points/game we could be a great team.

If Selden can keep up his ability to shine in offshore states or foreign countries like Oklahoma and Texas we are solid.