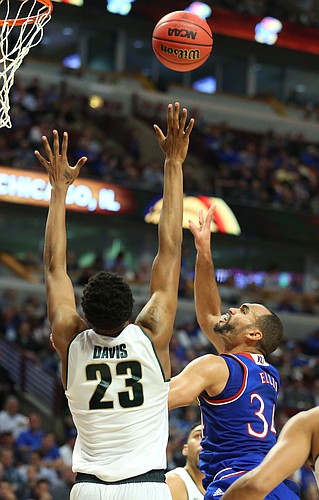 Kansas forward Perry Ellis (34) turns for a shot over Michigan State forward Deyonta Davis (23) during the first half, Tuesday, Nov. 17, 2015 at United Center in Chicago. by Nick Krug

No. 2 - Jamari Traylor: Did strong board work at both ends, made all four of his free throws and finished with six points and seven rebounds.

No. 3 - Carlton Bragg: Had a defensive lapse that resulted in a three-pointer and didn’t get a rebound in 11 minutes, but hit a pair of shots from the high post on a day not many teammates were hitting shots.

No. 4 - Frank Mason III: Didn’t always get the ball into the right hands at the right time. Made 5 of 15 shots and misfired on all three three-pointers, but also contributed five rebounds, three assists and three steals with just one turnover.

No. 5 - Sviatoslav Mykhailiuk: Did not attempt a three-point shot and couldn’t keep Denzel Valentine in front of him any better than anybody else could, but did contribute four points, two assists, a rebound and a steal in 12 minutes.

No. 6 - Brannen Greene: Didn’t attempt any shots from the field in nine minutes and did not get a rebound, but did make all six of his free throws and and had an assist.

No. No. 8 - Landen Lucas: Had seven rebounds in 14 minutes, six off the defensive glass, which is his greatest strength as a basketball player. Set up nicely by teammates, Lucas made just 1 of 5 shots from close range.

No. 9 - Devonté Graham: Rough, rough shooting night. Made just 1 of 9 from the field and missed all four three-point shots on a four-point scoring night. Had four assists, one turnover and one steal.

No. 10 - Hunter Mickelson: Played just three minutes, time enough to pick up a rebound and a foul.

KU looked no where near being a Top 5 team. Graham, Mason, and Selden played way below their capabilities and I don't buy the matchup argument for not using Hunter. Nonetheless, I think that KU can meet high expectations, especially if Diallo is cleared as we really need him for a strong presence inside!

Where is Bill Self on this? Why are you afraid to call him out for poor coaching?