Perry Ellis shows off his complete skill set vs. K-State 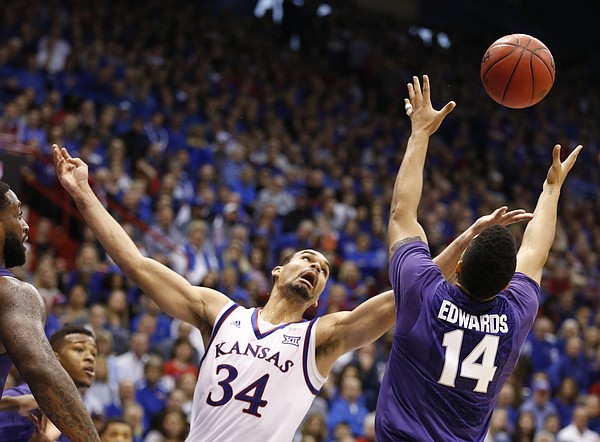 Kansas forward Perry Ellis (34) battles for a rebound with Kansas State guard Justin Edwards (14) during the first half on Saturday, Jan. 31, 2015 at Allen Fieldhouse. by Nick Krug

1 - Perry Ellis: Both when facing the basket and driving his man, and when using his footwork to set himself up for buckets, Ellis looked so quick. He made 7 of 9 shots from the field and had three assists and a blocked shot. Had a double-double by halftime on his way to 16 points and 12 rebounds.

2 - Wayne Selden Jr.: Blocked four shots, two of which drew quite a rise out of the crowd. Made 3 of 6 three-point shots and 2 of 7 two-pointers, widening the gap between his three-point (.360) and two-point percentages. Made Marcus Foster work hard for his shots.

3 - Kelly Oubre Jr.: Picked up all of his eight points and all but two of his nine rebounds in the first half and wasn’t nearly as active in the second half.

5 - Jamari Traylor: Did a better job on Thomas Gipson than did Cliff Alexander, and used his quickness to come up with two steals to go with three assists and two turnovers. Still doesn’t hit the open 15-footer, but did contribute six points and five rebounds..

6 - Frank Mason III: Threw a pass into the stands 99 seconds into the second half, after his roughest half of season (for non-Kentucky games) in many ways, and was replaced by Graham. Several minutes later, he returned and played well, extending his double-figures scoring streak to 18 games with a 10-point night. Made just 3 of 12 shots from the field.

7 - Devonté Graham:  Kansas State turned Graham’s taunting technical into four points. Had four assists and did not turn it over in 18 minutes. Had one steal. Hit just 1 of 4 shtos and got outmuscled on a few plays.

Biggest bright spot I saw yesterday was Jamari finishing consistently around the rim, in traffic, just like he did towards the end of the year last year. If that piece is there for this team, watch out.

It was sad that Cliff was out-classed by a lump such as Gipson.

Gipson may be a lump but he's an experienced lump. That can make up for a lot.

he's a lump who's had a solid career at KSU.

Considering his career stats along with the fact that this is the first year that we haven't had a serious height advantage on him, it's no surprise that he played well against us this year.

I was going to say those things about Gipson, just got here a little late.

Cliff is getting there, more slowly than we hoped, but moving in the right direction to bring on some class of his own as the month progresses. We may be singing praises by March – or even into April. Frank, Wayne and Perry show better poise most every game and the young-uns are taking the cues about focus and energy.