Worth asking: Does Billy Preston want to get drafted? 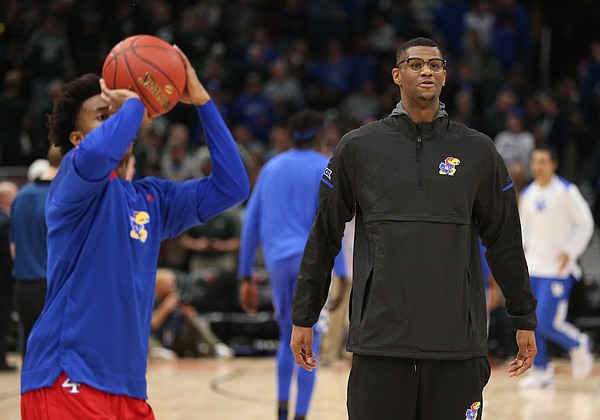 Kansas forward Billy Preston watches during warmups on Tuesday, Nov. 14, 2017 at United Center. Preston was held out of Tuesday's contest. by Nick Krug

Following the advice of his agent, Billy Preston scratched at the last minute from the five-on-five portion of the NBA combine.

Considering he never played in a game for Kansas and was hurt after a few games in Bosnia, Preston stood to gain as much as anybody by scrimmaging. Yet, he was told to scratch.

It makes so little sense that it makes me wonder if Preston’s agent wants him to get drafted.

Maybe he figures Preston can get a better deal as a free agent than as a second-round pick with a non-guaranteed contract. That way he can try to figure out which team has the most need for a player of his size and skill set.

Looking at the top 11 listed in the Rivals Class of 2017 recruiting rankings, three players have faded the most: Preston was ranked No. 11 and is projected to go No. 59 by The Athletic.

The cases of Robinson and Preston show that NBA General Managers give credit to players who show they can handle school, hard coaching and blending in with teammates. General managers didn’t get to see that with Preston and Robinson so it makes picking them a little riskier.

But all it takes is one GM willing to go off what he saw in high school.

I've long wondered if Billy Preston even wanted to play basketball. I'm sure he wants the money but my bet would be if he got on with any team, he'd spend most of the time on the sidelines (bench or DL).

Well Momma took the green stuff when it was offered. Honestly a pick in the 2nd round is not better than a free agent. So probably a wish to be a free agent is best for him. Even first round players will be watching from the bench.