Defensive notes from KU football vs. Baylor in Big 12 opener 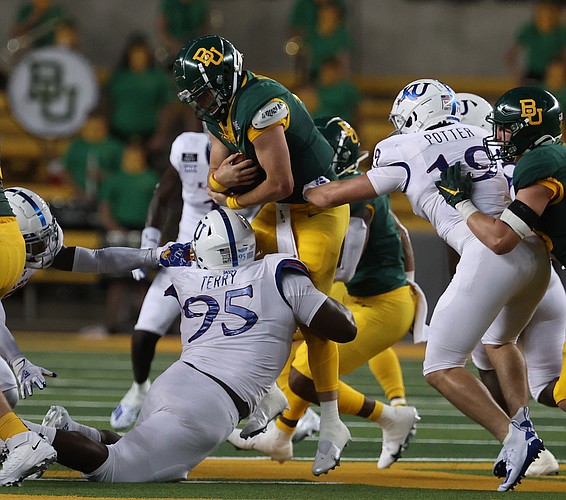 Kansas gave up 47 points in its Big 12 opener during a 47-14 defeat at Baylor this past weekend.

Technically, the defense shouldn’t have to take the blame for all 47 of those points. The Bears scored twice on a pair of kickoff returns, both of which occurred in the second half. It marked just the 18th time since 2000 that a team has scored on multiple kickoff returns in a single game.

Still, KU’s defense has struggled through two games by allowing an average of 42.5 points per contest. The Jayhawks have yet to record a takeaway on the defensive end, and have only recorded one sack as a unit.

After a rusty start, Baylor’s offense eventually was in cruise control against KU’s defense. Veteran quarterback Charlie Brewer kept making the right play, whether it was throwing to his hot route when he read a blitz or finding a soft spot in KU’s zone defense.

Let’s dive into this week’s defensive notes to get a better idea of what went right and what went wrong for the Jayhawks on that side of the ball.

This is supposed to be KU’s standard defensive look, featuring a personnel grouping of three defensive linemen, four linebackers and four defensive backs. However, it was not a popular personnel choice by the Kansas coaching staff on Saturday.

After using this grouping 27 total times against Coastal Carolina, Kansas only trotted out this personnel on five of its 65 defensive snaps against Baylor.

The main reason was because Baylor used fewer two-tight end sets compared to Coastal. In fact, all five of these snaps in the 3-4 base defense came when Baylor went 12 personnel (one back, two tight ends) on Saturday.

KU used its 3-4 defense, which is a formation that allows Kyron Johnson and Steven Parker to be on the field at the same time, against some single-tight end formations in the opener. Yet the Kansas defense chose to rely on its nickel package in such situations against a Big 12 foe.

In its standard nickel package, Kansas essentially subs a fifth defensive back in for the outside linebacker spot. Where that defensive back lines up ultimately changes, but is usually based on the offensive alignment.

The Bears ran mostly 11 personnel, which ultimately led to this defensive grouping for Kansas. Baylor piled up 210 yards on 47 plays when going with one back, one tight end against KU’s nickel package. BU also had three plays in 20 personnel, turning that into 45 total yards.

This was a new formation for Kansas, at least for this year.

In a lot of ways, it is similar to the “Peso” formation that Baylor head coach Dave Aranda made popular when he served as defensive coordinator for LSU. While I didn’t chart defensive formations a year ago, the Jayhawks did use this grouping at times last year.

On Saturday, Baylor was in 12 personnel on all seven plays and accumulated 78 total yards in this particular formation battle.

Watching live, it felt like the Jayhawks generated more pressure against the Bears compared to what they did in the season opener. I was curious to know if it was because the defensive staff chose to switch up its blitzes after what was a relatively basic opener.

But that wasn’t really the case. Kansas only sent five or more pass rushers on seven of Baylor’s 27 dropbacks. For comparison, KU blitzed five players on six dropbacks against the Chanticleers.

Most of KU’s pressure came when four players went after the quarterback, and any success in that department was probably a credit to defensive players winning more one-on-one battles against an injured offensive line.

Here is a breakdown of KU’s pass rush against BU by number of pass rushers:

Back in the Bottom Ten at number 6. Ugh!

The Bottom 10 is one of the best columns written, even if it does hurt when we’re included. It seems to me the big miss this week though was the ADs/conference commissioners that prematurely pulled the plug on the season and now are fumbling around with a reboot.