A look at KU's personnel usage in opener against Coastal 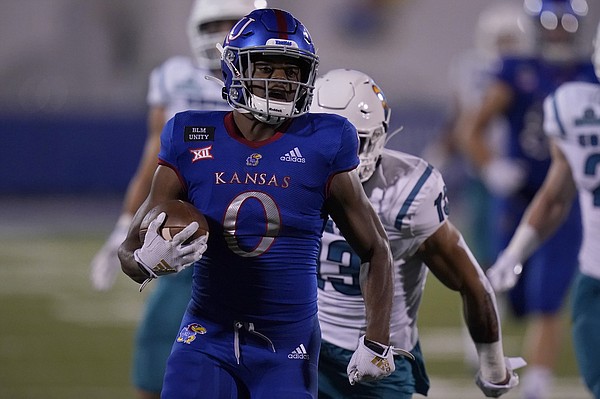 Although Brent Dearmon took over as the Kansas offensive coordinator midway through last year, there was certainly a level of intrigue entering the 2020 season opener against Coastal Carolina. Many were interested to see what KU’s offense would look like when Dearmon had a whole offseason to implement his playbook.

The result — a 38-23 home loss to CCU — was not what KU fans wanted to see or expected, especially with the hosts being nearly a touchdown favorite prior to kickoff. Even the offensive production, which featured 23 points and 367 total yards, felt like it was below expectations when you consider how explosive that unit looked at times under Dearmon in 2019.

But Dearmon’s offense did look different on Saturday, particularly when you compare formations and personnel used when Kansas dropped a 12-7 defeat to Coastal in Lawrence.

To better illustrate that, I have charted KU’s personnel usage just as I did during last year’s 3-9 campaign. I will share that information in this blog, while also providing a few of my own takeaways from what it all means.

Please note that personnel groupings are used to help identify the different types of skill players on the field for an offense. This information will be using the standard numerical identifier, a two-number system that lists the number of backs on the field first and number of tight ends on the field second. For example, ‘21’ personnel would be a formation with two backs and one tight end.

For a full explanation on this system, please feel free to check out this article on Inside The Pylon. 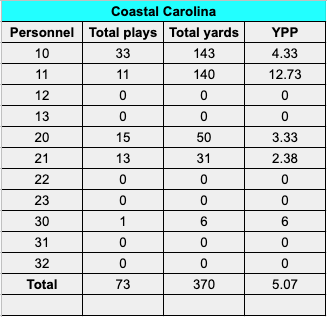 A look at KU's personnel usage against Coastal Carolina in the 2020 season opener. by Shane Jackson

It only took until the seventh play of the night, which occurred on the game's opening drive, for KU’s offense to give Coastal Carolina a completely different look.

That’s when the Jayhawks used a four-receiver, one running back formation (10 personnel) on 2nd-and-10. Quarterback Thomas MacVittie, who earned the start and played the first two drives of the contest, linked up with Takulve Williams for a 4-yard connection.

It marked the first time Coastal Carolina had to face Kansas in that particular personnel grouping. The Jayhawks didn’t run a single play with one running back and one tight end against the Chanticleers last year, which played a part in the many stacked boxes that the hosts had to face.

However, Kansas never really attempted to use the numbers advantage when in its four-receiver formation. KU only attempted a run on five of its 33 plays in 10 personnel, picking up positive yards on three of those carries that included a 10-yard run by Pooka Williams.

KU finished with 11 rushing yards on five attempts in 10 personnel because of one play that ended in a 7-yard loss.

Overall, Kansas finished with 143 total yards on 33 plays when going with 10 personnel for an average of 4.33 yards per play in such situations. The total number of plays in this look was inflated due to game script, as KU only had eight plays in 10 personnel through the first four drives, but it was worth noting after the team didn't try it once against Coastal last season.

Not as many plays in 21 personnel this time around

Another noticeable difference in this year’s rematch was the lack of formations with two backs and one tight end.

On Saturday, Kansas had 13 plays in 21 personnel while picking up a total of 31 yards for an average of 2.38 yards per play. For comparison, KU had 148 yards on 21 plays using that look against CCU last year.

Those numbers might indicate that Kansas should have tried that grouping a little more this past weekend. Yet, last year’s showing was inflated by some two-running back formations, as opposed to using a fullback. Former running back Khalil Herbert, who transferred to Virginia Tech this past offseason, had a 41-yard touchdown run on the game’s opening drive when Williams was used as a decoy.

In the 2020 season opener, Kansas only had both of its running backs (Williams and Velton Gardner) on the field at the same time on four plays. The Jayhawks had a sack on one of those plays, but recorded 26 total yards on three runs in the other three instances that both tailbacks were on the field together.

KU only had 11 plays with one back and one tight end against Coastal, but it featured more of an even split between the run and pass.

The Jayhawks elected to run the ball six times and threw five pass attempts in 11 personnel. On six of those running plays, three of them went for positive yards thanks to more running lanes with three receivers out there on the field to stretch the opposing defense out.

Gardner’s 61-yard touchdown run on the second drive of the second half came in 11 personnel. Williams also had a 12-yard run in a similar grouping during the first half. KU finished with 75 rushing yards on six attempts with one back and one tight end out there.

In the end, 11 personnel was the team’s best grouping in terms of production as Kansas finished with 140 yards and averaged 12.73 yards per play with that look.

It would be interesting to hear, though we never will, how much not having our starting TE and half of our starting RB played into usage.