An emergency No. 3 quarterback who was planning to redshirt just a couple weeks ago, sophomore Jalon Daniels could remain the Kansas football team’s starting QB after helping the Jayhawks pull off an upset win at Texas this past weekend.

Although KU head coach Lance Leipold said Tuesday during his weekly press conference he’s “probably not” going to officially name a starting QB heading into this week’s road game at TCU, Leipold said Daniels is “all in” on playing during the final two weeks of the season, even though that would mean no longer redshirting.

Asked if Daniels would start in the road finale, Leipold replied: “It could be that way.” The coach also said Daniels is “going to play.”

Daniels completed 21 of his 30 passes for 202 yards, threw three touchdowns and ran for another in KU’s striking 57-56 overtime victory in Austin, Texas. 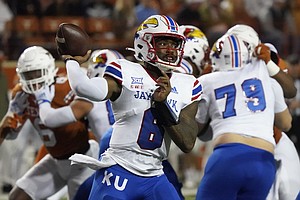 After Daniels played so well, the coaches knew they needed to find out whether the QB would be interested in diverting from the previous plan for his 2021 season, which was to redshirt. Leipold said he had “a lot of conversations” over the past few days, with offensive coordinator Andy Kotelnicki, quarterbacks coach Jim Zebrowski and Daniels, as well as the QB’s parents.

“We told the family that we would respect their decision on what they want to do,” Leipold said.

KU’s head coach said the whole process was one of the more positive collaborative decisions he’s been a part of.

The result of the Texas game and Daniels’ role in it, of course, changed everything.

“He sees the momentum of what this team is doing, what it’s done for our locker room and he's all in to help us build this program and he wants to play,” Leipold said of Daniels’ ultimate willingness to scrap a redshirt year and play in KU’s final two games.

The start at Texas was the 6-foot, 215-pound QB’s first of the season. Though Daniels competed with junior Jason Bean and senior Miles Kendrick for the starting job throughout the preseason, Bean won the top spot on the depth chart and went on to start KU’s first nine games.

However, both Bean and Kendrick suffered injuries during the first half of KU’s home loss to Kansas State on Nov. 6. That made it necessary for Daniels to finish that game at QB, marking his third appearance of 2021 as a reserve. When Bean’s injury lingered in the days leading up to KU’s trip to Texas, Daniels prepped for the potential start, and no one was sure whether he would play beyond that this season.

The 19-year old from Lawndale, Calif., hadn’t started a game since 2020, when he spent most of the pandemic-shortened season as KU’s No. 1 QB, even though he was a true freshman at the time. In seven appearances (six starts) a year ago, Daniels only threw one TD pass while going 76-for-152 (50%) through the air, with 718 passing yards and four interceptions.

This past Saturday, after completing 70% of his throws, not turning the ball over and hitting fullback Jared Casey for a high stakes two-point conversion to win the game, Daniels told reporters he’s “definitely a totally different quarterback out there” this year.

The contrast in his abilities to execute as a QB, Daniels said, has to do with the mental aspect of playing the position.

He now has a much better feel for what his receivers are about to encounter and what certain defensive fronts mean for the play KU is about to run.

“These are things that coming into college I had to learn,” Daniels said. “I had to learn over time. Honestly, this offseason really did that for me.”

If Daniels plays for KU at TCU on Saturday (3 p.m., ESPN+) as planned, it will mark his fifth appearance of the season, officially putting an end to the previous plans, because four is the maximum number of games for a redshirt player.

However, Daniels, like any player who was on a roster in 2020, can still take advantage of the NCAA’s blanket eligibility waiver from the pandemic. That would allow him to enter the 2022 season as the equivalent of a sophomore, with three more full seasons left to play. Leipold also pointed out that if for some reason Daniels needed to redshirt in a future season, he still will have that option, as well.

Leipold said the initial decision to redshirt Daniels, which came earlier in the season, was not based on the young QB’s play or talents. Rather, the coach said, the staff wanted to give him some extra time for his maturation process as a QB.

When it came time to revisit that idea over the past few days, Leipold said he didn’t want to dictate to Daniels and force the QB to play. The coach wanted to go with whatever decision the QB thought was best for him, because Leipold wants his players to know they can trust their head coach.

Leipold said the coaches were hoping Daniels would reach the decision that he did.

“It was one of the more unique balancing act decisions that I've had to make,” Leipold said. “But I was very comfortable with how I stated it, because I know that I'm being true to the player himself.”

Wouldn’t expect anything but “all in” from Coach Leipold or anyone else with the program.

Fourth down in your own end of the field for the win? Go for it.

2 point conversion for the win? Go for it.

Also looking forward to a double pass to Jared or another walkon.

It’s been the same all year. Just go for it.

While I admire Bean's spirit and will to compete......... it is clear and obvious that Daniels is who should be starting these last 2 games. There really is no comparison talent wise and this guy lit a spark to that offense that we haven't seen all season. He took his lumps last year, but you could see he had some tools. I was shocked to see him redshirt this year as I believed that he was probably our best option. I'm not the coach and I don't run the program....... but I am pretty sure that they redshirted this guy KNOWING that he would probably be our guy the next few years and they didn't want him to have to endure another season like last getting blasted behind a young and inexperienced offensive line. It is clear these guys haven't given up on the season and this team is starting to come together and improve. Still a ways to go, but as a fan I have more hope now and it's tangible, not just a pipe dream, than I have had in a while. Rock Chalk!!

I rewatched the 2-pt conversion. If it wasn't the end of the game, would/should have the refs called a targeting penalty on Texas #14 when he launched helmet to helmet on Casey?

Some feel a holding call against Kansas should have happened although that appears to me to be a rather tenuous argument. So, let's call it a wash. We win.

Wasn’t 14 the guy who dropped the easy interception? Six years in college, and all he knows are cheap shots.

I think any consternation about having Jalon Daniels after this season for only two more years is misguided.

The reality is, if things are improving, and I think they would be, Leipold is going to be pulling in other QBs. And if we're respectable -- likely because a lot of the play of Daniels -- we're going to be more attractive to both HS QBs and transfers.

In my mind, Jalon Daniels was the best player on the field last Saturday Night. And when was the last time we said that about a KU football player? It's been along while.

Yes, misguided because after this year JD will have 3 years left. The 2 year thing persists on this site. He has a Covid year plus his regular 2 years and this equals 3 years.

Jim Stauffer is absolutely correct, Daniels has three more years whether he plays in the remaining games or not. From what I'm reading and hearing, it sounds like him playing the last two games is highly probable.

Yeah, but Brian’s point is the same, and is accurate. (Are we now going to go back to grammar and punctuation policing too?)

Thanks d also not be so quick to assume we will instantly find better QB’s. Of the four beat QB’s in Kansa history, one was a DB, one was an RB, one was riding the bench and one was a legitimate star from the start.

Ask Texas or OU how easy it is to find top QB talent, even when you have the entire country to choose from

Brett - Were you trying to misspell words? Never seen that from you before, though you do make a good point about future players based on history. Nothing is guaranteed though hopefully we’re in a better place going forward with Coach Leipold and our current AD than we ever have been.

As for ou and ut, they’ve had plenty of really good to heisman winning QBs, even if the rest of the program hasn’t lived up to their lofty standards.

You are completely reasonable to take a breath and counterpoint. Nothing is guaranteed and this was only one game. Jalon may have progressed from last year, but I think in the previous 3 games this year he was still only completing 50-some % of his passes. Maybe he continues at a 70% rate but it is not guaranteed.

It’s also not guaranteed that we get 4 TOs including a pix6, which were all necessary to keep this from being another same old week in the bottom 10.

Lance joked well with Logan in the video. He’s going to be that much harder this week. Even if he isn’t it might feel like it and is necessary because they still need to work at least as hard. The next game is not guaranteed.

After checking the data, let’s put an asterisk by my previous comments. Jalon was 60% or less in really limited pass attempts in the first 2 games this season but was 68% in an emergency role against the purple kitties. That’s more encouraging.