Kansas football head coach Lance Leipold didn’t want the Jayhawks’ best showing of the season to date, versus Oklahoma on Oct. 23, to be a “blip.” And he definitely didn’t want KU’s level of play to plunge the very next week after experiencing such an encouraging spike.

However, Oklahoma State crushed the Jayhawks, 55-3, in Stillwater, Okla., seven days after KU threatened to upset the Sooners in Lawrence.

“We have a long way to go yet,” Leipold said following his team’s polar opposite performance, lamenting KU’s turnovers and inability to get the passing or running game going.

In their seventh consecutive loss, the Jayhawks failed to score a touchdown for the first time this season. They posted season-lows in points and total yards (143), as well as a season-high three turnovers. It was the first time KU went without a TD since a 27-3 loss to Iowa State on Nov. 3, 2018 — the day before then-head coach David Beaty was fired. 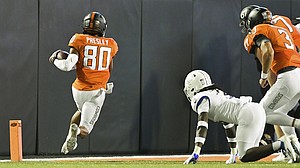 Leipold, just eight games — and six months — into his massive rebuilding project with the KU football program, said after the loss at OSU that the players are still growing under the new leadership and understanding more about what it takes to compete every week.

Whether the promise KU showed in taking a lead into the fourth quarter versus Oklahoma in late October is a “blip,” Leipold said, will be determined by “how we play the rest of the season out.”

Up to this point on the 2021 schedule, the OU game has been a temporary deviation compared to the way the Jayhawks (1-7 overall, 0-5 Big 12) have played versus FBS competition. KU lost, 35-23, to the unbeaten Sooners. In KU’s other six games against FBS opponents, the average margin has been approximately 50-14.

While trying to put the highs and lows of the first eight games into perspective, Leipold brought up that before the OU game, most of the discussions about the program centered around KU having a young roster and dealing with a coaching regime change that took place after the conclusion of spring football.

“That hasn't changed, OK. Three and a half quarters of football,” Leipold said, referencing the OU game, “didn't change everything, OK. It gave us some things to build upon.”

Leipold called playing OU (currently ranked No. 4) and OSU (now No. 11) in back to back weeks “big challenges” for the program, especially with the second game being at night on the road for the Cowboys’ homecoming game.

The Jayhawks, the coach added, need to learn and grow from the contrasting performances that came in an eight-day span, and Leipold wants them to respond.

The Jayhawks have four games remaining, and Leipold told the players after the lopsided defeat at Oklahoma State (7-1, 4-1) he expects them to regroup and improve. 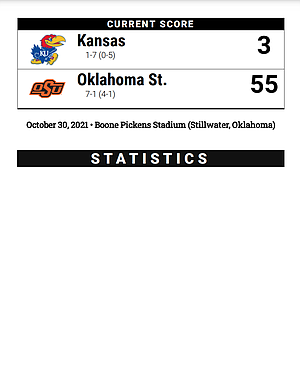 “There's no just playing this thing out, OK, the month of November,” Leipold said of his message. “We are going to prepare and play each and every day to get better.”

The way many of this year’s games have gone, Leipold said “unfortunately” at times he’s had to tell the players and coaches at halftime that they weren’t going to consider the scoreboard with their second-half attack.

KU trailed 38-0 at the half in two recent blowouts: at Iowa State and OSU.

“We don't play the score. Decisions that we make, we go back to 0-0,” Leipold said of the approach.

Even before the OU game, the coach said, he told the players exactly what he and his staff want to see from them in terms of effort and execution.

“When you turn on the film, you shouldn't be able to tell the score — whether it's a tight nail-biter or it's lopsided one way or the other. That's the goal of this program. And we'll get there,” Leipold said.

The Wildcats come to Lawrence having won each of their last two games, against Texas Tech and TCU.

K-State has won 12 Sunflower Showdown matchups with KU in a row. The Jayhawks haven’t defeated their in-state rivals since 2008, when Mark Mangino was still the head coach and Todd Reesing was KU’s quarterback.

“at night on the road for the Cowboys’ homecoming game” and a week after they were frustrated and we were encouraged. It would seem that all worked against us but nothing that isn’t expected at every program.

Against kstate, the kitties always seem more amped up than us. Hopefully we can see some improvement in all areas.

Or,
We are just not very good.

So, the last win against K state was in 2008 under Mark Mangino? Who was the boneheaded chancellor that fired Mark Mangino? It is quite obvious that KU’s board of regents and the committee that hired that chancellor were complete idiots. The school and the football program deserve all of their current problems for hiring such a stooge for chancellor.

Sorry, I'm not a Mangino fan. Had a couple good years. Lost his last 5 at KU. Many player complaints about him. Mangino didn't do well anywhere else. Flash in the pan. The real key to our good 2007 and Orange Bowl was Todd Reesing and several others.

He wasn’t terrible, but he wasn’t great.

Also, the AD fired him. The same AD who got us slotted into the Orange Bowl when it probably should have been Mizzou.