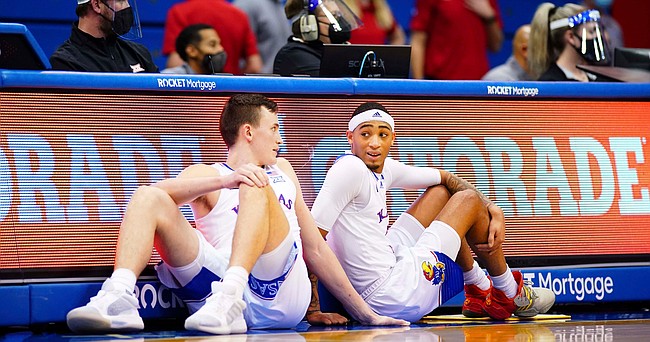 Kansas forward Mitch Lightfoot (44) and Kansas guard Dajuan Harris (3) have a chat while waiting to check in during the second half on Thursday, Jan. 28, 2021 at Allen Fieldhouse.

A home date with Missouri in December, two trips to New York City and a Thanksgiving tournament in Orlando highlight the non-conference portion of the 2021-22 Kansas men’s basketball schedule, which was released Tuesday.

The rebirth of the longtime bitter rivalry with Missouri was supposed to begin last season, but scheduling changes brought about by the pandemic forced the start of the six-year series to be pushed back to the upcoming season.

It will mark the first meeting between the two former conference foes since the 2011-12 season.

Prior to Missouri’s departure for the SEC in 2012, KU and Mizzou had battled in what was regarded as the longest uninterrupted college basketball series west of the Mississippi River. KU leads the all-time series 174-95.

KU’s season will open with an exhibition game against Emporia State on Nov. 3 at Allen Fieldhouse and then things get going for real on Nov. 9 against Michigan State at the Champions Classic at Madison Square Garden in New York.

The schedule also features a neutral-site clash with St. John’s in the Big 12/Big East Battle in New York, a road game at former Big 12 foe Colorado and a home game against Ivy League school Harvard, both of those in late December.

The Big 12 portion of the schedule, which will not be released until later this summer, will not start until Jan. 1.

“Once again, I believe we have put together a non-conference slate that will be great preparation for our league,” KU coach Bill Self said in a news release announcing the schedule. “It is certainly a very attractive home schedule with Missouri and our unnamed opponent in the SEC/Big 12 Challenge highlighting our games in Allen Fieldhouse. Then you have the Champions Classic against Michigan State, the Orlando tournament with a great field, going to New York for a second time to play St. John’s and going to Boulder to play Tad Boyle’s Colorado Buffaloes.”

While Self said he was looking forward to those high-profile games, he noted that KU’s less-heralded games are what will make the Jayhawks’ schedule one of the toughest in the country yet again.

UTEP, Stephen F. Austin and Harvard all have shown in recent years that they can compete with the best of the best in college basketball. UTEP, which KU will face at T-Mobile Center in Kansas City, Mo., nearly upset KU in last season’s regular season finale at Allen Fieldhouse. And Stephen F. Austin won at Duke in 2019.

“This is a very competitive schedule that I’m sure if we do well, it will enhance our chances for an excellent NCAA Tournament seed,” Self noted in the release.

Fans can secure season tickets today for all 17 home games, including contests against defending defending national champion Baylor and the rest of the tough Big 12 Conference, as well as Missouri and UTEP for as low as $500.

In order to purchase season tickets, fans must be active members of the Williams Education Fund.

What games are in NYC?

Is there a reason there is only 1 exhibition game this year?

Haven't had a chance to ask that yet. My guess would be because Washburn played the regular season game last year, they're out this year and they want to try to keep Emporia State and Washburn, along with Fort Hays and Pitt State, paired up every other year. Haven't heard anything saying that, but I wouldn't be surprised to see both Pitt State and Fort Hays back on the exhibition schedule next year and Washburn and ESU the year after.

I'll look into it, though.

I see 2 L's in this schedule - St John's and Missouri. They are both Loser programs. Seriously - I think we will be able to wear teams down by the sheer numbers we have on our team. When our roster is finally set we will have like 20 or 25 guys on it. That's like 95 to 120 fouls to give per game. No team in the country is going to be able to match that. RCJH

I'm not sure that makes sense or a very good idea. The average number of posessions for each team in college basketball is about 70. So if you fouled them on every posession, that would be about 70 times, after the one and one, that would be 133 foul shots. And at a low free throw percentage of just 65% those teams would score 86 points.

Which proves HCBS philosophy, you gotta play defense, make them miss, get some stops.

By the way, not disagreeing with your St. J. and MU assessment, but normally an "L" on the schedule means "Loss" not "Loser" and I am a smidge supersticious and don't like things jinxing KU.

Rodney...did you have the sarcasm font on capital???

Brian - wayyyyy too literal, you need to relax a little, enjoy a little sarcasm. I am sorry I tricked you.