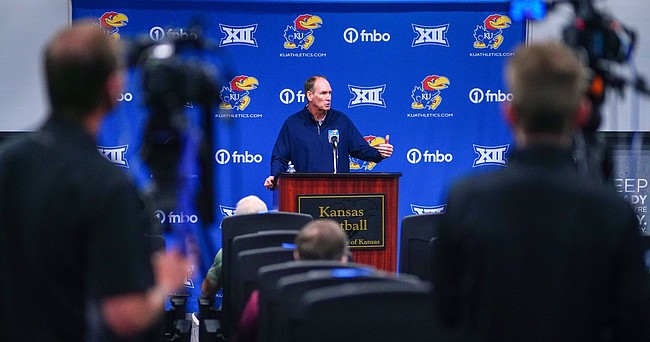 Arlington — Day two of the Big 12 Conference’s football media days commenced Thursday morning at AT & T Stadium without Kansas head coach Lance Leipold and the two Jayhawks who were scheduled to join him.

Severe weather back in Lawrence, where KU’s private jet was set to take off and carry the program’s representatives down to the event, prevented the jet from taking off as planned.

Leipold said during an interview on ESPNU that he began receiving text messages early Thursday morning that alerted him that weather in the area was limiting available windows for taking off.

Instead of meeting with droves of media members in person and hopping from interview to interview throughout the day, Leipold, super-senior receiver Kwamie Lassiter II and junior safety Kenny Logan Jr., KU spokesperson Daniel Berk said, will conduct such sessions remotely, via both video and phone calls.

Leipold said he was “really disappointed” for Lassiter and Logan, who instead stuck around KU’s football facilities with their head coach.

This would’ve been the first time for Leipold, Lassiter and Logan to attend the Big 12’s annual summer preview event.

You know what they say, you can plan a pretty picnic but you can’t predict the weather…😒

Couldn’t make it to #Big12MediaDays due to weather, but we’ve still got you covered with content from Rock Chalk Headquarters!

I think I’d rather have them on a commercial plane that a small private plane anyway… At least they were smart enough not to takeoff in bad weather.