AP File — Kansas football hired Mike DeBord as its new offensive coordinator on Feb. 2, 2021. DeBord, Tennessee's offensive coordinator at the time, is pictured in this file image walking off the field after his team defeated Georgia 38-31 on Saturday, Oct. 10, 2015, in Knoxville, Tenn. (AP Photo/Wade Payne)

KU has hired college football coaching veteran Mike DeBord as its next offensive coordinator, the university announced Tuesday, less than a week after the previous coordinator’s departure was announced.

DeBord, who has more than three decades of experience in coaching, most recently worked as an offensive analyst for Michigan in 2020. He’s also worked in the offensive coordinator position for several programs, as well as doing some work at the professional level.

“We are adding a coach with a wealth of experience in Mike,” Kansas head coach Les Miles said in a news release. “He has squared off with just about every defensive scheme in the book, and has worked within and led several offensive systems.”

DeBord also has experience as a head coach — at Central Michigan, where he went 12-34 from 2000 to 2003 — and in the professional ranks. He worked as the tight ends coach for the Chicago Bears from 2010 to 2012 and as a tight ends and assistant offensive line coach for the Seattle Seahawks from 2008 to 2009.

Miles and DeBord have some history together, as they were both assistant coaches at Michigan in the early 1990s, when Bo Schembechler led the Wolverines.

“I have had the honor of working alongside Mike before, as have some of the best coaches in college football and the NFL,” Miles said in the release. “He makes his fellow coaches better, and will have an instant impact on the Jayhawks.”

DeBord said in the release that he was “looking forward to reuniting with Les Miles, and joining his mission of building Jayhawk Football into a championship program.”

“I love coordinating offenses and helping the players become better individually, and as a unit to help us win,” DeBord said. “That will be done with the great help of the offensive coaches, and the buy-in and hard work by the (players).”

DeBord will be replacing Brent Dearmon, who left this past week to become the offensive coordinator at Middle Tennessee State. Kansas has now had four offensive coordinators since Miles took the helm in late 2018 — the other two were Chip Lindsey, who left to become the head coach at Troy, and Les Koenning, who was fired six games into the 2019 season.

The Jayhawks began their team strength and conditioning sessions for the spring semester on Monday. KU has not yet announced when spring practices will begin.

Howard Schnellenberger is still alive, maybe we could hire him as an assistant coach. Why don't we just scrap the whole coaching staff and hire Lou Holtz.

Does anyone know anything about DeBord? Opinions (based on familiarity, please)? 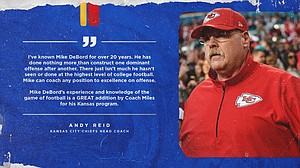 Thanks. I have tremendous respect for the opinions of Andy Reid. Comments like this set my mind at ease, at least until I see what DeBord can do at Kansas.

I'm very surprised that Andy Reid would be answering questions about KU Football just days before he coaches his team in the Super Bowl.

Not knowing the context of this quote I would assume that if it is from a published statement that it likely didn't come direct from Coach Reid. But if this came directly from Reid, for instance from an answer he gave during a media session then it says a lot about how he feels about DeBord. He could have simply said "Mike DeBord is a good hire for Kansas", but he didn't say that. He said so much more, and if it really did come direct from Reid then that speaks volumes about how he really feels about coach DeBord.

Maybe this link will dispel any doubts you have, Jonathan. Note it's from 247sports which also notes it was shared on the Kansas Football twitter account. FYI, I don't post quotes I have not first checked out unless I specifically state I've not checked. . https://247sports.com/college/kansas/Article/Andy-Reid-Mike-DeBord-a-great-addition-for-Les-Miles-Kansas-football-160368515/

Good news that the position was filled quickly, especially with a major offensive recruit still to be signed. My initial reaction was that we hired a pro, and someone Miles could quickly and thoroughly reference-check. Plus the familiarity of Miles with DeBord should speed up the transition.

DeBord’s age is not encouraging and neither is his longevity.

Andy’s comments are encouraging as are some of the from his stops.

Capability is one thing... but DeBord has never been anywhere longer than 4 years. This is his 9th stop since 2000. Continuity a concern as we will likely be looking for our 5th offensive coordinator in 1-2 years... based on DeBords track record.

Some additional thoughts on this hiring....Taking over the offense this late means, to a large degree, understanding and embracing Dearmons offense. Certainly, I expect DeBord to put his imprint on it but we can’t start spring ball installing a new offense and new terminology after just installing a new system the past season-and-a-half.

So we hired an old pro who has seen it all and coached it all. Someone who can quickly master and teach the existing system while he slowly starts to make it his own.

And we must keep in mind what the candidate pool probably looked like. We were winless last year. We are viewed as a career-killing stop by a large percentage of coaches.

I think that Miles wanted someone who could assess the talent we have quickly, identify the defensive strategies we will be facing and keep the chains moving. Let’s hope DeBord is that guy.

Bret, He said in his presser that he will install his system after evaluating the players. He indicated it is not a set system such as Dearmon had but that he would design an offense around KU current roster. Tells me we won't see much in detail in the Spring, but Spring will be used to see what our guys can do and Fall will be the installation of the actual system.