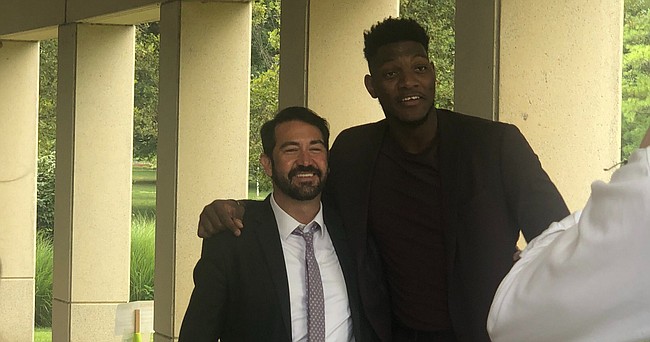 Former University of Kansas basketball player Silvio De Sousa was found not guilty of aggravated battery on Thursday in a case where he was accused of striking a man in the face and causing him to lose sight in one of his eyes.

Immediately after the verdict was read in Douglas County District Court, De Sousa was visibly elated as he grabbed onto his attorney, Hatem Chahine, who successfully argued he should not be held accountable for the man’s injury.

“Man, it feels great to just feel free and not have to wake up the next day feeling like I’m being held back,” De Sousa told reporters outside of the district court facility. “I knew since day one I (was) not guilty. I had to go to the (conference) room and cry for a little bit.”

De Sousa was originally charged with aggravated battery, a level-five felony, and was accused of punching the man in the eye outside of a downtown Lawrence bar in the early hours of Jan. 1, 2020. The injury to the man’s eye was so severe that an eye specialist testified that he had lost a lens and would never be able to see out of it again.

But the jury found De Sousa was not responsible for the injury. Jurors additionally chose not to consider lesser battery charges that Judge Sally Pokorny said were available to them, despite the fact that Chahine acknowledged in his arguments that De Sousa struck the man during the incident.

While making his closing arguments to the jury on Thursday, Deputy District Attorney Joshua Seiden said De Sousa should be found guilty of aggravated battery for recklessly hitting the man and causing bodily harm to him.

He pointed to the injured man’s testimony about the incident, which took place on Jan. 1, 2020, outside Brothers Bar and Grill, 1105 Massachusetts St. The man, who is a Johnson County resident, said he had come to Lawrence alone to celebrate New Year’s Eve.

Shortly after midnight, the man testified that he was outside the bar and heard De Sousa arguing with a woman he was with. The man said he told them to “shut the (expletive) up.”

The comment led to De Sousa striking him in the eye, which caused immense pain and caused his eye to bleed, Seiden said. The man then went to a nearby park to rest on the bench and wait out the pain. He eventually went to his car, where he tried to sleep, but he felt nauseated and realized he was seriously injured.

Seiden said the man then drove himself to the hospital, where doctors began treating his eye and he met an officer who began investigating the case.

De Sousa and those who witnessed the altercation all testified that De Sousa had struck the man in some manner, but they differed on the details. Seiden pointed at the conflicting testimony of the two women who were with De Sousa that night. One, who was dating De Sousa at the time, said she saw De Sousa slap the man, but not forcefully enough to severely injure him. The other woman said that she saw De Sousa hit the man, and that the contact made the man immediately bleed from the eye.

Seiden argued that the conflicting testimony might have been because of the first woman’s relationship with De Sousa. Although they are no longer dating, De Sousa said she is still close with him and has been throughout the proceedings of the case. Meanwhile, the other woman was no longer friends with the woman De Sousa was dating. Seiden said the other woman testified that she had a falling out with the woman De Sousa was dating because their stories about that incident didn’t match up.

Seiden said that when the man went to the hospital, doctors said he needed to see a specialist for his injured eye immediately. Seiden said the eye specialist, Dr. David Dyer, testified that the man’s eye was severely damaged and that he needed several surgeries just to keep it intact.

While Dyer kept the man from losing his eye, he could not save the man’s ability to see out of it. The man will never have vision in his left eye again, Dyer said.

Seiden was also skeptical of De Sousa’s own testimony, in which he said he slapped the man by bringing his arm down in a vertical motion. Seiden said that would be inconsistent with a slapping motion.

Chahine, meanwhile, repeatedly argued that De Sousa did not punch the man, but rather slapped him on the cheek. He said the force of a slap could not cause the injury the man said he had suffered from the incident.

Chahine also pointed to conflicting testimony provided during the trial. While the two women did not have the same story, he also said there were dozens of people outside and around the bar where the incident occurred, and none of them had images or videos of what happened, suggesting the jury could not take them at their word.

Chahine also argued that the injury the man suffered was inconsistent with what people saw, because he did not fall to the ground or ask for help, but rather walked off on his own. He also said the man neither called for an ambulance nor called 911 to report the incident — instead, the man showed up at the hospital hours later with an injury to his eye, where he saw a police officer and reported the incident.

Now that the not guilty verdict has been rendered, De Sousa faces no more criminal charges from the incident. The jurors decided not to consider a lesser charge, such as misdemeanor battery, which they could have done if they believed he was guilty of that instead of the more severe aggravated battery.

Chahine told reporters the misdemeanor battery charge was actually the charge he and De Sousa believed was appropriate when they were initially pursuing a diversion in the case earlier this year.

A diversion is a process whereby someone accused of a crime is “diverted” from the usual legal procedures and instead completes the terms of an agreement, which may include some sort of rehabilitation program or fine. If the program is successfully completed, the criminal charges could be dropped.

However, talks with prosecutors over the diversion broke down, and De Sousa chose to go to trial and make the case that he was innocent. Chahine said he believed De Sousa had always told the truth about the incident, and that De Sousa’s testimony was the same as what he told police when they were investigating.

“The damage that was allegedly caused was very severe, so it was a very serious matter,” Chahine said. “But when I met with Silvio, he told me exactly what happened, and it didn’t match the injury.”

He said he was glad that the argument resonated with the jury.

“I’m glad the jury saw that,” Chahine said. “I’m very happy with the verdict, and I think it’s a just verdict.”

De Sousa, who is originally from Angola, said that with the case resolved he can now travel home and see family. Additionally, he recently committed to play basketball at the University of Tennessee at Chattanooga.

“Now it’s a new start and I just need to focus on what matters the most from now on,” he said.

The Douglas County District Attorney’s Office provided a muted response when asked for comment about the verdict.

“While we are disappointed in the verdict, this office respects the jury system and thanks them for their service,” District Attorney Suzanne Valdez said in a statement provided to the Journal-World.

But wait. I thought he was already convicted - here, by a majority in the court of public opinion. Facts can be so inconvenient when they get in the way of drama and public opinion.

And people are so quick to rush to judgment when they know nothing other than what they read or hear from the media, professional and social. Kind of like when the public convicted Vick of pushing that woman down the stairs, until the security video showing she was doing the pushing was made public. People. Fickle.

If only his lame coach had stood behind him when he was clearly in the right.

And Dirk, that generalized bs you always pull is trite and repetitive.

trite and repetitive, really? McCoob you are on fire!!

I remember the rage at the end of a blowout game after a dunk that meant nothing. That a coach saved him from hitting someone with a stool raised over his head.

When someone shows you who they are believe them the first time. - Maya Angelou

Trite and repetitive. The English language can be tricky.

I wonder who was in the original jury?

Looks like I owe Silvio an apology for rushing to judge him without having the whole story. I was quick to judge after what I saw of him in the KU-KSU brawl in 2020, and I shouldn't have been. Here's wishing him the best at UT-Chattanooga.

Good luck with your 2021-2022 season with the UT-Chattanooga Mocs. Hopefully, you'll enjoy the basketball season that you've been dreaming of having. And, good luck on all future endeavors that you will journey towards.....

Will there be a civil suit filed? Unless there was some intervening event between the incident and the time the guy showed up at the hospital to be treated (and assuming he did not attempt to physically assault DeSouza) it would seem that Silvio's assault was the cause of his loss of sight.

Maybe the prosecution was not very good at presenting their case and evidence.

Bob - Good point about a civil suit. Like OJ found out, there is a lower bar of proof in civil matters. That being said, I think it becomes privately funded instead of public. There also appears to be a long period of time that’s unaccounted for accept for the accuser’s words, not that he would have any reason to be “creative” in his account of the night’s events. If he got into an altercation with someone else, guessing they won’t be coming forward to admit to causing his injury.

well, I am happy for Silvio. I still do not understand how a person can strike a person, whether it be a slap or a punch, and that is not some type of assault or battery. There is an admission of striking another person and I guess in this case that was considered okay. I assume the jury felt the victim must have gotten hit by someone else later to cause the damage, but the fact that Silvio admitted hitting him should warrant some penalty. I guess not, in this jury's decision.