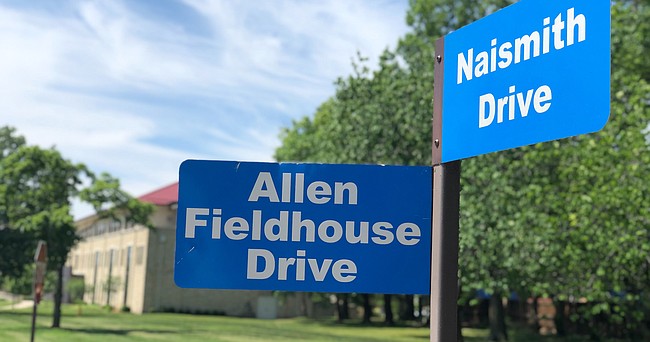 McCarthy Hall, shown here at the intersection of Naismith and Allen Fieldhouse Drive, is home to the Kansas men's basketball team.

As college athletic programs across the country continue to work to stay safe in the face of competition under the COVID-19 pandemic, Kansas basketball coach Bill Self said his team was as equipped as any out there to handle the current climate.

“We have as good a bubble situation as anybody in the country, with McCarthy Hall,” Self said of the KU basketball dorm that sits just south of Allen Fieldhouse. “We bring our student athletes their food. They don't even go out to get their food.”

Senior forward Mitch Lightfoot said Thursday that the ability for him and his teammates to stay in mostly isolated environments — between McCarthy Hall and Allen Fieldhouse — has helped the Jayhawks' keep their focus.

“They made it in a way that we can be secluded,” Lightfoot said of KU's living quarters. “We get our own rooms, our own individual places to live, (we're) pretty secluded from other people on campus, so I think that's something that we can use to our advantage.”

Beyond that, Self said Thursday, during a Zoom call with reporters, that the Jayhawks sit six feet apart and wear masks in the locker room and are constantly reminded about ways to stay safe at practice and on campus.

“It's stuff that our players have bought into,” he said. “But that doesn't mean that guys can't have contact with somebody that's been exposed at any point in time, nor coaches or anybody else.”

For that reason, Self admitted to being worried about the pandemic's potential impact on the upcoming season, which is scheduled to open Nov. 26 against top-ranked Gonzaga in Fort Myers, Fla.

“I am concerned,” Self said. “I'm concerned a lot. … All we can do is try to do what we can to remain as safe as possible, (while) knowing that even if we do that, that's still not a guarantee for anything.”

Self said Thursday that almost everything the Jayhawks have done this preseason has been reshaped by the pandemic.

That dynamic, which has allowed for a lot of installation but very little emphasis on perfect execution, has the Jayhawks both ready to open the season and aware of what could lie ahead.

“We haven't even played a game yet,” senior walk-on Chris Teahan said Thursday. “We have two weeks to prepare for our first game and we're just kind of focused on what we can do this season.”

A handful of programs already have shut down practices for two weeks because of the virus during the preseason. While that move cost those programs valuable practice time, it did not impact their record. Self said that kind of stoppage during the upcoming season would hit any program hard.

“A shutdown is going to mean a team that's playing a tough schedule (will) go 0-6 (during that time),” Self acknowledged. “I mean, that's just the reality of it.”

Whether that's because the team forfeits games or has to play with a skeleton crew, the impact of such an disruption on a team with a 14-man roster has the Jayhawks holding each other accountable to staying smart and safe in preparation for the season.

“We need to be disciplined and do everything we can to give us the best chance to to play, just like everybody else does,” Self said. “But there (are) so many things out there that (are) beyond your control. … I don't think it's going to be unusual for anybody to get shut down based on this. It may be the team that only gets shut down once as opposed to twice for a year (has the best chance to win).”

KU's Mitch Lightfoot on why he was able to take more 3-pointers during redshirt season by KUsports.com

Chris Teahan on how former KU players Devon Dotson and Udoka Azubuike will translate to next level by KUsports.com

My thoughts on today......Friday the 13th: 1. “Pandemic”.....by the dictionary, yes, this qualifies as a pandemic. So does the flu....every year. We don’t say the flu pandemic every year, we just say it’s flu season again. Same holds true. Several years from now it will simply be “flu and COVID” season again. 2. Thank God there is still a 99.8% survival rate and getting better with every person that gets it and recovers. 3. I agree with being cautious as elderly and those with other health problems are at most risk. With that said, it has been used as a political tool as it saddens me where we are as a country. Truly saddens me. 4. Stay safe, but please don’t forfeit your life and freedoms for it. Do you have any regrets from yesterday? If so, it’s too late. You will never get yesterday back. Live life people, live it to the full. 5. Hoping for a great season in basketball. After the football disaster, we could use some feel good victories. RCJH

Don't be holding your breath about a Season already seeing Cancellation of Games - -Ivy league has already Cancelled Winter Sports -I think this is just the beginning. Your gonna see more Schools follow suit.

Just read off other site about how the Schools are struggling to keep the Season going in football especially the Big 10 -& Big 12. - -broke down Conferences and their spike in the COVID. - -Shows the Schools in the Big 12 and Ku had like a 136 % spike in cases of COVID per 100,000 people that's the 2nd most in the Big 12. - Were starting to see High Schools , elementary Schools going to remote - -AGAIN. - -just don't think the odds are in our favor for a Season or very much of one this will make the 2nd Season where the scheduled has been screwed with because of the COVID and it's not going anywhere soon

Here's hoping no KU players, staff or students get Covid19. I realize that's not going to happen, but with the stories of permanent damage being done to heart and lungs and possible other internal organs even to people who get it and recover, it's a great risk until the vaccines arrive and hopefully protect enough people to stop Covid from spreading.